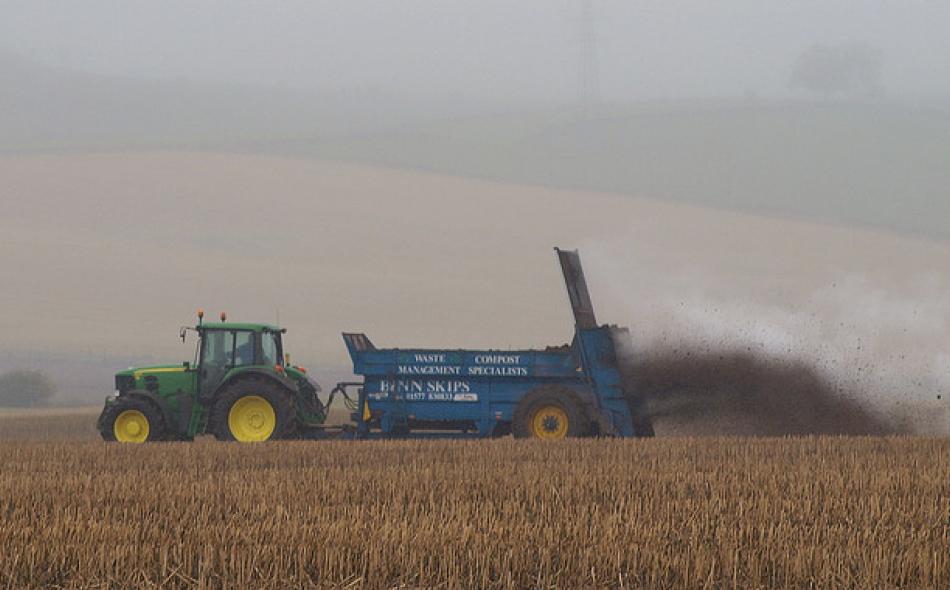 As reinforced by the Marsden Farm study, the risks manure poses to health and the environment are drastically reduced by spreading it out, e.g., when used as a fertilizer, transforming it from a liability into a valuable asset.

It’s ironic that agriculture, an activity that is fundamental to sustaining large societies, has come to present so many risks to public and environmental health. As farms have grown larger, more productive, fewer in number, and more specialized over the last century, they’ve come to produce some less than desirable byproducts, just like any other major industry. But farming isn’t just another industry; it’s based on ecological principles and natural systems, which, if managed carefully, can be used to promote rather than harm health. A recently published study out of Iowa State University suggests that smart diversification and re-integration of plant and animal systems on the farm can pave the way to a healthier, more balanced agriculture.

Farmers have always had to manage soil fertility carefully or lose the foundation of their livelihood. For much of history, animal manure was our primary means of renewing that fertility. With the advent of cheap, effective synthetic fertilizers and herbicides in the early 20th century, long-term productivity became wholly divorced from its animal origins for the first time in history. Animals became unnecessary for large-scale plant production and economies of scale became possible; soon, fossil fuel–based fertilizers were being applied liberally to single-crop fields across the world. In parallel, animal operations also became more concentrated and monocultural, relying on less and less space and more commodity-derived feed. In this new scenario, animal manure was transformed from an essential link in the nutrient cycle into a potentially dangerous waste product.

The health risks of agriculture in the status quo

In a nutshell, that’s why most American farmland today is densely populated by large monocultures of commodity crops and livestock, but productivity has come at a cost. Though this highly specialized mode of agriculture boasts historically unprecedented yields, it also generates a slough of harmful externalities for human and environmental health that aren’t reflected in the publicly supported price of its products. In order to remain productive and profitable, conventional commodity production requires ever-higher levels of inputs in the form of fossil fuel–based fertilizers and herbicides, while animal agriculture produces a toxic surplus of fertility in the form of concentrated manure. It is well documented that both of these excesses pose significant risk to human and environmental health, as they regularly enter into surface- and groundwater and ultimately play a central role in the eutrophication of downstream waters, like that currently underway in the Gulf of Mexico. Additionally, closely confined livestock production has produced a high reliance on the large-scale use of antibiotics, which can also enter groundwater and pose a risk for human populations.

A successful fusion of farming methods and mentalities

Researchers from Iowa State University, USDA and the University of Minnesota have recently offered new evidence that carefully integrating animal and plant systems can dramatically decrease these health risks of industrial-scale agriculture. The controlled field trial took place over eight years at the Marsden Farm in Boone County Iowa—the heart of the Corn Belt—and was more important for its fusion of methodologies than for any particular innovation. Researchers simply took well-established integrated grazing and rotational practices and applied them to a conventional Midwestern commodity growing scenario, then compared costs and productivity over time.

In short, they de-specialized the farm by treating cattle—and their manure—as an essential part of the nutrient needs of corn and soybean production. In conjunction with a simple, extended crop rotation of alfalfa and small grains, the Marsden Farm study showed that integrating livestock into corn and soybean production protected or exceeded yields as well as profits over time compared to a conventional corn-soybean rotation. Critically, though, the improved rotation significantly reduced the amount of fertilizer inputs and loweredtheneed for herbicides by 88 percent. With these reductions came a huge reduction in factors that can impact human and environmental health down the road, and all without any loss of productivity. The study showed how much we have to benefit from closing the nutrient cycle: manure only poses a substantial risk to health when it’s concentrated and stored, but in such a diffuse application, even at a large scale, it can be a valuable asset.

Though farm profits remained stable between the conventional and modified rotations, the nature and proportion of production costs changed dramatically. Because successional grazing and rotation is much more labor-intensive than the two-step corn-soybean rotation used across much of the Midwest, labor costs rose as fertilizer costs dropped. Incidentally, this means that diversified practices end up providing an economic boost for American farm workers, who end up with a share of farm expenses that would otherwise go into the pockets of large fertilizer manufacturers.

The Marsden Farm study is particularly valuable  because it offers an achievable vision for a healthy, productive 21st-century American agriculture that bridges the often polarizing divide between “conventional” and “sustainable” mentalities. It shows that it’s possible to balance health and long-term viability with a large-scale, highly productive commodity operation, a balance that could potentially be fostered and further explored by a number of existing Farm Bill programs. Such a  “middle path” approach will likely prove to be a relatively politically attractive avenue for systemic movement toward a healthier agriculture.

Indeed, there are existing Farm Bill programs that can support further development of integrated systems. The Environmental Quality Improvement Program (EQIP) is a conservation program that offers incentives to farmers to better manage their nutrient inputs and outputs, among other things. The Sustainable Agriculture Research and Education (SARE) program also offers research grants annually to farmers across the country who are willing to conduct on-farm research for more sustainable practices. In general, the Research Title can be a powerful tool for change, as it provides ample opportunity to incentivize and explore alternative modes of production—though research funding in the Farm Bill tends to support conventional systems.

Obstacles certainly remain for those looking to adopt the vision proffered by the Marsden Farm study: fertilizer producers and other major agribusiness groups are sure to leverage their powerful lobbies against such a change, and commodity farmers themselves have invested so many resources (capital and otherwise) into the current mode of production that downstream externalities don’t necessarily provide a compelling enough argument to fundamentally change the way they operate.

A long-term vision for healthy farming

Other recent research is also making a strong case for agricultural diversity and public health. A new paper in BioScience is among the chorus of voices arguing that agricultural diversity and integrated systems have a major, multifunctional role to play in securing the long-term health and stability of the food system, specifically as the effects of climate change threaten to destabilize agriculture across the globe; past United Nations research echoes this assertion.

In all, the emerging picture of integrated farming systems gives public health advocates another reason to hope that agriculture can become a sustaining force in our society, one that combines large-scale agricultural productivity with clean waterways, long-term resilience, healthy animals and healthy people.

Michael Pursell is a researcher on health and agricultural policy currently on contract with IATP.