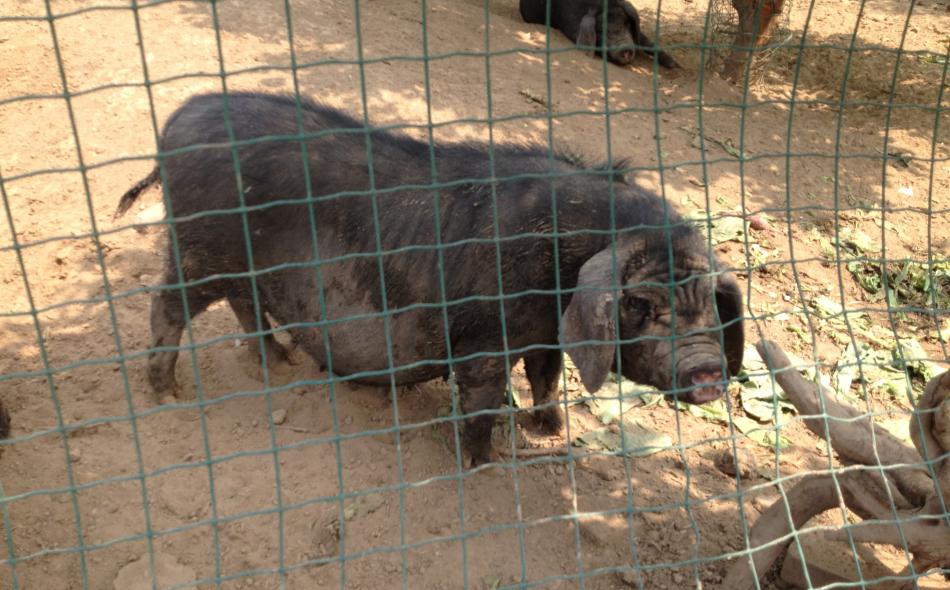 Two Converging Rivers—That’s what Shuanghui means in Chinese, apparently. It seems appropriate when we look at the scale at which both Shuanghui and Smithfield operate in their respective countries. Shuanghui is said to be China’s largest meat manufacturer and Smithfield is the largest pork processor in the United States. It’s a convergence of two very big and very dirty rivers. Contrary to the common theme in media reports on the acquisition, food safety problems and environmental pollution are not just the domain of the Chinese livestock industry. One doesn’t have to look very far to see Smithfield’s own record in this regard. Unmanageable non-point source pollution from concentrated animal farms, antibiotic resistance, disease and chemical-related deaths related to poultry factories are very much associated with and originate from the American model of industrial livestock production. Smithfield was embarrassed after an undercover video of animal cruelty was taken from one of its plants and released by the Humane Society. The video won the 2012 Webby Award for “Public Service and Activism.” The irony is that China is wholeheartedly adopting the American model precisely to deal with food safety and environmental pollution concerns.

The Smithfield acquisition acutely brings home one—albeit overlooked—fact: it’s a globalized industry. Just look at Shuanghui’s shareholders: CDH Investment, Goldman Sachs, New Horizon Capital, Kerry Group, Temasek and its own management and employees. As Peter Fuhrman from China First Capital puts it, “A Chinese company isn’t buying Smithfield. A shell company based in the Cayman Islands is.” Morgan Stanley plans to help finance Shuanghui’s acquisition. While everyone analyzes all the angles of this “takeover,” capital markets on both sides of the Pacific are responding with rising shares for both Smithfield and Shuanghui. Clearly, if investors have anything to say about it (and they will), the deal will sail through without any problems from U.S. regulators. After all, the deal has been in the making since 2009.

IATP’s President Jim Harkness and I spent the last two weeks in China talking to various people about the changing face of meat production there (see photos from the trip on IATP's Flickr). Our aim: to understand the structure of the meat industry in China (particularly pork and poultry), to what extent it’s similar or different from the U.S. model of factory farming, and what China’s plans are in meeting its domestic demand for meat and dairy. Why? Large-scale industrial livestock production and its consumption are leading to a host of problems, in China and in our own backyard. Elsewhere around the globe, the explosion in industrial meat production in the past few decades has linkages to massive changes in patterns of global land use, as huge areas of South America, for example, have been converted to soy production for animal feed. The factory farms themselves are a major source of land, air and especially water pollution. The production process and the meat itself pose new worker safety and public health challenges. As the world’s second largest economy, with the fastest growing demand for meat, China is ground zero.

The Smithfield story broke while we were still in Beijing (See Jim’s blog). Many Chinese policymakers are still digesting the news and making sense of it. Shuanghui is a private company so the Chinese State doesn’t dictate its actions, but Shuanghui’s acquisition definitely plays into the larger narrative of where Chinese livestock production is going and the choices that Chinese policymakers and consumers will make in the coming decade.

The media figures on backyard farming in China have varied widely, but a trustworthy source is Rabobank, a Dutch Agriculture Bank that is interested in investments in the Chinese livestock industry. According to Rabobank research, 51 percent of China’s pig farms ranged from raising 50–3000 pigs in 2010. These are referred to as “specialized farms” and often seen as the culprits of food safety and pollution problems associated with the Chinese livestock industry. The number of specialized farms is expected to increase to 57 percent by 2015. The number of commercial farms (raising over 3000 pigs per year) is estimated to increase from 12 to 15 percent between 2010 and 2015. According to the various sources we spoke with, Chinese policymakers favor the commercial farms because they see them as the solution for food safety and pollution, but they also recognize that specialized farms will continue to produce most of China’s pigs. Hence, they are trying to modernize these farms with more mechanization, standardized feed and ensuring that the farmer has workers that can tend to the confined animal facility. To what extent local, provincial and the central government can ensure this happens remains unclear, but what became clearer in our many discussions with a range of academics, industry and farmers was that the food safety and pollution problem was not just related to these farms or farmers, but to the value chain in general—the feed mills, the pharmaceutical industry, the American breeds chosen for mass production which are much weaker than the Chinese breeds (and thus more sensitive to environmental changes), the middlemen that take these pigs to the slaughterhouses and the processors themselves.

The lack of arable land, pig-breeding technology and know-how, rising costs of production, farm management, food safety and environmental pollution were often cited as reasons why China might be better off importing meat than producing it at home. One source said that almost every ministry agreed with that line of thinking, except for the Ministry of Agriculture. However, China has invested a great deal in its livestock production—pork in particular—and given China’s demand, it isn’t likely that the government or its many private players will confine themselves to any one strategy to meet this demand. Diversification is a key part of China’s overseas investment policy—not to be overly dependent on any one country or company for any particular resource.

A real grey area—and a neglected one in the merger discussion—is Chinese demand. Just how much more meat will Chinese consumers eat and at what cost including costs to their personal health and the environment? We witnessed a small food revolution happening in Beijing and heard about growing organic farmers markets in over 200 places in China. We also met pig producers growing domestic pork and selling it in the organic market. Urban consumers are very concerned about food safety. Media reports suggest that this may be one more reason why the Smithfield acquisition will be a success: U.S. imported pork may be seen as safer than Chinese grown, but perhaps growing concerns about health may also lead Chinese urban consumers in a different direction: eating less meat over time. Chinese urban consumption has been rising steadily, along with obesity.  Recently, UK members of Parliament issued a report recommending that the UK government spend more effort on raising awareness about reducing meat consumption given its global impacts on food security and hunger. Perhaps it’s not too naïve then to dream that this might just become a real debate throughout the world in the coming decade as we approach our ecological boundaries from a health, environment and food security perspective.