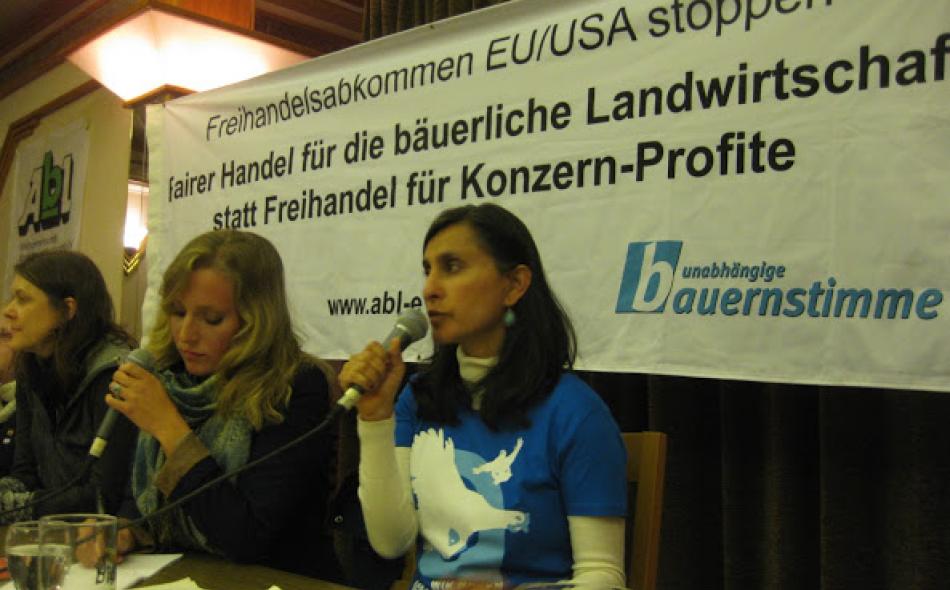 IATP's Shefali Sharma speaks to a packed room in Westerstede.

Earlier this month, IATP was part of a six-event speakers’ tour organized by the progressive German farmers’ organization, ABL and sponsored by over 20 German organizations on the proposed U.S.-EU free trade agreement. The tour, spanning north, south east and west, drew an amazing response over the last two weeks as we literally moved around Germany. Crowds of anywhere between 200 people on a Wednesday evening (in Dresden) to 70 to 100 people on other weeknights in rural communities came to learn and engage on the implications of TTIP on food and agriculture on both sides of the Atlantic. They were interested in hearing the “U.S. perspective,” but I was joined by prominent leaders of the food and farming movement in Germany and Europe at the various events, like the president of the European Milk Board and head of its German association BDM (Bundesverband Deutscher Milchviehhalter), Romuald Schaber and the Board Chair of ABL, Georg Janssen, as well as other local and regional farm leaders of ABL.

Two-hour sessions usually turned into three (often lasting till 11:00 at night) as rapt audiences took part in emotive sessions of questions and comments about the state of U.S. food and agriculture, U.S. policy tolerance for widespread use of antibiotics and growth hormones in meat production and similar trends in the EU, the lax attitude of American policymakers (and consumers) on genetically modified food compared to Europeans and what activism there was in the U.S. on TTIP. They also expressed frustration about the direction in which European agriculture is heading, on the heels of a heated political debate in Germany about Chancellor Angela Merkel’s abstention from voting to stop the approval of Dupont’s new variety of GM maize entering the European feed market. They wanted Germany to block the approval. Many voiced anger at the European Commission’s tacit support of agribusiness interests over strong citizen interests on food safety, quality and support for local, ethical and agroecological production, and acknowledged that TTIP was being pushed by a common agribusiness agenda on both sides of the Atlantic. And they voiced serious dissent against EU’s undemocratic process of trade policymaking where the European Commission holds all the cards while elected officials get scant details about the content of the negotiations.

I spoke about the upcoming fight on fast track in the United States where we too struggle with near complete opaqueness in trade policymaking with Congress not even allowed copies of draft negotiating texts. Our hope is to stop the Obama administration’s attempt to win “fast track”: the administration’s attempt to limit Congressional authority to a yes/no vote on approving FTAs like TTIP and the Trans-Pacific Partnership (TPP), rather than debate and amend the content of the treaties. The Europeans gave up that right when the Lisbon Treaty came into force in 2009 which limited the European Parliament’s role in trade policy to a yes/no vote for trade treaty approval. However, the European Parliamentary elections are fast approaching and as awareness builds on the agribusiness agenda behind TTIP, particularly in Germany, more and more people will be asking those seeking a European parliamentary seat whether they are willing to say no to TTIP.

The tour generated local media attention in the various locations in Germany (including a TV interview). Here are a few articles: