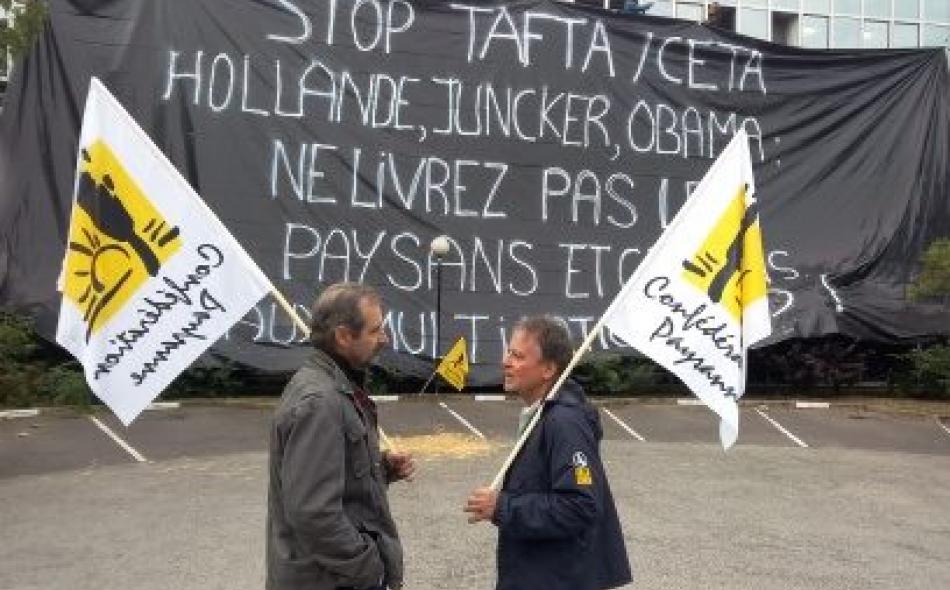 From France, which gave us the Rights of Man, we hear the call for the Rights of Citizens from French farmers who yesterday staged a sit-in at Cargill’s headquarters in Paris protesting proposed new free trade agreements. The second largest farmers’ union in France, Confédération Paysanne, unfurled a banner that read, “Holland, Juncker, Obama: Don’t offer farmers and citizens to multinationals, stop TTIP and CETA.” They occupied the Cargill trading floor all day, until they received an appointment with the Secretary of State for French Foreign Trade, Mr. Matthias Fekl.

The two new trade agreements being negotiated between the European Union and the United States (TTIP) and Canada (CETA) are the latest in a long running battle between citizens and global corporations. With each new treaty, the corporations attempt to changes the rules of economic and social life to give themselves control of the world’s natural resources and how decisions are made for their use. More an more, trade policy is becoming a central influence on everyday life.

IATP met Confédération Paysanne and other French farmers at the WTO protests in Seattle in 1999. They brought with them from their cooperatives in the Larzac region great wheels of Roquefort cheese that sustained many of us throughout several days of tear gas barrages. The Battle for Seattle has become the battle for the rights of citizens against the corporations. The French farmers have called us to the ramparts. The message that greets you when enter the Larzac region says, “Le monde n’est pas une marchandise.” We agree.