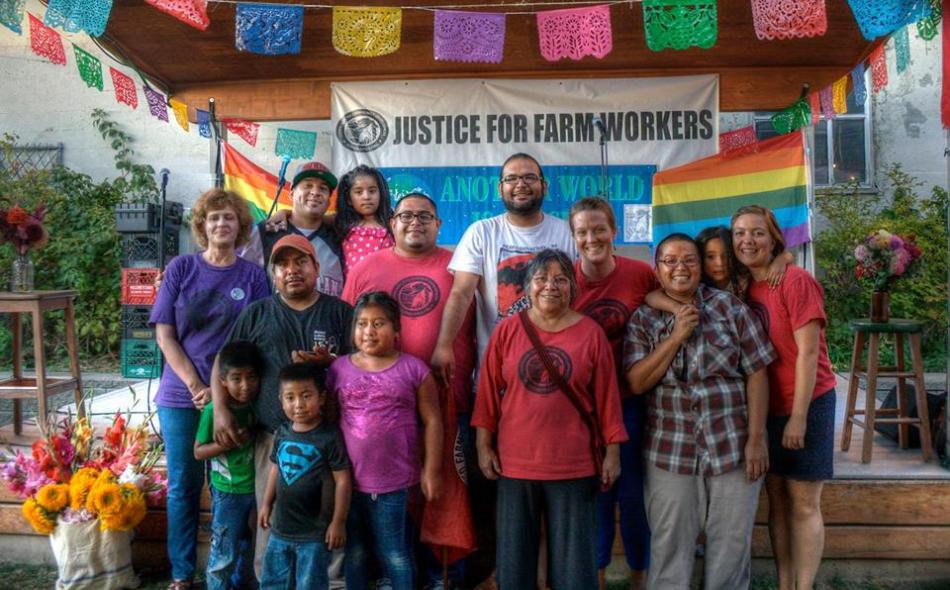 Community to Community Development, one of the co-winners of the 2014 Food Sovereignty Prize.

IATP, as a member of the U.S. Food Sovereignty Alliance, is excited to join our partners and allies in congratulating the Union of Agricultural Work Committees (UAWC) of Palestine and Community to Community/Comunidad a Comunidad, as co-winners of the 2014 Food Sovereignty Prize. Food sovereignty, which demands that the shape of food and agricultural systems must be designed by and responsive to the needs of those who produce, distribute and consume food, rather than by the demands of markets and corporations, is very much part of the values and objectives of IATP. It calls for a democratization and decentralization of food systems—two vital principles that UAWC and C2C are both striving for in their own work.

As the USFSA states in their press release announcing the winners:

Their stories of continuous struggle to defend the rights of their communities – farmers and fishers in the occupied Palestinian territories and migrant Mexican farm workers in Washington State, both seeking to produce their own food, on their own land, in their home communities – stand in stark contrast to the storylines coming from agribusiness: that technological changes to crops can meet human needs and resolve hunger.

Palestine has been under Israeli occupation for decades and this summer faced heightened pressure, including thousands killed and many more injured from bombings, destruction of homes, schools, hospitals, farms, and fishing boats, and hundreds of arrests without due process, and the continued building of settlements on Palestinian farmland. UAWC builds farmers cooperatives and seed banks, and supports women’s leadership, while continuing to seek its members’ human rights to food, land, and water.  “This important prize inspires UAWC to carry on its work in defending Palestinian farmers' rights against the brutal Israeli violations, both through supporting small-scale farmers and fishermen toward their food sovereignty and rights to land and water, and also through coordination with local and international movements for social justice and human rights," said Khaled Hidan, General Director of the Union of Agricultural Work Committees in Palestine.

In Washington State, amid failed immigration policies that criminalize working families, Community to Community Development has supported and worked with immigrant farm workers to develop farm worker-owned cooperatives, organize a successful nutrition education project called Cocinas Sanas, and promote domestic fair trade in regional assemblies and meetings. Most recently, C2C has supported an emerging farm worker union, Familias Unidas por la Justicia, and organized a national boycott of Sakuma Farms, their employer, who withheld pay, provided poor housing, and has since retaliated against the workers. Familias Unidas por la Justicia recently won a settlement for wage theft and had a Superior Court Judge rule uphold their right to organize – but their fight is not over.  “In honoring Community to Community, the USFSA honors indigenous farmworkers in the U.S. Displaced by NAFTA, these peasant farmers from Mexico are practicing a tradition of struggle for justice. Together, C2C and Familias Unidas are promoting food sovereignty in rural Washington State and challenging the corporate agricultural interests that are controlling our food system,” said Rosalinda Guillen, Executive Director of Community to Community Development.

The Food Sovereignty Prize, founded in 2009, “spotlights grassroots activists working for a more democratic food system.” Honorees are groups that have raised public awareness, organized on-the-ground action, and/or developed and implemented programs and policies recognizing the importance of collective action in bringing about social change; who have built global linkages into their work, and prioritized the leadership of women, indigenous peoples, people of color, migrant workers and other food providers marginalized by the global food system.

As opposed to the World Food Prize, which honors individuals and emphasizes increased production through technology, the Food Sovereignty Prize “champions solutions coming from those most impacted by the injustices of the global food system. In honoring those who are taking back their food systems, the Food Sovereignty Prize affirms that nothing short of the true democratization of our food system will enable us to end hunger once and for all.”

The Food Sovereignty Prize ceremony, which I will be attending as a representative of IATP, will take place at the Iowa Historical Building in Des Moines, Iowa on the October 15, 2014. It will be refreshing to join groups focused on the key elements of providing sustainability and food security—scientifically validated factors like women’s rights, social change and social and economic justice—and not just on agricultural production: a factor that, without justice, means little for helping people rather than simply profits.