Time to take action on TTIP!

by
Karen Hansen-Kuhn
by 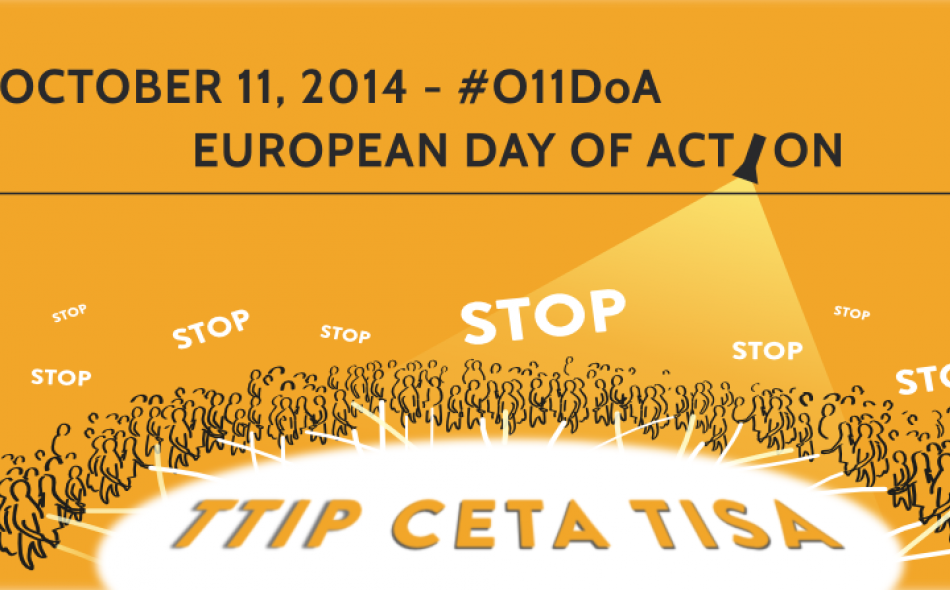 Thousands of farmers, environmentalists and fair trade activists will gather on October 11 in over 300 events across Europe to protest the Transatlantic Trade and Investment Partnership (TTIP) and promote positive alternatives to the current rhetoric of free trade agreements.

Europeans have the right, enshrined in the Treaty of Lisbon, to demand action by the European Commission if they gather at least a million signatures. This spring citizens launched a European Citizens Initiative (ECI) calling on the Commission to repeal the negotiating mandate for TTIP and to abandon the talks for the EU-Canada Comprehensive Economic and Trade Agreement (CETA).  Following the European Commission’s rejection of the ECI on TTIP earlier this month, activists launched a self- organized European Citizens initiative. In less than 3 days over 350.000 European citizens have signed up in their support of the initiative.

Yesterday, the European Council published the negotiating mandate for TTIP. This is an important first step towards transparency that goes further than any action taken so far by the U.S. government, although it’s worth noting that the document had been leaked more than a year ago. The Council’s decision illustrates just how important public pressure is in ensuring a democratic and transparent process, but much more must be done to increase the transparency and accountability of negotiations.

Hundreds of citizens groups in the EU and U.S. are united in their call to publish the negotiating texts and to oppose Investor-State Dispute Settlement (which gives corporations the right to sue governments over public interest laws) and plans for regulatory coherence that could lower health, environmental and food safety standards. Much has been said, about public opposition to chlorine chickens and hormone beef, but what is really at stake is moving towards even more intensive, industrial modes of production that ultimately lead to unhealthy and unsustainable diets and greater corporate control over our food systems. TTIP seeks to harmonize standards (i.e., reduce to their lowest common denominator) in a number of areas such as food safety and labeling, and could undermine much of the progress made to raise the bar on these issues, as well as efforts to rebuild food systems so they work for consumers and farmers, in Europe and the United States.

The debate on TTIP is often framed around a U.S. versus EU agenda, but in fact citizens are getting involved and coordinating strategies across the Atlantic. While European citizens are mobilizing and questioning what benefits TTIP and CETA will bring for society, U.S. groups are gearing up for a week of action on trade in November. Those actions will focus on plans to rush through Fast Track authority during the Lame Duck session between the congressional elections and the entry of the new Congress. Fast track would give the U.S. administration authority to negotiate trade deals in secret and present the final agreement to Congress for an up or down vote—no amendments allowed). On both sides of the Atlantic, people are raising their voices on transparency, democracy and local decision-making.

Here’s what you can do:

Support the European Citizens Initiative against TTIP and CETA

Join actions in your country

U.S. week of action on TPP and Fast Track