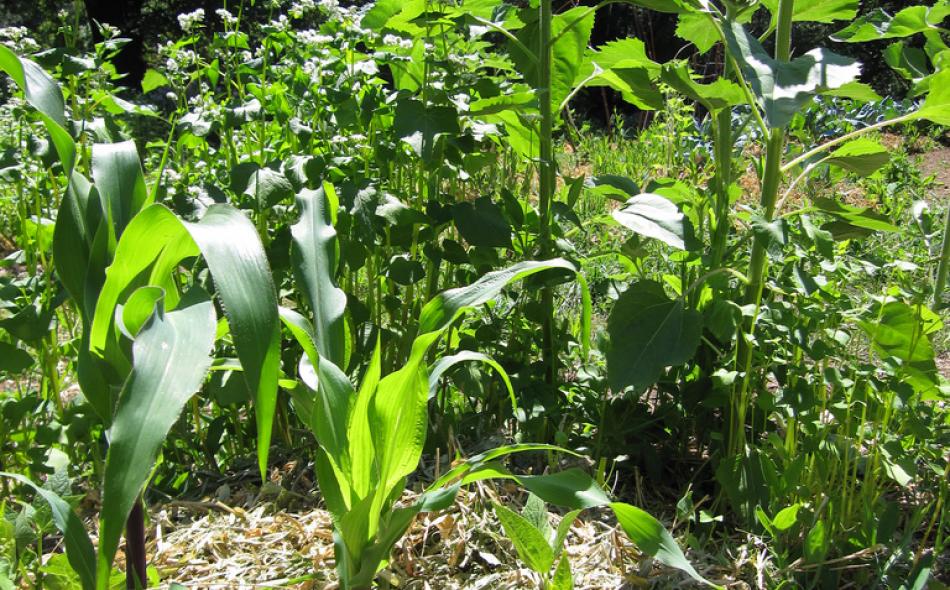 A polyculture of corn, beans, buckwheat, sunflowers and squash.

New research shows that production from organic agriculture shapes up better against input-heavy conventional agriculture than previously thought; meanwhile, evidence for the benefits of agroecology continues to accumulate

A new study was released today examining that evergreen chestnut (to mix metaphors): does “organic agriculture” have lower yields than “conventional agriculture”? Published in the prestigious scientific journal Proceedings of the Royal Society of London by researchers at the University of California, Berkeley, the study found that some previous estimates comparing organic agriculture’s productivity were too low. What’s more, they found that there was a bias in the data in favor of conventional agriculture, which means even their updated estimate may still overestimate in favor of the current resource-intensive, high-input systems that dominate much of agriculture today.

In common with several previous studies, they found certain practices boosted organic agriculture’s performance—specifically, the use of crop rotations and polycultures—cutting differences between organic and conventional systems by about a half, to 3–13%, instead of the overall average that they estimate at 15–23%.[1] This is unsurprising, given that projects using these practices—such as the thirty-year research trials at the Rodale Institute, and phenomenal research at Iowa State--have similarly shown the clear benefits of these practices.[2]

It’s very important here to emphasize one word there: benefits. Plural. Not just one. Practices of organic agriculture (and its big sibling, agroecology) have been shown to often increase biodiversity, decrease erosion, decrease chemical and nutrient run-off (and therefore water pollution), produce less greenhouse gas emissions and sequester more carbon than conventional systems—not to mention to provide more stability in yields and profits and resilience to extreme weather, vitally important factors to farmers as we continue in our trajectory of global climate change.

We can put these elements together with the fact that yield increases in inbred lines and open-pollinated crops—that is, crops that would “breed true” in systems with farmer seed-saving and open-source seed development—have accounted for a large and increasing portion of the yield increases in the dominant hybrid crops developed and grown today (which do not breed true and thus thwart seed-saving, even when patents don’t simply bar farmers from doing so). Further, agroecological practices can provide many benefits to small family farmers—and research shows that small farms are more productive!

More and more, we are seeing solid and consistent evidence that “another world” of sustainable, healthy, just and equitable food systems is not only possible, but many parts of it are already here. We see it in support for agroecology, food sovereignty and food justice that stretches from farmers’ movements to scientists and scholars to scientific societies—growing voices calling for these principles and the growing efforts to implement them. We truly can move away from what I recently called the “biological deserts” that are conventional monocultures, and embrace science, practice, and movement towards a better, more agroecological, world.

[1] The most prominent previous estimate, calculated by Verena Seufert and colleauges, was 21-29%.

[2] I should note that the work at Iowa State is not based on organic agriculture—while they found that “grain yields, mass of harvested products, and profit in the more diverse systems were similar to, or greater than, those in the conventional system,” their diverse system still used “small amounts of synthetic agrichemical inputs”. Meanwhile, the new study discussed here found organic polycultures performed more poorly when compared to “conventional” polycultures. Two quick points to consider here: (1) agroecology, which we advocate here at IATP, includes many different practices, and while it seeks to minimize or eliminate synthetic inputs, as in organic, its practices are more diverse and the elimination of synthetic inputs is a vital goal, not its definition; and (2) as pointed out in Ponisio et al., a vast majority of research funding has gone into breeding crops that respond well to synthetic inputs—so there’s every reason to think that research investment in crops for organic polycultures can seriously reduce any yield gaps. Another way to think about this is the fact that, with careful driving and not speeding, you could increase the fuel efficiency of a Land Cruiser SUV by 10-30%, but this raising your fuel efficiency to 18mpg would not be as effective as finding a car designed to be fuel efficient. But we couldn’t have reached cars that get 50mpg or better if we hadn’t invested in the research to do so.