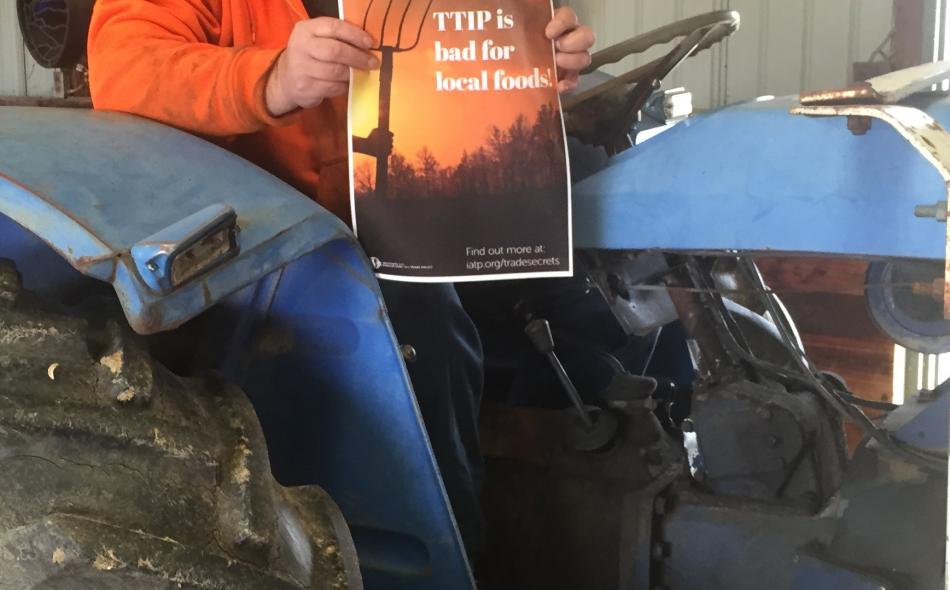 One of the most surprising parts of my visits to Europe around trade issues has been the misconceptions people have about the U.S. And I’m not talking about generalizations about problems in our food system, but the idea that all Americans support free trade agreements. At a recent meeting in Brussels, people from many European countries complained of being branded as anti-American because of the concerns they are raising about TTIP’s impacts on European environment and food systems.

But in fact, campaigns in the U.S. and around the world on TTIP, TPP and other free trade agreements are for the most part not based on nationalism but instead on issues of democracy. Who decides if a community can ban a toxic waste dump, the government or the investor? Under NAFTA’s Investor State Dispute Settlement (ISDS) mechanism, the investor won millions of dollars in compensation over a Mexican community’s refusal to reopen a toxic waste dump. Who decides on Country of Origin Labeling for beef? Under a WTO dispute brought by Mexico and Canada – with a strong push from U.S. industry -- the U.S. is being pressed to abolish this sensible program. Perhaps the most basic problem with NAFTA, CAFTA, TTIP, TPP and other free trade agreements is that they give new powers to corporations to set those kinds of rules. As trade campaigners know, the issue is not whether the U.S. or Europe wins, but which corporations stand to benefit.

We have an important opportunity to make that point on April 18, the Global Day of Action on Free Trade Agreements. Our friends at AbL, a German family farm network that is part of the global La Via Campesina network, contacted us about their plans, a series of signs planted in farmers’ fields on TTIP. People will take pictures of the signs across the country, hold press events, and post photos of their actions across Germany. They asked if U.S. groups might be interested in similar actions to show the breadth of concerns across the Atlantic.

There will be dozens of actions focused on fast track and the TPP taking place across the U.S. (see Citizens Trade Campaign for more information). We’d also like to raise the profile of efforts on TTIP. IATP has produced electronic versions of those posters in English that we hope people across the U.S. might use in similar actions. We have three versions of the sign, using the same image of a field as our German friends, with three slogans (TTIP and GMOs: Stay Off Our Farms!; TTIP is Bad for Local Foods!; and TTIP – another job destroying corporate trade agreement). If you take a picture of yourself, your family or your community event with the sign, we’ll post it to an online map of actions taking place all around the world.

We hope you’ll join us to raise the profile of our common efforts across the Atlantic, and in fact around the world, to challenge corporate-led free trade deals and instead insist that another world is possible.