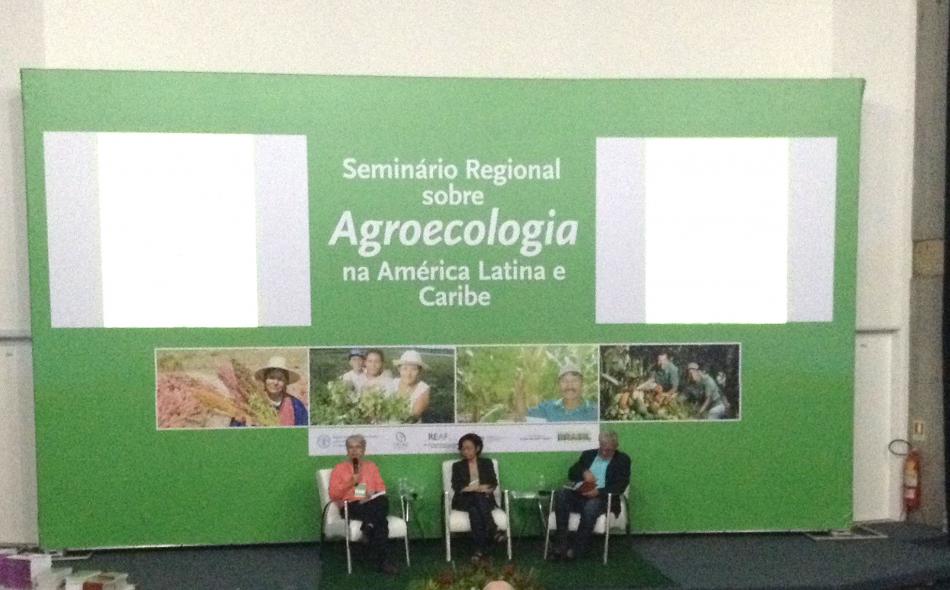 The opening session of the Regional Seminar in Latin America and the Caribbean quickly built to a roar, at the same time raising questions that would have fit in at the last sessions of the day: how do we get to a system that supports food sovereignty and agroecology as the alternative paradigm for food and agriculture from our current system when many governments and corporate interests seek technical fixes that don't actually fix the real problems?

The first session of the day started with comments from several of the key coordinating organizations: the Community of Latin American and Caribbean States (CELAC), the Reunión Especializada sobre Agricultura Familiar en el MERCOSUR (REAF), the Alianza por la Soberanía Alimentaria de los Pueblos de América Latina y el Caribe, FAO Brazil and the Ministry of Agrarian Development of Brazil. The Latin American Scientific Society of Agroecology [SOCLA], who also helped organize these meetings, wasn’t in the first session, but SOCLA’s President, Dr. Clara Nicholls, did present in the second session. The relatively new Minister of Agrarian Development, Patrus Ananias de Souza, who served as the Minister of Social Development under former President Lula and was key to implementing Brazil’s Zero Hunger programs, built to an incredible crescendo, promising that the Dilma Administration was soon to launch a new plan for agrarian reform, one that would secure land for all of the landless people located in camps and settlements throughout Brazil. His passionate pledge brought appreciative applause from the audience of farmers, FAO and government officials, academics and NGO staff members. It was an agreed high note that will be revolutionary if the Brazilian government is able to pull it off. (The details of the plan will not be announced until next month.)

Riding on this wave of hope for revolutionary governmental action, the President of Brazil’s National Food and Nutritional Security Council (CONSEA), Maria Emilia Pacheco, spoke of the vital role of social mobilization in motivating and securing good government policy. CONSEA recently added consumers’ representatives to the council, which she hopes can foster an organized consumers’ movement in Brazil to start matching the high levels of organization seen in other constituencies in Brazil, such as the landless, the family farmer, the food and nutrition security sectors and increasingly, agroecology. We got a tantalizing overview of the philosophy and approach behind Brazil’s national-level food policy council; this institution goes back decades in Brazil, barring an extended interruption during the Cardoso administration of the 90s and early 2000s, and was re-instituted under former President Lula. Indeed, Brazil’s system of food policy councils at many levels, local to national, is built into its federal food security policies, and could serve as a model of some of the elements of participatory food democracy we’ve discussed at IATP recently.

As the day continued, we heard more from social movement members, farmers and scientists about the research, practice and potential of agroecology. Attendees from indigenous and peasant[i] farmer groups discussed practices, organizing and innovation throughout Latin America and the Caribbean—Colombia, Nicaragua, Ecuador, Cuba, Bolivia, Chile, Argentina, Guatemala, and Mexico particularly—making agroecology’s reach, scope and potential abundantly clear from the positive stories shared with the audience.

As we approached the end of the day, several panelists discussed the meaning of the word “innovation” for them, and the importance of social and practical innovation, not just technical innovation. Agroecologist Peter Rosset pointed out the incredible organization represented by the institution of local schools and programs seen in the presentations, and noted that these innovations, set up by the local people themselves, are often overlooked by those from the outside looking to support agroecology. There is often a focus on new institutions, networks and ideas, sometimes imposed from the outside, that doesn’t acknowledge or build on the political agency built by communities themselves. He pointed out that government and officials’ responses to agroecological research sometimes go so far as to question the underlying validity of agroecology by denying the existence of demonstrable innovations from farmers. They overlook the fact that farmer-to-farmer networks, rural schools, movement building and new ways of relating and organizing with each other are all important innovations. Dr. Rosset admonished that we must not overlook policy and social innovations in favor of some machine or technique.

Agroecology cannot be confined to such a narrow definition. Indeed, scaling up agroecology will be about supporting cooperation and learning how to work together as much as it will be about how to work the land. Which perhaps gets to the crux of agroecology’s dilemma: like Minister Patrus Ananias de Souza’s  vision of a comprehensive new wave of agrarian reform, the question for many of us is not the desirability of the objective, but rather the social and political innovations and struggles it will take to get there. The Minister’s plan, and the kind of recognition for farmers and their social innovations that Dr. Rosset called for, means changing power relationships. Reforming land ownership means tackling the vast inequality in Brazil, but those who currently have more power and resources often don’t like to see it rivaled by the empowerment of those who have less. For example, as Dr. Rob Wallace pointed out in a recent presentation at IATP, large agribusiness long ago figured out that raising animals themselves was a risky, hard endeavor—one that lost money with the margins they wanted for their “raw materials”—and agribusiness is obviously afraid of their contract farmers even getting the basic power to exercise their constitutional rights.

Agroecology without justice, without empowerment, without changing power relationships, is not agroecology. But empowering female farmers, indigenous peoples and peasant farmers means an end to being able to push them into bad deals where they take the risk and agribusiness takes the rewards. Fulfilling this vision would be better for farmers, for consumers, for the environment—for pretty much everyone but large multi-national corporations. This is the implication of agroecology that many interested parties throughout the world want to paint as “unscientific” or even unnecessary. The question is, with clear evidence coming from both science and the lived experiences of producers on these necessities, will the regional seminars be able to step up to this challenging realization? Or is the possibility of rebalancing societal power going to be too much to ask of this first opening of a window at the “Cathedral of the Green Revolution”?[ii]

[i] “Peasant” (campesino in Spanish) at its root means “person of the land”, and it is this image of hard-working agricultural stewards of the land that many movements of Latin America seek to evoke with the word campesino/peasant. It does not necessarily have the same kind of distinctly negative connotation that it carries in English.

[ii] Based on comments made by FAO Director-General at the closing of the first International Meeting on Agroecology last year in Rome.