Agriculture and supply management in the TPP 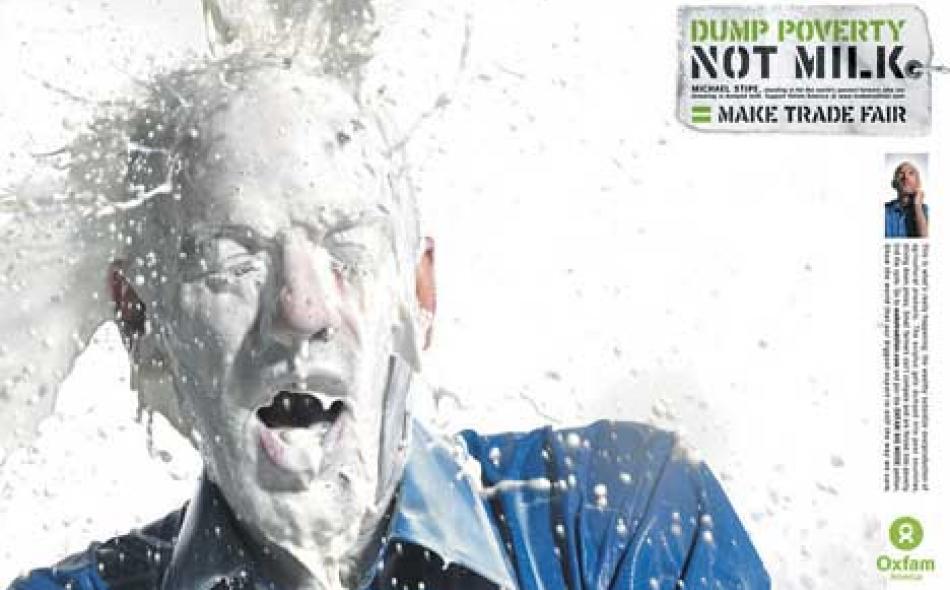 Analyzing agriculture in trade negotiations as they occur is a little like playing blind man’s bluff. However, in a negotiations “game” with myriad consequences for the domestic regulations that protect public and environmental health and worker safety, among other public interests, the public is blind-folded throughout the negotiations.  The other players are industry lobby groups and governments jockeying to achieve commercial advantage, often by removing regulatory “irritants” to trade through their privileged access to the negotiations process.

And the U.S. mainstream media are happy to play along with the game, as long as they get an occasional sneak peek at negotiations texts that the Obama administration denies to the public. For example, of the latest Transpacific Partnership (TPP) negotiating sessions, the New York Times writes, “A copy of the still incomplete intellectual property chapter, viewed by the New York Times, shows just how isolated the United States’ position is."

A  Times editorial in June noted complacently, “[b]ecause trade agreements are understandably secret while they are being negotiated, it is hard to determine who is right,” the TPP proponents or critics. This editorial support for the Obama administration policy of denying public access to draft negotiations texts allows the Times to both have privileged access to the negotiations text and yet not be obliged to determine which claims about the TPP are right.

Recent leaks of the TPP intellectual property chapter uncover perhaps the most contentious chapter for the non-U.S. TPP negotiator–patent enforced pricing that blocks access to essential medicines. However, completion of the TPP negotiations is also blocked by serious disputes over agricultural market access opportunity offers. Some of the traditional forces of opposition to the demands of agribusiness exporters, such as the Japanese farmer cooperatives, reportedly have lost political and economic influence to defend their rice and beef markets. At this point, the agriculture market access fight is focusing on U.S. sugar and Canadian dairy import quotas. Import quotas are crucial features of U.S. de facto and Canadian de jure supply management.

The U.S. quotas for sugar imports perform a supply management function without the mandatory production restrictions that would be part of a statutory supply management program. The American Sugar Alliance, which represents farmers, explains on their website that “unneeded sugar from a TPP agreement could swamp the domestic market and trigger a taxpayer cost to U.S. sugar policy, which is projected to run at no cost over the life of the 2014 Farm Bill.” The National Confectioners’ Association (candy companies and other sweetener users) is lobbying hard to have the TPP remove U.S. sugar import quotas, which will trigger Farm Bill payments to sugar cane and sugar beet farmers, as the price of sugar collapses.

The USTR defense of the de facto sugar supply management program does not preclude it from attacking Canada’s dairy supply management program. Canadian import barriers are one part of a supply management program that has kept Canadian dairy prices, high, stable and above the cost of production.  The National Farmers Union of Canada testified to its Senate in June that grain and cattle farmers and ranchers without supply management had suffered under Canadian trade agreements. Included in that testimony, however, were more positive comments: “ Canada’s supply management system is a success story for farmers, consumers, processors and governments. Canadian dairy producers obtain their income from the marketplace, not from government subsidies as occurs in most other countries. Canadian consumers have a reliable supply of wholesome milk, chicken, eggs and turkey. Processors have the predictability that allows them to operate at near full-capacity and avoid the cost of idled plant space that is common in other jurisdictions.”The debate over supply management is likely to figure prominently in the that Prime Minister Stephen Harper has called for in October.

In July, on the eve of what had been billed as the concluding round of the TPP, the Democratic and Republican heads of the U.S. Senate Finance Committee wrote to the U.S. Ambassador to Canada with an ultimatum: "In fact, our support for a final TPP agreement that includes Canada is contingent on Canada's ability to meet the TPP's high standards" (“Hatch, Wyden Pressure Canada for ‘Significant’ Ag Market Access in TPP,” Inside U.S. Trade, July 24, 2015).

The U.S. Dairy Export Council, the National Milk Producers Federation and the International Dairy Foods Association have sent a joint letter with New Zealand and Australian dairy export associations to their trade officials demanding an “ambitious” TPP. The result of the ambition would be to import cheap MPC and export more expensive “cheese” and other dairy products to TPP members.

Ben Burkett, a Mississippi farmer and president of the U.S. National Family Farm Coalition (NFFC) summarized the threat that MPC imports represent to U.S. dairy farmers: “With just under 50,000 dairy farmers left in the U.S., they deserve to have sensible policies enacted on a domestic level, not to be crushed by unfair trade deals that threaten their ability to recover their costs of production. It makes no sense for our nation's dairy farmers to compete against dairy farmers in New Zealand and Australia, the lowest-cost producers in the world,” said Burkett. “We are also anxious about the expanded imports of milk substitutes, such as Milk Protein Concentrate, which could be substituted in many products without being labeled clearly for customers.” The NFFC lobbied for a dairy supply management program in the 2014 Farm Bill.

Some costs of export agriculture without supply management

The lack of U.S. dairy supply management results in chaotic dairy production and plunging prices. According to the U.S. Department of Agriculture, in 2015, dairies in Michigan and the Northeastern U.S. dumped 30 million gallons of milk into waste disposal systems, because they didn’t have the capacity to process the milk.  A 30 percent fall in liquid milk prices in 2015 has been offset partly by lower cattle feed costs. But an anticipated further drop in milk prices next year, due in part to imports, will return U.S. dairy farmers to a too familiar situation—selling milk to U.S. dairy processors at below the cost of production.

The United States dismantled the last vestiges of its supply management programs, with the notable exception of the sugar program, in the 1996 Farm Bill. Not surprisingly, prices for dairy and other commodities collapsed well below the cost of production , triggering billions of dollars in taxpayer subsidies to save export driven agriculture from another market failure. Currently, farmers in Minnesota planting GM corn are projected to lose an average of $244 per acre, due to low prices on the futures markets and record high costs of production. It is not unusual for a Minnesota corn and soybean farm to be 1,000 acres or larger, meaning a $250,000 per farm operator loss in 2015.

In the absence of programs to sensibly manage supply, U.S. taxpayer funded revenue insurance and other forms of what the World Trade Organization calls Aggregate Measures of Support (AMS) will rise to about $12.4 billion in 2015, partially offsetting a projected U.S. farmer income loss in row crop and livestock sales of about $25.8 billion. The United States has demanded that AMS payment definitions and levels not be negotiated in the Doha Round (D. Ravi Kanth, “Azevedo pursuing his controversial ideas to help the U.S., other ICs [Industrialized Countries],” South North Development Monitor (SUNS email edition), #8074, August 3, 2015. Subscription required). AMS payments are not discussed in the TPP.

Whether or not the U.S. AMS payments, calculated with reference to out of date 1986-88 prices, comply with its WTO commitments, U.S. agribusiness will be exporting grains and oilseeds, and meat and dairy products fed with those grains and oilseeds, at below the cost of production, transportation and insurance. In other words, U.S. agribusiness will resume the export dumping that IATP documented for row crops from 1996 to 2005. The United States is zealous in pursuing anti-dumping cases in other industrial sectors, e.g. China’s solar energy industry. But dump corn or soy into Japan, Malaysia, Peru, Mexico or other prospective TPP members? No problem with the WTO or if the TPP is concluded.

In light of the success of the sole U.S. supply management program for sugar in preventing taxpayer subsidies, why do the Senators wish to export U.S. dairy products at prices that will again trigger more taxpayer-funded subsidies to farmers deprived of supply management by law? Why do the Senators wish to allow a flood of MPC imports from New Zealand’s dairy monopoly, Fonterra, further depressing liquid milk prices? A simple answer is that dismantling Canadian dairy supply management benefits the U.S. dairy processing industry that is advocating for the end to Canadian dairy import quotas as the pre-condition for its support of TPP. Furthermore, the demands of the sugar processing industry to dismantle the sugar program are threatening to win in the TPP what the processing lobby could not win in the Farm Bill.

The more complicated answer concerns two U.S. tacit trade objectives: 1) to continue to export agricultural commodities at below the cost of production (export dumping) while degrading the capacity of other TPP members to do so; 2) to eliminate state intervention in agriculture and other industrial sectors while maintaining massive taxpayer subsidies, direct and indirect to U.S. headquartered transnational corporations.

The broader issue of what subsidies are for, as well as the role of State Owned Enterprises (such as agricultural marketing boards that use supply management), deserves a fuller debate. But in the TPP, the subordination of all agricultural policy to increasing market access is very unlikely to produce trade-offs that will benefit farmers, ranchers or rural communities.