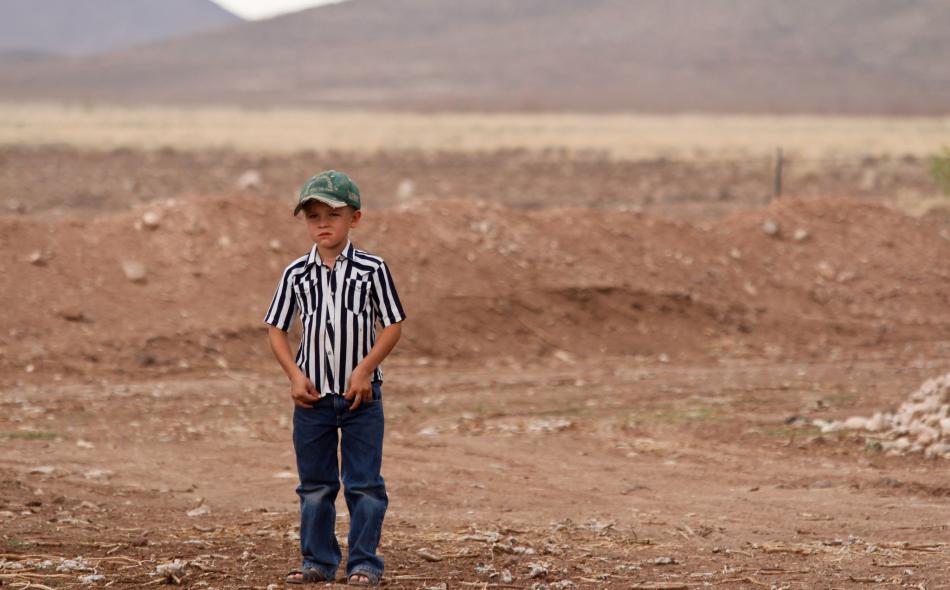 News coming out of the northern Mexican state of Chihuahua is most often about narco-traffickers but, in recent weeks, attention has shifted to farmers protesting increased cost of production and shutting down the importation lane at the El Paso and Ciudad Juarez crossing. And a little further south, severe drought is driving Mennonite farmers off the land. A closer look at the history of Mennonite migration reveals a pattern connected to drought and dry land farming for the last 150 years.

Near the tiny village of Santa Rita, 50 miles from Ciudad Juarez, Mennonite farmers are packing up their belongings and heading for Argentina. Mennonites have a history of migration brought on by persecution for their uncompromising pacifist religious beliefs, but this latest relocation is the result of a drought that has ravaged the region since 2012.

With predictions that water will run out in the next 20 years from overuse, all kinds of farmers will be moving out of Chihuahua and looking for land and water to grow the corn, beans, pecans, apples, dairy and other agricultural products that have been the mainstay of this arid part of northern Mexico.

Mennonites were originally a Dutch Anabaptist religious community, established in the Netherlands in the 1500s.  They moved east across Europe to escape religious harassment into the lush Vistula Delta of Prussia and then south into Russia, the Ukraine and the Crimea and eventually as far as Siberia and Turkestan before reversing course and going west to America.

A major Mennonite migration to the U.S. from Russia took place in the 1870s, in the midst of a worldwide period of intense drought, parallel to what is happening in Chihuahua today.

Over the decades, the Mennonites perfected dry land farming practices that helped turn Russia from a grain importing country into a grain exporter. But the exemption from military service provided by Czars as far back as Catherine the Great began to weaken and restrictive laws governing land ownership in Russia prevented Mennonites in the Ukraine from establishing new farms. The lack of access to land sent some Mennonites further east to Siberia and south to Turkey.

All these events were taking place in the midst of an El Niño driven drought and famine that, by some estimates, killed 60 million people world-wide between the 1870 and 1890.

Fortunately for the Russian Mennonites, the opening of the American west, along with the arrival of trains, led to a reversal of their easterly migration and a jump across the Atlantic to the Great Plains states. They brought with them their knowledge of dryland farming and grain production. And this was not just any grain but Turkey Red, or, as we call it today, hard red winter wheat. Their arrival and introduction of more resilient crops and practices came at a crucial moment.  The world-wide drought conditions hit the American west just as the Mennonites were getting off the train. In addition to no rains, the droughts unleashed hordes of grasshoppers in search of any and all plant life in a broad swath of land from Minnesota to Texas.

The combination of drought and locusts transformed the landscape to leafless trees and barren fields. Corn, the leading grain crop across Kansas and Nebraska, was wiped out in many places, creating demand for Turkey Red wheat that was planted in the fall and harvested in the early summer. By 1910, wheat had replaced corn as the leading crop in Kansas and remains so today.

The conversion of the great western prairies from grassland and grazing to farmland growing wheat was a massive ecological, economic and social development that contributed to the U.S. becoming a major world power. The expanded wheat harvest from the Great Plains came in time to meet the increased demands for grain brought on by World War I. The price collapse that followed the war led to the rise of the populist movement, and its insistence on fair prices for farmers set the stage for New Deal farm programs that followed.

The next period of drought in the Great Plains created the Dust Bowl of the 1920s and 30s. Thousands of farm families fled the devastation brought on by economic collapse and drought. By 1940, 2.5 million people had moved out of the Great Plains states.

At the same time, starting in the 1920s, thousands of Mennonite farmers who had settled in Canada as part of the 1870 migration out of Russia and Turkey, started moving to Mexico over disagreements with the Canadian government. The new colonies used their knowledge of dryland farming to build successful farms that have become known for a local cheese. Today there are 60,000 Mennonites in Chihuahua, where they have turned to drilling deep wells for irrigation, causing problems with neighbors and local authorities.

For Mennonites it is an old story that combines religious beliefs, farming practices and weather; all three seem to conspire to keep them wandering in search of a place to farm. But all farming practices that produce more and more without regard for the costs, including the cost of water, will only shorten the cycle between growing abundant crops and farmers going out of business.

For more on drought and the drivers of climate change, visit IATP’s www.iatp.org/storyofdrought.