Toward Rio+20: Will it create more than words? 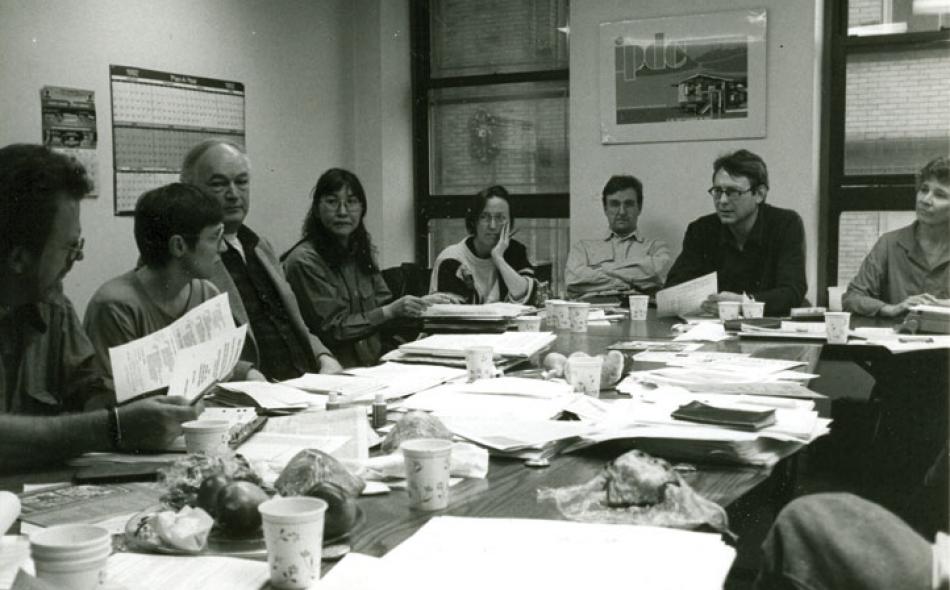 IATP board members prepare for the first Earth Summit in 1992. 20 years later, Rio+20 is still addressing many of the same issues—hopefully with a more meaningful outcome this time around.

Earlier this month, not far from the site of Occupy Wall Street at Liberty Plaza in New York, a small group of people gathered; they too were engaged in a conversation about systemic change in the face of some of the challenges faced by the world today, specifically global food and water insecurity, financial crisis and climate change. IATP was invited to be a part of the “Global Transition 2012, New York Dialogue,” an effort to provide input to Rio+20 (read "Rio plus 20), an international conference scheduled to take place in Brazil next summer. Co-organized by Stakeholder Forum, New Economic Institute and New Economic Foundation, the ‘Global Transition 2012’ Initiative will use the results of this dialogue as input for its policy proposals and advocacy in the lead up to Rio+20, so that these recommendations are included in the negotiating text and final outcome document.

The Rio conference will mark the twentieth anniversary of the first Earth Summit, where heads of states came together to address what was seen as the priority issue at the time: environmental limits to development. They sought to develop a global framework to chart a path for “development that meets the needs of the present without compromising the ability of future generations to meet their own needs.” (IATP participated in the first Earth Summit with a focus on environment and trade.) Sustainable Development became the buzzword in development efforts in the following decade, with the three pillars: economic, social and environmental development.

By its 10th anniversary, however, it was abundantly clear that we were not on a path to sustainability, and growth was achieved at tremendous costs to environment, equity and justice. According to the U.N.’s annual human development reports, inequality has increased since the 1990s, when the U.N. began monitoring it. By 2010, it is reported, that "the richest 1 percent control 43 percent of the world’s assets; the wealthiest 10 percent have 83 percent. The bottom 50 percent has only 2 percent."

The environment has fared no better: "Global emissions of carbon dioxide CO2—the main cause of global warming—increased by 45 percent between 1990 and 2010, and reached an all-time high of 33 billion tonnes in 2010." This is further affecting food security for billions, and thus raising concerns over equity. The water crisis, too, is no longer a looming threat in the horizon; it is here, affecting billions of people to various extents.

As the date for making submissions to feed into the zero draft of the outcome document comes closer (November 1, 2011) civil society organizations have been ramping up their efforts toward Rio+20.

The dialogue in New York was one such attempt to look at these interrelated issues afresh. Six challenges that the organizers of the dialogue identified as necessary global leaders to address in order to create systemic change are:

I participated in the discussions around food security, biodiversity and natural capital, all key issues for IATP.

It is often presumed that feeding the growing population calls for the expansion of chemical intensive agriculture, despite its negative impact on environmental and ecological integrity. Some of us working on these issues shared our position that intensification of agricultural production is possible without harming the environment, provided we revamp current policies that are tilted in favor of industrial agriculture. Of course this would require reorganizing agricultural policy to make changes, such as policy support to increase viability of small farms, agro-ecological initiatives and decentralized food systems around the world.

This would also require that the currently prevalent agronomic practices are modified through selective adoption of both traditional knowledge and modern agricultural knowledge. The System of Rice Intensification (SRI) as practiced by members of the Tamil Nadu Women’s collective is a very good example of such production intensification that simultaneously improves agricultural output and economic returns from agriculture while helping to conserve water and enhance biodiversity. Another similar example from East Asia is that of Cambodian farmers who have adopted SRI over the last decade.

Many participants in the dialogue see the answer to these challenges, and systemic change, coming through the development of a green economy and green growth. According to Green Economy Coalition (network of 25 organizations, which includes WWF, IUCN, IIED and WBSD among others) a green economy (to list a few) is:

Many of these goals were articulated almost 25 years ago by the World Commission on Environment and Development in 1987. This time around, hopefully these will not remain words alone, but will be reflected in deeds as well.

But as we know, the devil is in the detail. Civil society will have to play an active role to ensure that not only the ends, but also the means we adopt, and the paths we take in order to contribute to equitable economic development, are socially just, and are such that they uphold precautionary principles toward the protection of biodiversity and environmental sustainability.

Rio+20 has the potential to define coherent agricultural policies around healthy food systems and resilient rural livelihoods. The time is right to work toward a meaningful outcome this time around.