What is a New Market Mechanism? 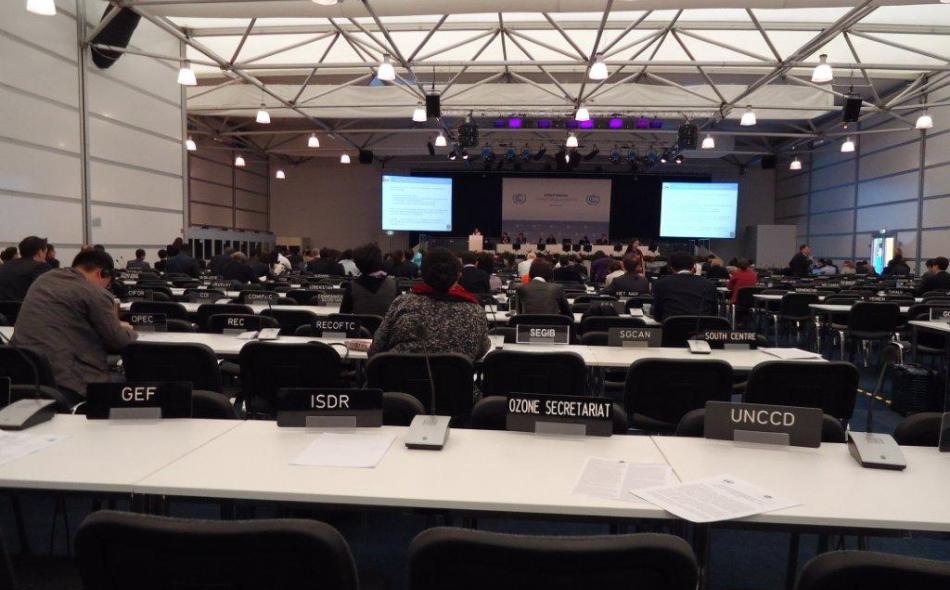 The UNFCCC negotiations have thus far been a pretty quiet affair. There are just over 3,000 government delegates, intergovernmental officials and accredited NGO observers going about their jobs, with just a handful of journalists to report the results. It is very unlikely that there will be any of the front-page drama of negotiators photographed huddling over the meaning of a phrase to come to an agreement to “save” the negotiations, as happened in Durban, South Africa, 36 hours after many developing country negotiators had gone home. Protest actions are few, small and polite, with none of the beatings of climate negotiations protestors that occurred in Durban and at previous Conference(s) of the Parties (CoP) to the UNFCCC. For example, today the Youth Nongovernmental Organizations staged a “marriage” between climate finance and climate science, complete with costumes and a blessing.

So instead of street fighting, there is a lot of infighting, some of it subtle and some not so subtle. On May 19, IATP went to two UNFCCC workshops called for by the Durban CoP.  The workshops featured about two dozen presentations that are thematized here. The first had the title “Workshop on a framework for various approaches,” for financing projects to reduce greenhouse gases (GHGs) and to adapt to climate change. The diplomatically cumbersome title notwithstanding, much of the workshop was about whether the trading of carbon emissions credits would result in any net reduction in GHGs to prevent a catastrophic global warming.

The second, “Workshop on the new market-based mechanism” (NMM), debated the elements of the NMM that had been ostensibly “defined” in Durban. In Bonn, some negotiators argued that “defined” meant “established” while others said that the purpose of the NMM debates was to come to agreement on what elements would be included in the NMM definition. Such fundamental disagreements are to be expected from a Durban decision that was presented under the “personal authority” of the Chair of the Durban CoP and not as a result of an agreement by the CoP delegates.

The Parties’ submissions for “various approaches” and for the NMM formed the basis for most of their workshop presentations. Likewise observer submissions informed their workshop presentations. IATP submitted three papers for the Bonn negotiations, including one on the NMM and another on “various approaches.” My first impression of the workshops is to wonder whether non-native English speakers could comprehend the content.  Each presenter had just seven minutes, and so spoke at a very fast clip. Text-heavy Power Point presentations aided comprehension if you could see them. Our photo of the large room in which the workshops were held does not convey the lack of interpreters’ booths. Cuts to the U.N.’s overall budget have limited the services of interpreters to the plenary sessions only. Indeed, the UNFCCC budget is so constrained that it may not be able to hold negotiations planned for Bangkok in late August or early September.

In both workshops, carbon market proponents acknowledged that there was “suppressed demand” for their product, i.e., that carbon emissions credit prices had crashed, as there were few buyers for the credits. Demand would be revived, we were assured by several speakers, once there were ambitious and legally binding commitments to reduce GHGs that would provide “regulatory certainty” for the carbon market investors. Many major GHG-emitting parties have “committed” only to the voluntary “pledge and review” system of emissions cuts in the 2009 Copenhagen Accord. “Pledge and review” ambition is widely considered to be insufficient to prevent a degree of global warming that would be catastrophic for small island states, Africa and many developing countries vulnerable to climate change. Furthermore, carbon prices would increase once the European Commission redesigned the Emissions Trading Scheme (ETS) to reduce the number of allowance credits, perhaps by a third, which the Commission gives for free to installations that are subject to EU emissions cuts. The allowance credits are one of the “market mechanisms” that are to make GGH reductions more “cost effective” for corporations.

In the “various approaches” workshop, a chasm reopened between those parties who want the design of market mechanisms to be subject to UNFCCC approval according to UNFCCC principles and those who prefer a decentralized approach, according to which the CoP would merely “recognize” the validity of all parties’ market mechanisms as fulfilling UNFCCC goals. Japan’s presentation represented the decentralized viewpoint while the Alliance of Small Island States (AOSIS) called for a centralized approach to ensure that global warming remained at below 1.5 Centigrade required for the survival of its members. A decentralized market would allow Japan to claim emissions reductions from shuttered nuclear power plants. Australia framed a question for AOSIS that signaled doubt that the UNFCCC would have the finances and technical capacity to administer and enforce a centralized data bank of party emissions reductions and market mechanism data. More than one speaker thought that the CoP would agree to standards that would link national and regional carbon markets into a credible system, once parties agreed to emissions caps stringent enough to create demand for the emissions credits.

Of the parties presenting, only Bolivia spoke out against carbon markets and market mechanisms in general. It called instead for a Climate Justice Mechanism that would be publicly financed by developed countries to fulfill the UNFCCC principle of developed country historical responsibility for having emitted the vast majority of GHGs. Several members of the International Emissions Trading Association (IETA), sitting next to IATP, snickered at this presentation, presumably because they were certain that major emitters, such as the United States, would never recognize their historical responsibility, much less pay for the CJM.

Oscar Reyes, of the Institute for Policy Studies, reminded the Parties that the UNFCCC’s Clean Development Mechanism (CDM) has suffered from a number of failings that would not be remedied by an increase in demand for CDM carbon credits. While the CDM was supposed to promote sustainable development, the lack of a UNFCCC definition of “sustainable development” and the lack of consultation by CDM project developers with the CDM project affected communities has effectively taken “development” out of the mechanism. Furthermore, Reyes said that the CDM emissions offset credits should be phased out, since offsets have not resulted in net emissions reductions, the stated goal of all the Parties. Because  Parties and carbon traders, such as those in IETA, all said that the carbon accounting “infrastructure” of the CDM and the value of existing CDM credits must be retained in the design of the NMM, nobody was snickering at these and other CDM shortcomings.

The New Market Mechanism is supposed to supercede project based emissions reduction market mechanisms, by counting economic, sector-wide (e.g., the cement industry) emissions reductions. The European Union, together with the Organization for Economic Cooperation, gave the most elaborate presentations on how the NMM would be built. Japan’s workshop submission was skeptical that it would be feasible to set scientifically accurate, sector-wide emissions baselines, from which emissions reductions would be measured. China said that the NMM should be project based only, and that only developed country parties that had made legally binding emissions reductions commitments would be allowed access to the NMM. In essence, the NMM for China would be a better managed and larger CDM for China’s CDM projects, the most of any party.

In the midst of these very great differences about what elements should be allowed in the NMM, IETA said that its investors needed “regulatory certainty” about what would be allowed, and the sooner the better. Furthermore, all emissions credits under the NMM, had to be “totally fungible,” i.e., accepted for trading in the markets of all parties and in any configuration of carbon credit derivatives. Its investors would not increase their trading of carbon credits unless parties agreed to provide “regulatory certainty” and “total fungibility.”

Ecuador’s presentation gave the most hope that something under the NMM would result in net emissions reductions. Ecuador proposed a Net Emissions Avoidance Mechanism (NEAM) that would allow parties of developing countries to be paid not to exploit their fossil fuel resources. For example, one Ecuadoran oil reserve was estimated to be worth about $10 billion USD and would add millions of tons of GHGs to the atmosphere. The NEAM would have an independent body establish a baseline from which emissions avoided would be estimated. In exchange for a NMM Trust Fund payment of $3.6 billion, in the case of Ecuador, parties would sign a warrant not to sell their fossil fuel deposits. They would forfeit all or part of the payment, if a subsequent government reneged on the warrant. The funds received would have to be invested in projects that the CoP would define as those of “sustainable development.” The “sustainable development” definition would include community and civil society participation in the selection, design and implementation of the projects. Parties had a number of questions about this proposal, which appears to mean that they aren’t dismissing it out of hand.