Crisis or opportunity in the multilateral trade system? 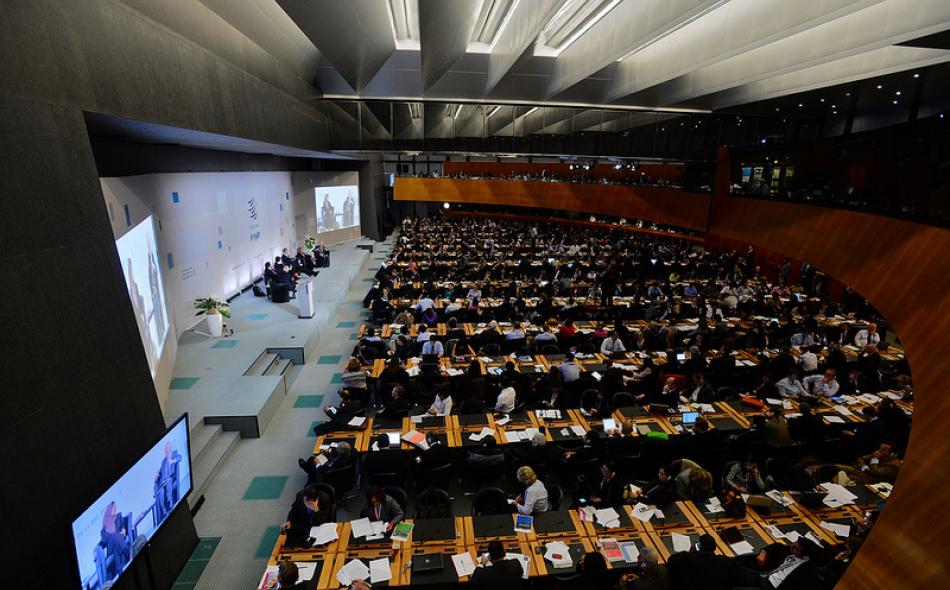 October 10, 2012 – It was fascinating to attend the WTO public symposium at the end of September, an event framed around the question: “Is Multilateralism in Crisis?” The question invited far more yesses than noes, although there was a healthy sprinkling of determined optimists in the crowd as well. Yet the optimists did not talk much about trade. They focused on aviation agreements and the complex yet successful workings of the Intergovernmental Panel on Climate Change (IPCC)—the scientists who prepare climate reports, that is, not the hopelessly entangled inter-governmental negotiating process, which meets under the auspices of the U.N. Framework Convention on Climate Change (UNFCCC).

The crowd at the symposium was smaller than in days past, and government delegates and private sector representatives seemed less in evidence. NGOs were decidedly few—the WTO is just not the hot issue it was even five years ago. Probably the biggest network of social movements and NGOs to have dogged multilateral trade since the days of the Seattle Ministerial—known as "Our World is Not for Sale"—was represented by just a few organizations, many of them in Geneva for meetings on investment with the U.N. Conference on Trade and Development (UNCTAD), though also overlapping with the WTO symposium.

Where do the politics of the negotiations stand now? It appears that the paralysis in multilateral trade talks is leading to yet another North-South (industrialized versus developing country) divide. In its latest iteration, this takes the form of the North (or much of it—Europe is rather quieter than the U.S., Canada and Australia) pushing a truncated agenda focused on services, trade facilitation and investment. Anyone remember the Singapore issues from 1996? With the exception of services, which were included in the Uruguay round and Doha, this sounds very much like that agenda while others, mostly from the South, insist the Doha Agenda must be finished first, before any new issues can be considered.

It’s hard to see the South’s stance as anything but defensive—a way to hold off the pressure from developed countries to move on issues that are arguably even more complicated, and politically sensitive, than agriculture and industrial goods.

Where does this stalemate leave those of us who were against the Doha Agenda from the very beginning, back when then-WTO Director General Mike Moore talked about a Millennium Round? We are hardly going to rally around a strategy of insisting the Doha Agenda precede—meaning an extension of the liberalization of trade in agriculture, services and industrial goods—the work to get better rules for the multilateral trade system can advance. We never wanted Doha, and are not going to accept it now just because it may be preferable to the alternative offered by the U.S. Trade Representative. The Doha Agenda is not an alternative to the Singapore issues; it’s the cut of the same cloth. In 1999, IATP and other organizations argued the existing “built-in” agenda should be the focus of trade negotiations, coupled with greater attention to neglected issues, including workers’ rights and environmental protection. These issues are still important, and neither completing the flawed Doha Agenda nor delving into the Singapore issues will get us closer to addressing them.

The symposium was in part focused on discussions about global value chains. Speakers noted the world of trade is changing, with goods that are made in more than one country replacing traditional models of production and export. This issue takes a distinctive shape in agriculture. There has been enormous growth in so called non-traditional agricultural exports (such as shrimp and fish, fresh fruit and vegetables, and cut flowers), and this trade has involved new companies along the supply chain, including supermarkets but also new trading firms, together with the historically dominant commodity traders, such as Bunge and Cargill.

As governments’ direct involvement in agriculture changes, and in many countries diminishes, agricultural trade rules need rethinking. Just as international human, animal and plant safety standards have to a large extent been overtaken by wholly private standards such as Global GAP, so other aspects of food and agriculture trade have evolved beyond a discussion of export subsidies, domestic support and tariffs. The food price crisis shattered confidence in international agricultural commodity markets as a reliable source of food. The WTO has to do its part to rebuild that confidence, acknowledging the concerns of net-food importers to protect (and in many countries expand) domestic production, and oblige exporters to accept more disciplines in return for their role as suppliers to international markets.

What about agriculture specifically? Australia is taking some steps to build trust and brainstorm on new approaches within the agriculture discussions by holding informal conversations on food security. It’s a good idea, but governments are reportedly very wary and very little tangible ideas have emerged from the meetings as yet. Here’s another question: Why doesn’t the Committee on Agriculture repeat the analysis and information exchange process that was built into the Uruguay Round mandate as a preparation for the 5-year implementation review? The process ran from 1998 to 2000, allowing an exchange on how the Agreement on Agriculture worked in practice, and what problems it left unsolved. Fifteen years on, there would surely be value in a similar stocktaking exercise, this time with other ministries and civil society involved, to rebuild an understanding of where common ground lies. Trade is too isolated from other policy areas, and that has left it vulnerable in the crisis. If multilateral trade negotiations are to emerge from crisis, they are going to need outside help.

For their part, trade negotiators are mostly focused on regional agreements, such as the Trans Pacific Partnership (TPP). The TPP agenda is one of increasing protection for patent holders and private investors at the expense of public access to knowledge and public policy priorities, such as environmental protection and workers’ rights. It is negotiated in secret, among just a few countries, with any countries wishing to join at a later stage obliged to accept wholesale any agreement already reached. The process is an archetype of how not to negotiate trade in the public interest.

We still need a multilateral framework for trade. The multilateral system gives the most countries the best chance to have a voice in the economic structures that affect them. If there is a crisis in the multilateral system (and it’s hard to argue otherwise) then governments need to take responsibility for the crisis and act to get us out of the mess. The public symposium was full of interesting ideas and debate, but there was very little sense of “can-do” and rather too much hand wringing to inspire confidence. Maybe a new Director General will help (Pascal Lamy’s term is coming to an end), but it is not just about leadership—it’s about whether people believe the trade system is needed. Arguably, the traditional powerhouses such as the United States don’t see the need for multilateral rule. Let’s hope that changes sooner than later.