The makings of an antibiotic-free farmer-evangelist 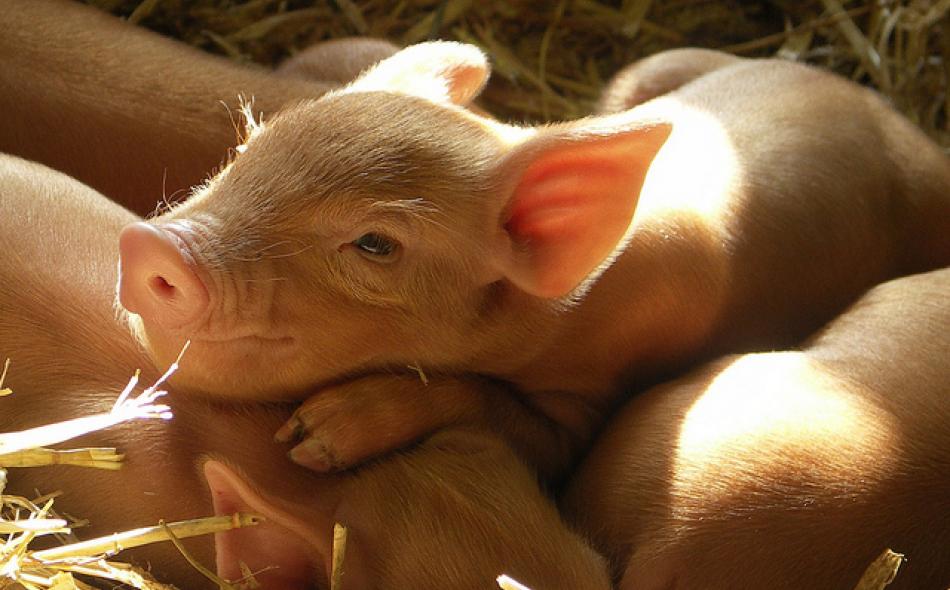 Russ Kremer is co-founder and president of Ozark Mountain Pork Cooperative, which now has 92 producers who provide about 1,400 antibiotic-free hogs per year.

We recently got to know Russ Kremer, lifelong pork farmer, president for 10 years of the Missouri Farmers Union, and co-founder and president of Ozark Mountain Pork Cooperative. At an IATP briefing on Capitol Hill last week, Russ shared the story of how, seeing the effects of raising pigs in an industrial-style operation on the his own health and that of his pigs, he ultimately switched gears and became what he calls and "evangelist for ... non-antibiotic agriculture."

I am a farmer. It’s all I ever wanted to do since I was five years old.

I want to tell you that I’m an advocate for animal agriculture. I talk about my passion for sustainable agriculture.

In the late 80s, I was head of the Missouri Pork Producers. At that time there were 40,000 farms in Missouri that had pigs on them. Today it’s more like 500.

As an agriculture instructor for young adults, I know how important it is for rural kids with opportunities to raise pigs. There’s no better education than having to commit to caring for and raising a litter of pigs.

I worked with pigs on a small sustainable farm all my life. After leaving for college, I convinced my dad to expand our farm. During that expansion we got more industrialized—we were talked into big buildings thinking they were a cure-all. We adopted the use of antibiotics as ways to increase growth.

You need to remember that in rural settings, often times allied industry, including pharmaceutical companies, are our resources—I don’t criticize that, it’s where we learn a lot. In those meetings, in which they feed you, it’s a great social outlet, you pick up stuff that they teach you. It’s where you learn that if you feed this particular ingredient that your hogs will grow faster, be more efficient and make you more money.

In our agricultural system we produced more, and made more money. However, over the years in this system I started to notice things. Prior to using so many antibiotics, when a pig got sick it was easy to treat: you gave it a quick therapeutic dosage and it was over with.

As I saw the progression occur in our new system, I saw that it didn’t work as well any more. Treatments weren’t working. It was a sickening lifestyle for a while. You would go into a building where there were the little pigs and the medium size pigs, and I’d carry a pistol style syringe with me to treat these pigs morning noon and night. And yet, my pigs were dying.

When these pigs would die I would take them for post-mortem tests.

Each time, I would notice that the pigs were becoming less and less sensitive to the antibiotics that they were testing them to.

This really started to bother me, but it didn’t really hit home until one fateful day, in the spring of 1989 when I was riding a 500-pound boar hog to some sows, and the boar swung his head around and his tusk hit me in the lower part of my knee cap.

As a farm boy I didn’t really think much of that. Yeah, it hurt a little but I didn’t really go to doctors, so I simply poured the blood out of my boot, wrapped up my leg and went on my way.

Didn’t think anything of it until about a month later until I took a trip to Lexington Kentucky, and on the descent of the flight to Kentucky my leg that had been injured swelled up to twice its normal size. I did get medical attention then, and my doctor said, “no big deal, you have a strep infection.” At that time he prescribed penicillin, which I took.

But this didn’t cure. Three days later my leg was getting bigger, so I went back to my doctor and he prescribed amoxicillin. That didn’t work. Then azithromycin, then tetracycline, streptomycin. We went through six different antibiotics and nothing worked, and about three weeks later it started to go through my blood stream.

I sat down with my doctor and said, “Doc, I think I might have something that my pig has.” We did some tests and that proved out. So my doctor asked me how I had treated my pig, and he prescribed me the human version of that prescription, put me in the hospital, and the rest of the story is that I’m alive today—it saved my life.

After that incident, I became an evangelist for this type of non-antibiotic agriculture. I went cold turkey—exterminated my diseased herd; went to a different style of growth; went with a drug-free system.

In 1989, after all those years, my hogs went drug free. I didn’t do it because I knew what Whole Foods or Chipotle or Niman Ranch was, I didn’t even know what natural organic meant. I did it because I was so remorseful that I was doing something wrong to society that I quit. It was the right thing to do. It was extremely sustainable to me—I didn’t have to pay $16,000 in drug bills. Finally, it’s been one of the most rewarding lifestyles I could ever have, now dealing with happy, healthy pigs.

This eventually led us 10 years later, after pork prices got really low, we knew that we needed to have a different marketing style, so a group of likeminded producers got together to create the Ozark Mountain Co-op and start a brand.

Part of what changed my life was going to Europe and seeing what was happening over there. I then came back to the U.S. and realizing that the consumers were our friends, and we needed authentic relationships with our customers.

Today this is part education, part work, but we now have 92 producers that are providing about 1,400 antibiotic-free hogs that make their ways to Applegate, Chipotle, Whole Foods, even the restaurant Agraria in Washington D.C.