Industrial Agriculture and the Raising Sea: Do We Have to Choose Between the Devil and the Deep Sea? 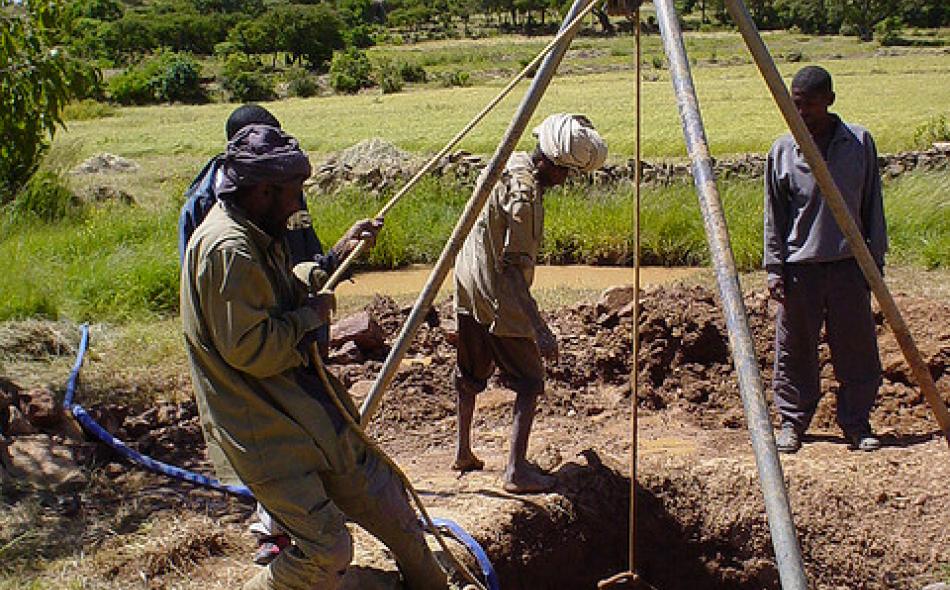 Earlier this week, The Guardian reported on a study that looked at rising sea levels from a new angle. The study found that efforts to meet increasing freshwater demand by harnessing “fossil” groundwater [groundwater that cannot be replenished for millennia under current climate conditions] contributes more to rising sea levels than melting glaciers. Since there it cannot be replenished, tapping groundwater results in land subsidence (downward-shifting of ground surface) and a one-way transfer of water into the oceans. Researchers involved concluded that the deep tube-well drilling for water has contributed to sea level increases by an average of a millimeter every year since 1961. Neither the climate community nor the water community had paid attention to this aspect of tube-well drilling before.

In 2009, an IATP report referred to several other problems of deep tube-well drilling—a technology adapted from the oil industry—focusing on its role in industrial agricultural production. It pointed out that the tube-well “enabled industrial agriculture to expand to areas where such massive water transfers for irrigation were not feasible. Unlike traditional wells, tube-wells give access to “fossil” water in large quantities by driving a tube into deep aquifers and using a pump to suck water up,” that is said to have resulted in an environmental catastrophe in Asia. Withdrawals exceeding natural recharge rates of aquifers are leading to the lowering of water tables and land subsidence in many other parts of the world. For example, in the United States, where 45 percent of irrigation water comes from underground, in the High Plains aquifer (which includes the Ogallala aquifer), water levels have declined more than 100 feet in some areas.

Yet, faced with multiple environmental crises, many countries in Africa are looking at groundwater as the last resort to help deal with their food and water security challenges. Over the last decade, in several African countries the use of treadle pumps (most commonly used by farmers on small plots of land) has been promoted as an affordable option for withdrawing water from shallow aquifers. So far, groundwater bore wells have been confined to a few areas where commercial farming is its primary beneficiary. But it may no longer be confined to small pockets. A recent study by British Geological Survey estimated the total groundwater storage in Africa to be 0.66 million km (0.36–1.75 million km).3 Even though they warn that all of this water is not available for abstraction, it seems to suggest that there is plenty of water to meet the “growth” needs of Africa. This study comes out at a time when many international agencies are calling for investment in groundwater development as a way for meet the Millennium Development Goals (MDGS).

However, the temptation to promote groundwater development needs to be tempered with caution, as we know from the Asian experience. Our report argued that the “the easy access to state-subsidized energy services and equipment” enabled the expansion of industrial farming to otherwise water-stressed areas of Asian countries such as China, India and Pakistan. As is well known, the World Bank and other multilateral agencies played a major role in the spread of this technology in South Asia. Initiatives such as GW-MATE, which look at approaches to reconciling groundwater demand with resources, indicate that the World Bank and other similar organizations recognize the mistakes of the past. This new caution on groundwater development doesn’t appear to be matched by other new initiatives.

There has been growing attention to land grabs, but perhaps less on how they serve to appropriate the natural resources under the land. Speakers at a recent workshop at the alternative water forum in Marseilles, such as Henk Hobbelink from GRAIN and Rutgerd Boelens from Wageningen University, explained how in many ways land grabbing is about water grabbing. Information gleaned from the British Geological Survey that looked at groundwater resources in Africa might help answer questions around the extent of water grabbing in Africa. Given that these investments are in the context of raising export crops, investors can use the survey to ensure plentiful water for irrigation; deep-well drilling may be adopted as a way to access water from deep aquifers or to deal with depleting water tables.

Second, there is the global focus on African food security. At the G-8 summit on May 18–19, President Obama announced a plan to boost food security and farm productivity in Africa. Responding to the plan, “New Alliance for Food Security and Nutrition,”an IATP blog pointed out that for the African peasantry, the call to “refine policies in order to improve investment opportunities,” “sounds hauntingly like the conditionalities of old (and current, much-criticized, bilateral investment agreements).” G-8’s reliance on corporations—“accountable to their shareholders, obliged to make a profit […] bound by law, but not by the public interest”—in the name of African food security is a way of bringing in farms that have so far been beyond the reach of corporations and industrial agricultural sector. Once again, it is likely that the expansion of industrial agriculture will be through the expansion of tube-well irrigation.

The third point may be extrapolated on the basis of the Asian experience. In addition to the environmental costs listed earlier, there are also social costs to deep well drilling of groundwater. In Asia, deep tube-well irrigation has resulted in most of the hand-dug wells and shallower bore-wells going dry, as ever-deeper wells get dug. Large scale extraction of groundwater is also used for water intensive industries, and that too results in similar experiences. This can affect poorer people’s access to drinking water, as hand-dug wells and hand pumps (shallow tube-wells) are often the primary source for drinking water for many communities. For inland regions, deep drilling can result in land subsidence. In coastal areas it can cause salinity ingress (seepage of sea water inland through underground water flows) resulting in the salinization of groundwater. Often, over-drafting of groundwater for industrial agriculture comes at the cost of basic water needs of the poor and traditional farming systems.

It is in this context that the new report on how global fresh water demand is driving sea-level rise faster than glacier melt becomes important. The researchers at the British Geological Survey have said that the estimated volume of available groundwater is more than 100 times estimates of annual renewable freshwater resources on Africa. This should be taken as a word of caution, so that Africa does not repeat Asia’s folly when it comes to groundwater use. With the available data, groundwater depletion can be monitored and regulations and incentives can be put in place to ensure that replenishment equals water withdrawals from the aquifer.

Whether Africa is able to do this or not depends on the agricultural development path they are able to adopt towards reaching food security goals. But at the moment they do not have a space to make that choice. Those decisions about their path are being made in the G-8, G-20, Rio+20 and other similar international and regional forums. And not only are these forums influenced by International Financial Institutions like World Bank, they are also under threat from corporate capture, as has been said in a recent joint civil society statement.

This is why many African civil society organizations are seeking greater local control. In a recent letter anticipating the G-8 announcement, the West African farm network ROPPA reiterated that, “food security and sovereignty are the basis of our general development, as all of the African governments underline. It is a strategic challenge. This is why we must build our food policy on our own resources as is done in the other regions of the world. The G8 and the G20 can in no way be considered the appropriate fora for decisions of this nature.”