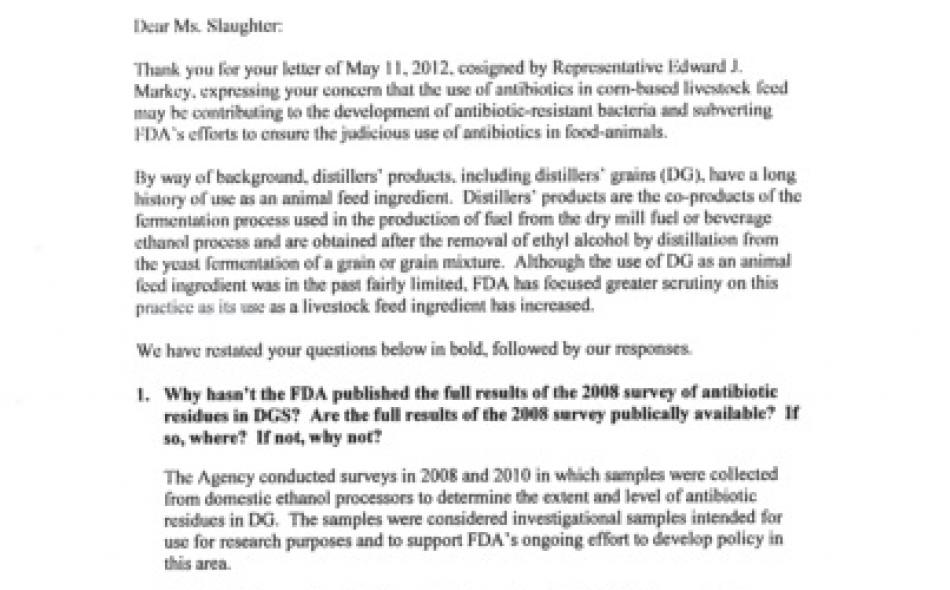 What does it take to get the Food and Drug Administration (FDA) to fulfill their duty to protect public health? More than a letter from two members of Congress, apparently.

FDA finally responded to a letter sent by Rep. Louise Slaughter (D-NY), Congress’ only microbiologist, and Rep. Edward Markey (D-MA) last May. Following on the heels of the release of IATP’s Bugs in the System report, the letter asked what FDA was doing to control the unapproved, and possibly illegal, marketing of antibiotics by animal drug companies for use in ethanol production.

The FDA response to Slaughter and Markey’s letter in fact support’s our report’s conclusions. In the letter, the FDA states it has not recognized any ethanol antibiotics as safe, nor has it completed a review of the food additive petitions that have been submitted by the manufacturers.

Despite those admissions, and a clearly stated acknowledgement in the letter that the agency has not carried out sufficient safety reviews to properly assess the multiple risks posed by antibiotic use in ethanol, the FDA continues to allow the unapproved marketing of antibiotics to the ethanol industry.

Big Pharma counters our analysis by claiming that the FDA has not yet issued an official guidance regarding the use and regulation of antibiotics in ethanol production. In a phone call, FDA officials told IATP that they are indeed creating a guidance, but it won’t be released until at least the early part of 2013.

The lack of proper guidance, however, should not be grounds for FDA failing to adhere to the law. Bugs in the System lays out a clear case showing why federal code requires the FDA to regulate antibiotic use in ethanol production. Yesterday’s letter from the FDA to Reps. Slaughter and Markey indicates that there exists more than enough uncertainty around the human and animal health risks of antibiotic use in ethanol production—including around antibiotic resistance—to put an immediate halt to antibiotic sales to the ethanol industry until those risks are assessed and a proper approval process carried out.