Moving ahead on food justice 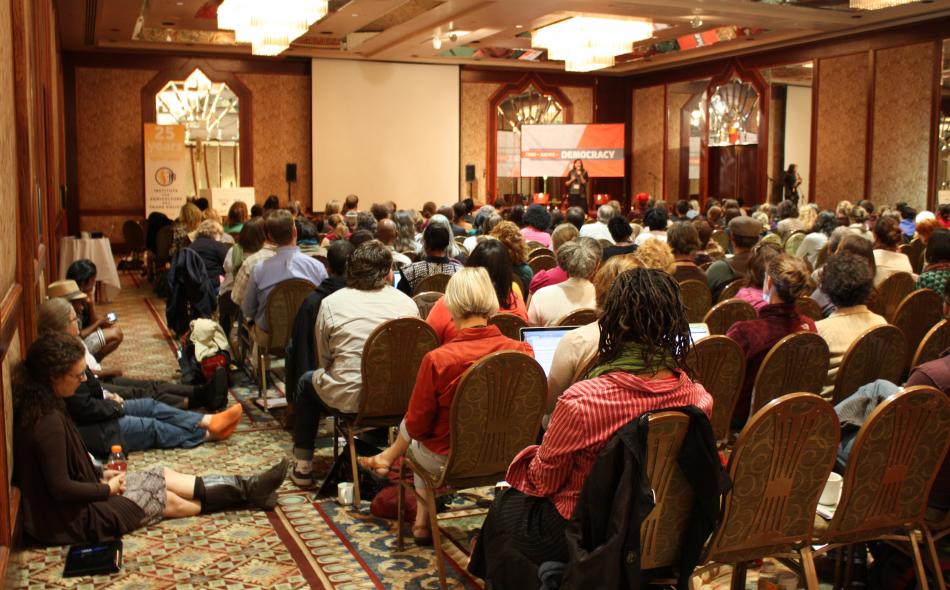 On September 24–26, 2012, hundreds of food justice advocates gathered in Minneapolis for the Food + Justice = Democracy conference. One of the primary features of the conference was the use of a People’s Movement Assembly process to craft principles around food justice. View and comment on the draft Principles of Food Justice or read a summary of the conference and its aims below. Join IATP for a post-conference webinar to review the outcomes and plan for moving forward on November 15. RSVP now.

The U.S food system has never been just, fair or healthy. This is a shocking statement to some, but to the vast majority of people of color and tribal nations in the United States this has always been a reality. This sentiment was the thread connecting many of the conversations throughout all three days of IATP’s Food + Justice = Democracy conference last month in Minneapolis.

African Americans, Native Americans, Asian Americans and Latinos experience higher incidence of chronic diseases, higher mortality, and poorer overall health outcomes. To address the health disparities that those communities face, we must recognize their experience in the overall analysis of the problem of a failed food and agriculture system.

Contemporary food movements emphasize the return to and protection of the family farm. This emphasis paints a pristine picture of America that is foreign to many communities of color. Grounding the brokenness of the food system solely in this perspective ignores the history of Native Americans and their removal from native land that prepared the country for the arrival of European immigrants. This analysis also ignores the enslavement of Africans and the unpaid labor force that created much of the wealth for corporate America. It cannot be one analysis over the other: We must have an analysis that represents the reality of all communities.

The call for food justice is a call for inclusion of every community, ethnic group, class and gender identity.

The Food + Justice = Democracy conference provided an opportunity to issue that call and bring together as many strands of the food movement as possible and unite our voices to call for an end to injustice in our food system.

Reframing the narrative of the food system is no easy task. It requires incorporating the truth about our food system and facilitating a deep engagement with the communities that feel most exploited. The space and opportunities to engage are limited.

The Food + Justice = Democracy conference organized around narratives instead of traditional presentations, and peoples movement assemblies (PMA) instead of workshops. The idea was to maximize the brain power of 300+ activists from around the country by coming together to find the spark of the movement for food justice—an ambitious endeavor seeking to ignite conversations with the purpose of crafting a cohesive public policy agenda for food justice.

The conference reframed the industrial food and agriculture narrative into five critical assumptions:

The conference structure used narratives to deliver a new framework. This process allowed conference attendees to hear presentation that highlighted the complexities of racial, ethic, class and gender identity and their impact on the food system.

Narratives that describe the lives of African Americans, Native Americans, Hmong and Latino communities were shared without forfeiting the added layers of class and gender. This proved a much more dynamic and instructive way to discuss disparities in America.

The conference used People Movement Assemblies (PMAs) to help conference attendees develop a national vision for the food system based on justice. PMAs were lightly structured conversations led by groups and activists that are working toward a food justice.

The PMAs were divided into these areas:

Each PMA was tasked with creating a set of principles that captured the vision of what a fair, just and healthy food system would do for our communities under that category. The principles of food justice, in draft form, will travel around the country to solicit input from every community that wants to talk about organizing for food justice.

To get involved in the process moving forward, read and share your comments on the draft principles. Also, watch for details on upcoming opportunities, including a webinar on November 15, and a Facebook chat hosted by IATP.

View and comment on the draft Principles of Food Justice.