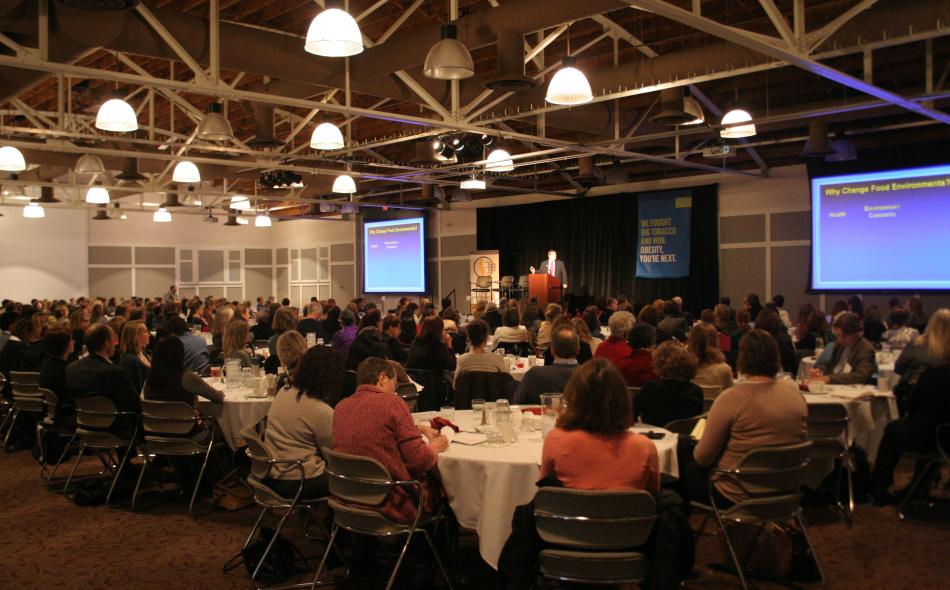 Dr. Kelly Brownell speaking at the Minnesota State of the Plate meeting in January 2012.

How could the landscape of food and farming policy change if health sector workers and consumers understood what it takes for farmers to grow and produce enough healthy food?

Earlier this year, IATP and Blue Cross Blue Shield of Minnesota created a historic statewide convening to foster dialogue and understanding between the health and agriculture sectors—State of the Plate: Minnesota Healthy Food Futures. Now, that meeting has served as proof of concept for cross-sector meetings in eight additional states: Texas, Illinois, Montana, Oregon, New York, Kansas, Mississippi and Iowa. While the purpose of all the meetings was to begin building bridges between the health and agriculture sectors, many of the meetings also included representatives from the anti-hunger, culinary and philanthropic sectors, among others.

IATP provided technical assistance to each of the states as part of its involvement on the steering team of the national Healthy Farms, Healthy People Coalition, which held the first national cross-sector convening in Washington, D.C. in 2011. That historic national meeting included representatives from diverse organizations such as The Farm Bureau, The American Public Health Association and United Fresh. The coalition also provided financial support for seven of the nine state meetings via a competitive application process that produced 61 proposals. The Minnesota and Illinois meetings received support from local funders and we hope other states will follow suit in 2013.

Participants across all the meetings were energized by the opportunity to learn about key issues from new perspectives and the prospect of new partnerships between the health and agriculture communities. The hope is that working across sectors will foster more innovative food system policy to support public health goals for healthier eating, but also support our farmers’ ability to make a living producing healthier foods like fruits, vegetables and food animals that serve those goals.

Minnesota kicked off the year with its meeting in early January and the year ended with meetings in Iowa and Kansas in mid-November, with most of the other meetings occurring in early fall. The meetings ranged in size from 42 participants in the less populated state of Montana to more than 335 participants in Minnesota, with most of the remaining meetings engaging approximately 75–100 health and agriculture stakeholders.

More than one of the meetings opened with a diverse panel of speakers from different sectors sharing their perspectives on key food system issues. Others opened with a keynote speakers, including Dr. Kelly Brownell of Yale’s Rudd Center who spoke to the Minnesota audience about the need to make healthy food the “optimal default” through policy and environment changes; Bob Martin, senior policy advisor at the Center for a Livable Future at Johns Hopkins School of Public Health made the case to the Kansas audience for a public health perspective on agriculture, particularly the linkages between the growing number of human antibiotic-resistant infections and the widespread use of antibiotics in animal agriculture; and Ken Meter of Crossroads Resource Center described the political economy of the food system in central Illinois and outlined an opportunity to reverse the trend of food and farm dollars flowing out of the region to distant corporations rather than supporting local producers and businesses.

Discussion of local and regional food system issues were prominent at all the meetings, from the Mississippi and Montana meetings which focused on building farm to institution programs in the states, to New York where food business owners participated in discussions about ways to expand consumer access to state products. In Oregon, participants discussed a state law prohibiting undocumented workers from having driver’s licenses threatens to hurt local farms and food businesses across the state, as well as worsen poverty among that population of workers and their families.

Other key issues discussed included the need for better public incentives and crop insurance for producers of fruits and vegetables, the need for scale-appropriate food safety laws that support development of local food systems, the need to reform state procurement laws to allow for more local sourcing and increasing access to federal nutrition programs at farmers markets.

It is our hope that work will continue on these and other key policy issues within the states and through creation of a national community of practice made up of leaders from each of the nine states, as well as others. With all this remarkable work bubbling up at the state level, shared learning about key issues and innovative policy development could spur similar discussions in additional states, as well as drive creation of healthier national food and farming systems policy.