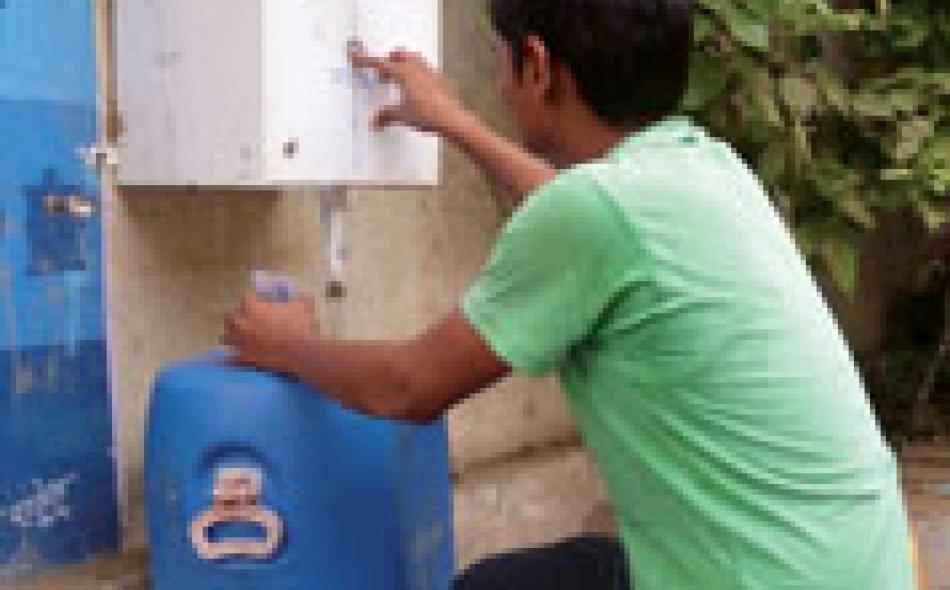 For-profit companies have begun setting up pre-paid water kiosks (or water ATMs) that dispense units of water upon the insertion of a pre-paid card. Image credit: Ankur Paliwal/CSE

Writing in National Geographic in December 2012 about “small-scale irrigation techniques with simple buckets, affordable pumps, drip lines, and other equipment” that “are enabling farm families to weather dry seasons, raise yields, diversify their crops, and lift themselves out of poverty” water expert Sandra Postel of the Global Water Policy Project cautioned against reckless land and water-related investments in Africa. “[U]nless African governments and foreign interests lend support to these farmer-driven initiatives, rather than undermine them through land and water deals that benefit large-scale, commercial schemes, the best opportunity in decades for societal advancement in the region will be squandered.”

That same month, the online publication Market Oracle reported that “[t]he new ‘water barons’—the Wall Street banks and elitist multibillionaires—are buying up water all over the world at unprecedented pace.” The report reveals two phenomena that have been gathering speed, and that could potentially lead to profit accumulation at the cost of communities and commons —the expansion of market instruments beyond the water supply and sanitation to other areas of water governance, and the increasingly prominent role of financial institutions.

In several instances this has meant that the government itself has set up public corporations that run like a business, contracting out water supply and sanitation operations to those with expertise, or entering into public–private–partnerships, often with water multinationals. This happened recently in Nagpur and New Delhi, India. In most rural areas, ensuring a clean drinking water supply and sanitation continues to be a challenge. For-profit companies such as Sarvajal have begun setting up pre-paid water kiosks (or water ATMs) that would dispense units of water upon the insertion of a pre-paid card. It is no surprise that these are popular among people who otherwise have no access to clean drinking water.

With climate change, however, the water crisis is no longer perceived as confined to developing countries or even primarily a concern related to water supply and sanitation. Fresh water commons are becoming degraded and depleted in both developed and developing countries. In the United States, diversion of water for expanded commodity crop production, biofuels and gas hydro-fracking is compounding the crisis in rural areas. In areas ranging from the Ogallala aquifer to the Great Lakes in North America, water has been referred to as liquid gold. Billionaires such as T. Boone Pickens have been buying up land overlying the Ogallala aquifer, acquiring water rights; companies such as Dow Chemicals, with a long history of water pollution, are investing in the business of water purification, making pollution itself a cash-cow.

But chemical companies are not alone: GE and its competitor Siemens have extensive portfolios that include an array of water technologies to serve the needs of industrial customers, municipal water suppliers or governments. (In the last year and a half two Minnesota based companies have become large players in this business—Ecolab, by acquiring Nalco and Pentair by merging with Tyco's Flow Control unit—both now belonging to S&P’s 500.)

The financial industry has also zeroed in on water. In the summer of 2011, Citigroup issued a report on water investments. The much quoted statement by Willem Buiter (chief economist at Citigroup) gives an inkling of Citigroup’s conclusion: “Water as an asset class will, in my view, become eventually the single most important physical-commodity based asset class, dwarfing oil, copper, agricultural commodities and precious metals.” Once again, several others had already seen water as an important investment opportunity, including GE’s Energy Financial Services, Goldman Sachs and several asset management firms that are involved investing in farmland in Asia, Africa, South America and Eastern Europe.

Given these recent trends, initiatives that track the water use of companies or map information regarding water related risks could be double edged. Some examples include the ‘water disclosure project’ and the ‘water-mapping project’. Both are initiated by non-profits/ think-tanks, the former by UK-based Carbon Disclosure Project and the latter by the US-based World Resources Institute. While distinct, they are linked by their shared constituency: global investors concerned about water-related risks. These initiatives could help companies identify and reduce their water footprint, or could lead to company investments that follow water and grab it.

The Carbon Disclosure Project’s water disclosure project seeks to help businesses and institutional investors understand the risks and opportunities associated with water scarcity and other water-related issues. According to its most recent report, issued on behalf of 470 investors with assets of $50 trillion USD, over half the respondents to their survey have experienced water-related challenges in the preceding five years, translating into disruptions in operations, increases in expenses and other detrimental impacts.

Aqueduct Alliance and its water mapping project, which aims to provide companies with an unprecedented level of detail on global water risks, seems at one level a direct response to the findings of the global water disclosure reports by CDP. General Electric, Goldman Sachs and the Washington-based think tank World Resources Institute are the founding members of the Aqueduct Alliance. All of them identify water-related risks as detrimental to profitability, continued economic growth and environmental sustainability. The water maps, with their unprecedented level of detail and resolution, seek to combine advanced hydrological data with geographically specific indicators that capture social, economic, and governance factors. But this initiative has given rise to concerns that such information gives companies and investors unprecedented details of water-related information in some of the world's largest river basins.

Many of these investors, described as the “new water barons” in Jo-Shing Yang’s article "Profiting from Your Thirst as Global Elite Rush to Control Water Worldwide," are the same ones who have profited from speculating on agricultural contracts and contributing to the food crisis of the past few years. The food crisis and recent droughts have confirmed that controlling the source of food—the land and the water that flows under or by it—are equally or even more important.

A closer look at the land-related investments in Africa, for example, show that land grabbing is not simply an investment, but also an attempt to capture the water underneath. At the recent annual Global AgInvesting Conference (with well over 370 participants), the asset management groups and global farm businesses showcased their plans, including purchases of vast tracts of lands in varying locations around the globe. With tools such as water maps, such investors are further advantaged. The global rush for land grabbing, as well as the resistance to it, shows that all stake-holders—pension funds, Wall Street or nation-states on the one hand or the people who currently use these lands and waters, and their advocates on the other—are well aware of the life-and-death nature of land (and water) grabbing, especially in the case of developing countries.

National and international regulatory mechanisms must be put in place to ensure that basic resources such as land, water and the means for accessing fresh water do not become merely the means for profit accumulation for the wealthy, but are governed in a way that ensures the basic livelihood of those most dependent on it. The last session of the Committee on World Food Security ﻿ (a United Nations mechanism set up to address the food crisis)﻿ was a good starting point, and has set in motion a series of consultations on principles for agricultural investments. Civil Society Organizations are tracking the various ways in which regulations may develop in national contexts: simply facilitate land grabbing, mitigate negative impacts and maximize opportunities or block (or roll-back) land grabbing altogether. Ultimately, any policy approaches must prioritize local communities’ access to food and water: Any water-related investments needs to be about allaying their livelihood risks and enhancing their ability to realize their rights, whether it is in developing countries or developed countries.