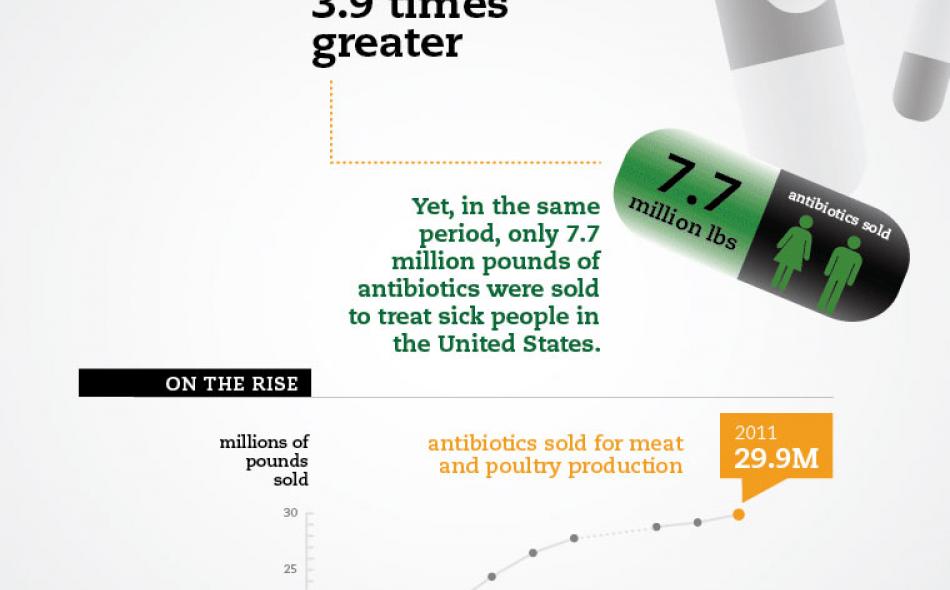 Image by the Pew Campaign on Human Health and Industrial Farming. See the full-size version.

With legislation in 2008, Congress for the first time asked the Food and Drug Administration (FDA) to collect and report to the public the overall sales of antibiotics used in food animals. February 6 marked the release of a third year’s worth of data.

Penicillins and tetracyclines sold for animal use increased for the second year in a row. From 11.5 million pounds in 2009, sales rose to 14.4 million pounds in 2011. The two classes of antibiotics remain the most commonly used antibiotics in livestock and poultry, despite their obvious import for treating infections in people as well. In 2011, animal sales accounted for 38 percent of total penicillin sales and 98 percent of total tetracycline sales, including in humans.

Use of antibiotics in animals overall also continues to rise, to 29.9 million pounds in 2011. That compares with at least 7.3 pounds (according to FDA data, comparing to 7.7 million according to Pew) sold for use in humans. The fact that 3.9 times more antibiotics are used in animals than humans, as this new infographic illustrates from the PEW Charitable Trusts, may shock most Americans.

For 34 years, the FDA considered the routine use of penicillins and tetracyclines in animal feed, for purposes like growth promotion, a public health threat. The agency had moved in 1977 to withdraw its approval for these animal feed products on the grounds that such use had not been shown to be safe for people. That official stance remained on the books until 2011.

IATP produced a recent bibliography listing 147 studies comprising a compelling body of evidence that this routine use antibiotics at nontherapeutic levels in animal feed helps drive an epidemic of expensive, hard-to-treat superbug infections in people, including those coming from a meat supply replete with bacteria resistant to multiple antibiotics.

In December 2011, FDA backtracked from its 1977 proposal claiming the move to protect public health by ending addition of penicillins and tetracyclines to animal feed was now outdated. Instead, said FDA, it was changing focus, by asking pharmaceutical companies to voluntarily to reduce the sales of their antibiotic products sold for use in animal feed.

So, if the success of FDA’s approach strikes you as unlikely, you’re not alone. Along with my partners in Keep Antibiotics Working I have been quite skeptical of this voluntary approach, but apparently there’s been skepticism within the FDA as well.

Last summer, a Federal judge ordered the FDA to reverse its decision and withdraw the animal products after all. In effect, the judge said that the stand first taken by the FDA in 1977 had been right. The FDA has appealed the judge’s decision.

“In the face of the antibiotic resistance crisis, we cannot afford to be standing still. We need strong action to combat the overuse of antibiotics in animal agriculture,” said Steven Roach, Public Health Program Director at Food Animal Concerns Trust (FACT) and a member of Keep Antibiotics Working.

Nothing less will suffice for the public’s health. The World Economic Forum recently reported, that overuse and misuse of antibiotics has created the real and immediate threat that once easily treatable infections will rage, and be unresponsive to treatment with any existing antibiotics.

As a parent of young children who get bacterial bronchitis, ear infections and skin infections, that keeps me awake at night.