Work in a poultry plant? The good news is you still have a job, the bad news is it may be killing you 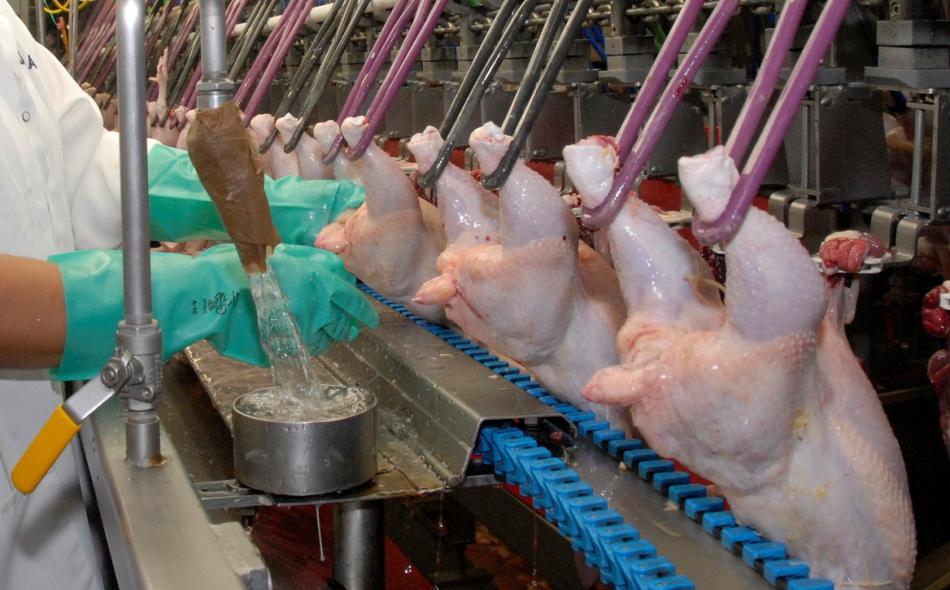 Earlier this spring, the USDA’s Food Safety and Inspection Service (FSIS) was in the news because of a threat that the agency’s 8000+ inspectors would be furloughed as part of the sequester. Since, by law, all meat packing processing facilities in the U.S. must have a USDA inspector on site in order to operate, this would have brought the U.S. beef, pork and poultry industries to a screeching halt.

Of course, as soon as one of the most powerful, Inside-the-Beltway industries objects to any part of the sequester, Congress decides that although the legislation was designed precisely to inflict painful cuts in order to force action, they’ll make an exception in this one little case. (All of which shows that the real purpose of Budget Hysteria is to cut the parts of government that help the politically powerless: poor people, workers, sick people and children.) So when President Obama signed the continuing resolution, which keeps the government operating for the next six months, it included an amendment allowing the USDA to make cuts elsewhere in order to keep the inspectors on the job.

Unfortunately, it seems the inspectors are not breathing so easy, if at all. The Washington Post reports that the increased use of microbe-killing chemicals in poultry processing facilities has created a serious threat to the health of workers in those facilities. After the death of an otherwise-healthy FSIS inspector in 2011, a federal investigation found that the chemicals causing the issue have become more prevalent as line speeds in the facilities have increased in recent years. Those findings have been confirmed by the Government Accountability Project’s Food Integrity Campaign. More meat moving past the same number of eyes on the processing line means more chances that fecal matter and other contaminants will be missed. The industry solution: douse everything with chlorine and other anti-bacterial chemicals. It’s exposure to these chemicals that is now being linked to “asthma and other severe respiratory problems, burns, rashes, irritated eyes, and sinus ulcers and other sinus problems.”

The industry claims these increases in line speeds are to meet increasing consumer demand, but which consumers are they referring to? Per capita chicken consumption in the U.S. has been flat for ten years, turkey for more than twenty. So the real reason appears to be either increased exports (And no, exported chicken is not feeding the hungry of the world.) or it’s simply a way for industry to increase their profits at the expense of workers. Not to mention consumers, who for no good reason are now eating meat that is contaminated with fecal matter and then doused in chemicals.

Further, despite the well-documented risks, the “department [of agriculture] is now poised to allow a further increase in line speeds, boosting the maximum by about 25 percent” to “make poultry production more efficient and reduce the number of government inspectors while increasing the number of private company inspectors,” according to the Washington Post.

The brunt of these “efficiency” gains will be borne by the invisible human infrastructure that props up our unjust and unhealthy food system: food chain workers. While there may be one or two inspectors in a poultry plant on a typical day, there are dozens or hundreds of workers in each facility who are exposed to the same chemicals, probably more directly and for longer periods of time. Even before this particular piece of news, meat processing jobs are already among the lowest paying and most dangerous jobs in America—mostly made up of people of color, including many undocumented workers who are afraid to report health and safety violations or other abuses because of their immigration status.

So while Congress goes out of their way to make sure that corporations are able to sidestep the sequester and continue (and increase!) dangerous practices that boost profits for the very few, workers in these facilities remain invisible to policymakers and continue to pay the price for our industrial meat system with their health and livelihoods.