Cadmium, mercury and phthalates—oh my! 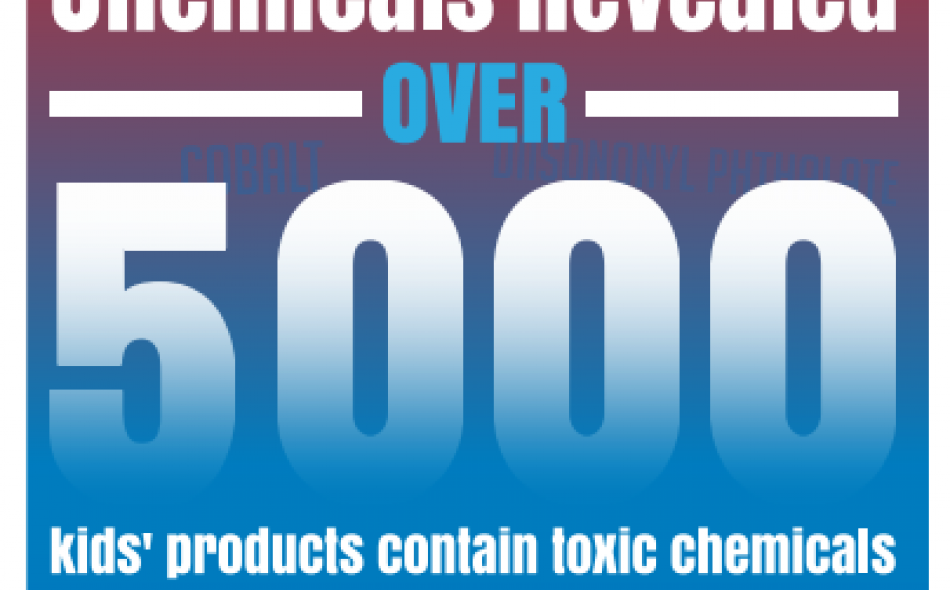 Over 5000 children’s products contain toxic chemicals linked to cancer, hormone disruption and reproductive problems, including the toxic metals, cadmium, mercury and antimony, as well as phthalates and solvents. A new report by the Washington Toxics Coalition and Safer States reveals the results of manufacturer reporting to the Washington State Department of Ecology.

Makers of kids’ products reported using 41 of the 66 chemicals identified by WA Ecology as a concern for children’s health. Major manufacturers who reported using the chemicals in their products include Walmart, Gap, Gymboree, Hallmark, H & M and others. They use these chemicals in an array of kids’ products, including clothing, footwear, toys, games, jewelry, accessories, baby products, furniture, bedding, arts and crafts supplies and personal care products. Besides exposing kids in the products themselves, some of these chemicals, for example toxic flame retardants, build up in the environment and in the food we eat.

Examples of product categories reported to contain toxic chemicals include:

The chemical reports are required under Washington State’s Children’s Safe Products Act of 2008. A searchable database of chemical use reports filed with the Washington State Department of Ecology is available at http://www.ecy.wa.gov/programs/swfa/cspa/search.html.

Like Washington, the Minnesota Department of Health has published a list or priority chemicals in children’s products. Eight of the nine chemicals on this list are also on the Washington list. The nine priority chemicals are lead, cadmium, bisphenol A, formaldehyde, two brominated flame retardants and three phthalates. However, in Minnesota, manufacturers are not required to report if they use a priority chemical in a children’s product—so both states agencies and consumers are in the dark when it comes to these chemicals.  Last month Minnesota’s Senate Commerce Committee voted down the Toxic Free Kids Act of 2013, a bill that would have required such reporting.

Minnesota can take a lesson from the Washington experience. Manufacturers were able to produce this information without undue burden and yes these chemicals are in products our kids are chewing on, touching and inhaling every day! It’s time for Minnesota to follow Washington’s lead and require manufacturers to submit the same type of data.   I urge the Minnesota Legislature to come back in 2014 and pass the Toxic Free Kids Act.