Germans speaking out against industrial meat and agriculture 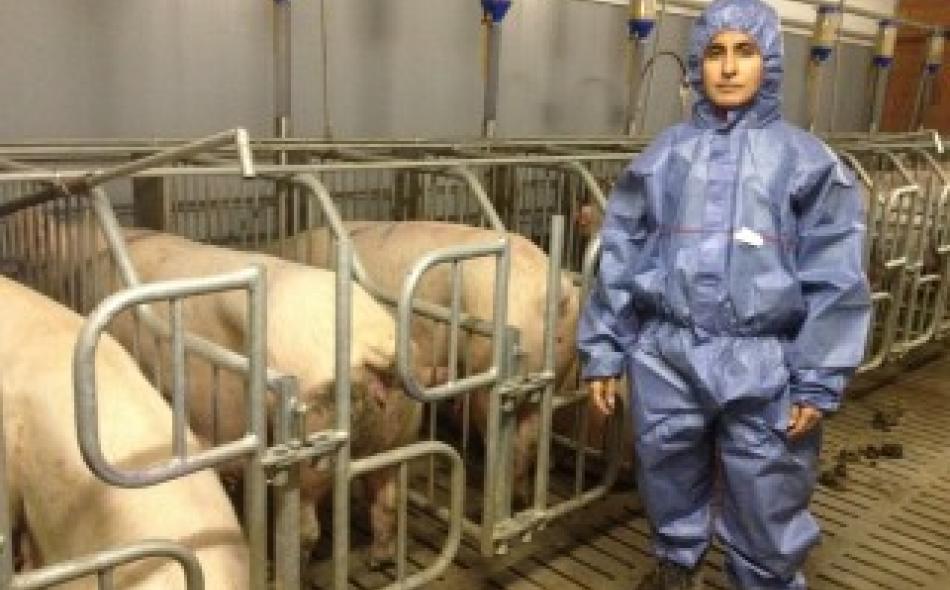 One of Berlin’s big newspapers, the Berlin Zeitung, flashed images of little piglets today and of mass produced turkeys. This is part of a bigger build up towards a major demonstration on January 18 in which over 20,000 citizens are expected in Berlin to protest against industrial farming in the country—mass meat production being the vivid centerpiece for why it is so bad for people and the environment.

I have been in Germany for the last few weeks and am struck by how hot this topic is becoming—capturing media attention and putting the Green Party into elected positions in different states where animal factory farms have become a major problem. A slow movement is building, garnering ever increasing consumer support towards direct farmer-to-consumer marketing of organic, small-scale, locally produced, humane agriculture products.

The campaign that is organizing events and the demonstration during Germany’s “Green Week” is called "Meine Landwirtschaft" or “My Agriculture,” building a message to put back agriculture into the hands of better stewards who can respect soil, water and integrate human and animal health into good food for the people and the planet. This year’s theme for the campaign demonstration is "Wir Haben Agrarindustrie Satt!" or "We’re fed up with industrial agriculture!" The poster child: a big pig face.

Speaking of pigs, just after the New Year I visited a sow-raising industrial pig farm near Muenster (about a 4-hour train ride Southwest of Berlin)—the farmer had started out with 400 sows and is now in the business of feeding and impregnating over 1,200 of them. He has them delivered by a company when they have just come of age and hands them off to another contract farmer just as they are about to give birth. The delivery of piglets is more risky.

Many of the people actively working on problems with industrial meat production were surprised that I managed to get access to such a farm—and it’s true, without connections of a friend of a friend, I would not have been able to see such an operation. It is also nearly impossible to visit such operations in the U.S. I got lucky, I guess.

The visit shocked my senses; The extreme smell of ammonia and methane saturated my pores and clothes and the extremely cruel conditions these poor animals are in made me anxious to get out within minutes of entering. We were made to wear boots and these astronaut-like suits/coveralls that would keep our clothes from smelling and would hopefully prevent infection (both human to pig and pig to human).

The producer spoke at length about his operations—his mechanized feeding process, the breeds, the way that each sow is inseminated. The details he failed to mention are just as important, like the excessive use of hormones in the industry so that sows are fertile and give birth to piglets at the same time. This is efficient for producers so that no gestation crate is empty at any given time during the year. The faster the turnover, the more uniform the sows and piglets, the greater the number of piglets born, the more profitable the business.

These crates are so narrow that these poor animals can only stand and face their feeding troughs, unable even to turn around. German rules mandate that after 35 days of being pregnant, these sows must be able to have more space for some hours during the day until they give birth. I saw these more “spacious” stalls where about 5–6 sows sit, indoors with cement floors and gaps that allow for urine and manure to pass through (which generate all the smell and pollution).

Incidentally, the headlines in today’s paper are also about hormone use in sows and how the danger to human health. BUND, Friends of the Earth Germany, released a high-profile report yesterday on the excessive use of hormones with sows in the German pork industry. This is likely no different than sow rearing in the U.S.

I spoke at length last evening with Reinhild Benning, BUND’s agriculture expert, and she told me that Germany’s data on hormone use in the animal industry is ten years old. The evidence they have gathered based on this old data indicates that these hormones contaminate groundwater and end up in drinking water sources. Excessive hormones, such as steroids that are used in industrial pork production, can be carcinogenic, leading to higher rates of prostate and breast cancer, infertility and even early puberty in youth. She told me that she did 12 radio interviews yesterday on the subject. Their press conference was also well-attended followed by interviews by several newspapers. Several other colleagues across Berlin were interviewed on their take of the issue.

This is perhaps the most exciting aspect of these developments: German media and its readers are interested in knowing about these issues and are beginning to demand change.  I would love to see such an interest in the U.S. For instance, wouldn’t it be great to imagine 20,000 Americans demonstrating against this industrial production model after news broke out in October that antibiotic-resistant salmonella was found in several Foster Farm poultry products, sickening over 16,000 people.

The Henrich Boell Foundation in Berlin is launching its second annual “Meat Atlas: Facts and Figures about the animals we eat” with another press conference. IATP is one of the 26 contributors to this atlas. Stay tuned for more blogs on these issues and on IATP’s own upcoming publications on industrial meat production in China. Sign up to receive IATP's latest work in this area, including the forthcoming reports, at www.iatp.org/industrial-meat.