World Water Day 2016: A water justice toolkit towards public water for all 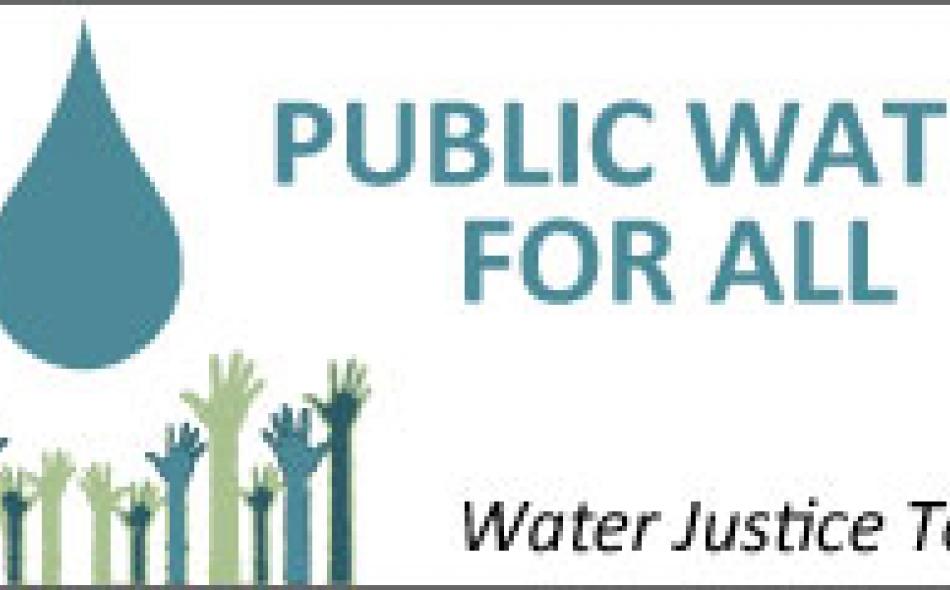 As there are more and more calls that public water authorities rebuild their water infrastructure and improve the quality of water supply and sanitation services, the first module of a new Water Justice Toolkit has just been released to celebrate this World Water Day: March 22, 2016.  This toolkit, “Public Water for All,” will be of use to all those interested in fighting public-private partnerships and promoting effective and sustainable provision of drinking water supply and sanitation services. It has three sections. As Meera Karunananthan (who coordinated the project) notes while introducing it, the module reflects the collective experiences of organizations and grassroots groups from around the world that are loosely connected through the global water justice movement.

The first section is a guide to re-municipalization and draws on the extensive research on the successful efforts by communities to reverse privatization. Researchers have documented that between March 2000 and March 2015, there have been 235 cases of water re-municipalization in 37 countries, affecting more than 100 million people.

Privatization and public-private partnerships (PPPs) are often introduced (at the advice of the proponents of privatization) by local governments hoping to reduce public debt, increase service efficiency and introduce new technologies and new investment for infrastructure. As I wrote a while ago, in most such cases through the late 1990s and 2000s, the private sector did not make the kind of investments that policymakers had hoped for. And not only that, “price hikes and deterioration in the quality of services (associated with a cutback in workforces amongst others) had become a norm where privatization had been introduced. Water cutoffs (sometimes in response to non-payment of bills) gave rise to a questioning of privatization.” Disenchanted communities, public operators and local authorities figured that partnerships with other public operators could generate economies of scale, and that such public-public partnerships (PuPs) would strengthen operators’ capacities to solve problems. Public water operators began joining forces within countries and across borders to facilitate the re-municipalization process.

As the re-municipalization guide points out, the growing list of re-municipalized utilities from around the world demonstrates that this model is successful. It concludes by providing a check list for citizens and policy makers to consider, as they prepare to re-municipalize water services.

The second section is a collection of case studies on public-community partnerships in Latin America (carried out under the auspices of the The Platform for Public and Community Partnerships of the Americas, or PAPC), a form of public-public partnerships (PuPs). As one of the objectives of PuPs is improving participation; they have the potential to “easily and flexibly involve civil society actors as well, including trade unions, community groups and citizens.” However, there are some distinct characteristics that are specific to public-community partnerships, such as  the recognition that public-community partnership is a not-for-profit social agreement; that no form of commodification, commercialization or privatization of water (including outsourcing or sub-contracting to private entities) is acceptable; and the shared belief amongst all parties that water is a fundamental human right and that water and sanitation should be managed as being part of the commons.  These have not only provided communities with a powerful alternative to privatization but have also supported initiatives to build environmental sustainability concerns into water services provision.

While states have an obligation to ensure that the human rights to water and sanitation are guaranteed to all, state-run systems do not always meet the needs of communities. The Latin American cases discussed here show that public-community partnerships strengthen the local and national capacity of the communities, social movements and workers. They do so by promoting processes of local and international cooperation based on solidarity and horizontal decision making amongst all those (community organizations, public utilities, cooperatives, unions) engaged in the provision of basic water and/or sanitation services. For PAPC, the term “public” signifies a “commons-based management system, which treats water as belonging to no one, the sustainable management of water resources as the responsibility of all.” With this aspirational definition of “public,” decision making models that are participatory, transparent and in the interest of all are favored and within such a commons-based system, water services are provided on a not-for-profit basis. This alternative vision for improving the water sector and the case studies offered by PAPC share some basic characteristics, such as the recognition that water is a fundamental human right and it should be managed as being part of the commons.

The third section is background on public financing. It is intended to counter the myths propagated by the proponents of private financing, which suggest that privatization is the most effective way both to address the crisis in public water financing and to ensure universal access to drinking water and sanitation.

Despite growing evidence that the privatization of water and sanitation services has failed communities, proponents of the model often cite the lack of public funding as a reason to continue to bring in private investors. Evidence based arguments suggest that this is far from the reality, especially in the case of water services sector, and suggest that the discrepancy is because the “framework used by donors and international institutions [is] sharply different from the reality of water and sanitation services in developing countries” where public finance accounts for most of the new investments in water supply and sanitation sector.

This section on public financing not only points out that the private investors often must be lured with policies that protect their profits, particularly in markets that are deemed risky, but also points to other possible pitfalls that a water utility entering into an international investments agreement needs to be aware of, such as any relevant investment treaties that would make this a binding contract. Most importantly, it builds on the argument that it is more viable for a utility or a country to opt for public financing. It further offers a number of ways in which public financing can be mobilized.

While recognizing that the public sector isn’t always perfect—there are many poorly performing public utilities around the world—this section points out that by eliminating the profit motive, public financing offers the potential for local govern­ments to reinvest in the system to better serve the needs of communities and the environment. However, community engagement and vibrant democracy is essential for participatory and accountable systems that serve the needs of communities. Only these will ensure that mechanisms are set up to effectively involve water users in decision-making, as positive experiences from Paris, France and negative experience from Flint, USA show.