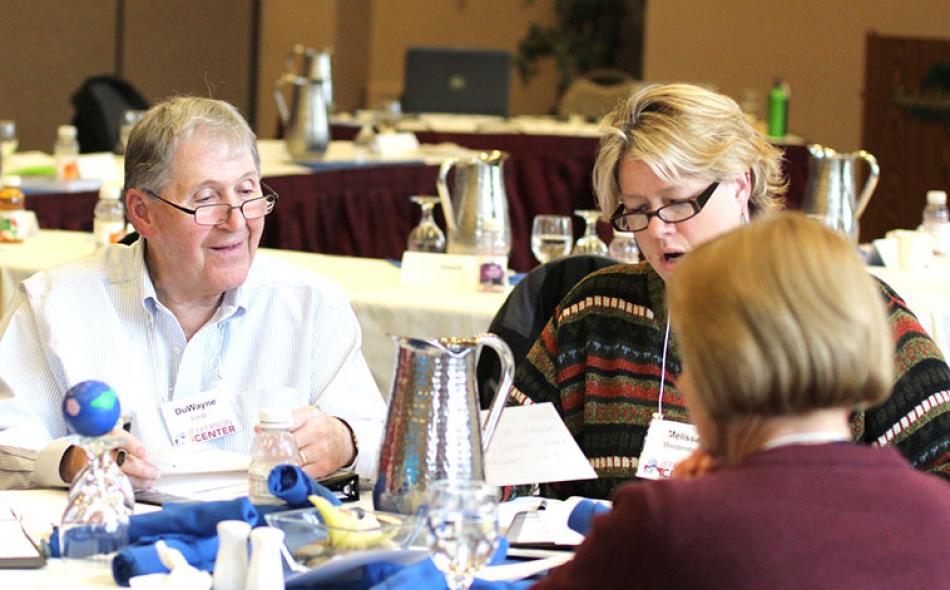 In early March, farmers and rural residents of southeast Minnesota gathered for three intensive days of presentations, discussion and deliberation around the thorny issue of climate change. The Winona, Minnesota Climate Dialogue participants, most of them in shirts and jeans, were a blend of ages, cultural backgrounds and jobs. Some had lived in the community their whole lives, while others had moved to the area recently. All said they loved where they lived and cared about its natural beauty—ideally positioned where fertile farmland meets the deeply carved Mississippi River Valley. But, all certainly did not come to the table with any shared view of climate change or common political perspective.

There is a common misconception that you can’t talk about climate change in rural communities because the issue is considered too polarizing. Many would likely wage a bet that a climate discussion would paralyze Winona residents, divide them, and lead to more finger pointing than hand holding. But not here.  Despite their differing viewpoints, the 18 participants in the Winona County Climate Dialogue produced a collective statement and action plan, crafted solely using participant input, based on six topical presentations from local experts on weather trends, energy use, water, insurance, public health and agriculture in Winona County.

The Winona plan acknowledged that climate change “will have a real measurable impact on our overall economy, our environment, fish and wildlife habitat, health, insurance rates and more. Individually and as Winona County” they deemed that “they needed to take action by working together to prepare for the future.” Better land and runoff management practices were identified as a top need for farmers, who work about 44 percent of Winona County’s total land area. Recognizing that urban and rural areas need to support each other, both financially and socially, support for farmers in adopting new climate resilient practices was identified as a priority action.

Some may ask, what’s the big deal? Well, when you look at what’s at stake for our country, and farmers and rural communities in particular, in the face of climate change and how our increasingly polarized democracy seems unable to respond to the climate challenge—this is a big deal.

The rural landscape is comprised of forests, farms and rangelands that can capture carbon when managed appropriately; land and resources for wind, solar and other renewable installations; and most importantly, people and ingenuity to implement the transition to a low carbon economy. While only 15 percent of U.S. residents live in nonmetropolitan counties, these counties account for 72 percent of the nation’s land area, and, by extension, represent most of the nation’s energy production. Despite this fact, rural communities including farmers have often been overlooked in climate conversations; political debate and policy changes have tended to emphasize urban and suburban perspectives.

Thus far in the rural context, we have seen a failed approach that has separated climate policy from other community concerns.  Proposed carbon reduction strategies like the Clean Power Plan are often viewed as stand-alone initiatives that don’t contribute to improved quality of life but actually increase economic inequities and costs for rural citizens. Worse, input from rural communities on climate policy like the Clean Power Plan is often an afterthought. For rural residents, who earn less, are more food insecure and have higher energy costs on average than their urban counterparts, such policies are not attractive.

There are, of course, real challenges to engaging rural communities on climate policy—and longstanding political obstacles that run much deeper than climate change. Of all the growing divides in our country, none is sharper than that between urban and rural lives. The divide between rural and urban is not just geographic, but more imperatively cultural, economic and political, and here in Minnesota the gap is widening. Furthermore, this divide plays out on both a macro level—between the heartland of the Midwest and the megacities of the east coast—and on micro levels—with discordant concerns, demands and needs between county residents and small town dwellers. City and rural are not equals by any demographic, political or cultural measure. Urban areas are growing and prominent; rural populations are shrinking and becoming increasingly culturally less relevant. The nation’s urbanites increasingly govern those living in the hinterlands, even as rural Americans still feed and fuel the nation.

The failure to effectively engage rural communities on climate change has severely limited our collective (rural and urban) ability to address the biggest challenge of our time. The unfortunate reality pointing to the urgent need for a new approach is that the Obama administration has had to entirely avoid Congress to enact the Clean Power Plan and negotiate at the United Nations level. The strategy of ignoring those obstacles, or trying to ram through them, has thus far delayed action on climate change. Instead, we badly need a new approach to rural engagement on climate change.

To get past politics and toward solutions we must first recognize that rural politics are uniquely personal. It’s a much more private experience to share your political beliefs with the people you see in Sunday service or at the cafe every week. For rural residents, existential issues on the national level are often seen in the same way as personal, physical considerations—A Clean Energy Economy: will the country turn its back on my community of coal miners? For the farmer who is not convinced that his water-logged crops will recover or the trucker worried that his road will get washed out, convention is preferable to change and experimentation. An inclusive national climate policy requires an approach that reduces risks (associated with climate change and other problems) while increasing opportunities for better livelihoods.

For the last year and a half, IATP and the Jefferson Center have organized a series of Rural Climate Dialogues (RCDs). The Dialogues are an effort to identify policy recommendations and direct action ideas developed through multi-day democratic deliberation, high school student contributions, community organizing and urban-rural technical assistance and advocacy partnerships to address the effects of climate change in rural communities. The RCDs use the innovative and time-tested Citizens Jury method for community problem solving and leadership development.

Each Dialogue gathers a randomly selected but demographically balanced group of citizens in a specific rural community for an intense, three-day moderated study and deliberation forum on local climate change impacts. In Winona County, that meant half men, half women. Five Democrats, five Republicans, and eight with no party affiliation. Sixteen white and two people of color. Ten from the city of Winona and eight from the county. Eleven worried about climate change and seven not worried. Ages and education levels were also balanced.

The participants are tasked with creating a shared, community-based response to changing weather conditions and extreme weather events. The conversations are completely citizen-driven; no one tells them what to think. The participants have the liberty, information and resources to produce their own recommendations that respond to community needs, priorities, concerns and values.

The Winona Rural Climate Dialogue does not stand alone. As the third in a series of RCD’s across the state, the Winona Dialogue confirms a shared concern for more responsible land use broadly, emphasizing the need for greater community support for farmers, who face agronomical, economic and social challenges as they transition to a more resilient, diverse agricultural system. There was a recognition by all RCD communities to take greater personal responsibility, but also an acknowledgment that some people in the community would be affected more dramatically in the face of changing weather. For example, people on fixed incomes would have to pay a higher percentage toward cooling their homes, given rising energy costs and participants identified that public decision making needed to take these inequities into account.

Later this year, a state convening will bring together the shared concerns, unique needs and the amplified agency found among all three Rural Climate Dialogues to engage policymakers, administration and agency staff in an effort to create stronger climate policies in the state, the region and the nation.

The dialogue process is far more than an exercise in community decision making; it’s the opportunity to rebuild democracy. Democracy requires informed citizens. Without positive, pro-rural voices or proposals on the table, climate change deniers have been able to focus on the additional burdens that new regulation or taxation would bring to rural America while ignoring all of the ways in which climate change itself will negatively impact rural America—and the opportunities for economic development in a new, clean energy economy.

Climate change can make people feel powerless. Therefore, democracy in action requires more than an informed citizenship. People also need to have agency—the feeling and actual power to do something about the problem, not just individually, but as a collective.

The Rural Climate Dialogue process is three-fold: through peer to peer collaboration it enables us to understand the climate challenge for the community; it builds an amplified on-the-ground network of cooperation to implement both policy and non-policy solutions; and then it reforms the political process so that our leaders (and the policies they pass) are influenced and include a more diverse network of citizens.

Conventional political thinking is that "climate" is too politically charged to discuss in rural America. The reality is that rural citizens are dealing with the challenges of extreme weather directly and are interested in being part of community and political solutions. Rural opposition to effective climate policy is not inevitable, and can be overcome by genuinely engaging rural residents in climate solutions. Most importantly, all communities, rural and urban, will benefit from supporting rural people and farmers in the transition to clean energy. But in the process we must capitalize on the opportunity to bridge a growing divide between urban and rural, in a manner that deliberately rebuilds democracy.

An abbreviated version of this blog originally appeared on the Farm Aid blog on April 29, 2016.