Drought in my life 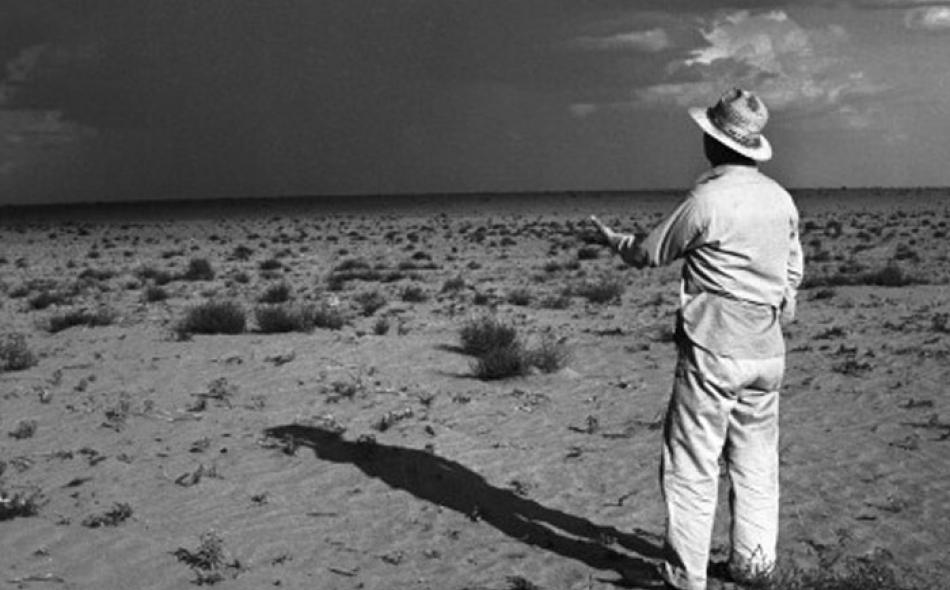 I am a product of small farm Midwest U.S. agriculture. Weather has been a major part of my life—as is the case with any farm family. Declaring disaster areas and offering emergency loans by a benevolent government might make folks feel better but will never replace the stress that comes with widespread, insidious devastating drought. You find this stress in ancient writing, such as Egypt’s seven-year drought, and you find it today as cattle producers sell off their livelihoods because they cannot afford the hay to keep the cattle alive.

I have experienced this stress firsthand. I spent my first five years on a southern Iowa farm, where making a living even during good times was very difficult, and even worse during drought. In 1937, when I was born, Iowa was still reeling from the great drought of the mid-1930s that brought the dust bowl further west. My father used to say that my hospital and doctors costs were paid for with a promissory note on his only good field of corn. He probably did not embellish too much, but then corn was of such little value that many farmers could not afford to even harvest what little crop they had.

The family moved north to better soils. World War II provided strong demand and weather was perfect for corn and hay production. Soybeans came into the crop mix. Life was good: loans were paid off, new tractors became available when the industrial power of the nation went back to making machines of peace rather than of war. But as always happens, farmers were not able to stop overproducing and crop prices plummeted. To help out, the federal government under President Truman established the ”ever-normal granary.” They helped purchase grain bins and paid storage costs for corn that had been placed under loan. When the corn was sold, the government covered costs if at a loss, you kept the profits if corn was sold at a gain. This system today would stabilize farm income, grain prices and food prices worldwide, but the policy was abandoned for the freedom to farm or fail policy in the 90s.

I relate this history because this system of reserves helped make the 1950s and 1988 drought less stressful. Still, both were nasty. In 1950s the drought started, as is the case today, in the southwest U.S. and spread north and east. It went on for five years, decimating Texas and Kansas. During 1953–57, drought plagued the Great Plains including Iowa. It hit our farm near Des Moines especially in 1954: I recall grinding corn cobs and covering them with molasses to provide some roughage and protein to the dairy cows but production still dropped precipitously and we had to sell off the beef and some of the dairy. I managed to keep my 4-H dairy heifer. Very little hay was to be had and the corn turned white by July and we cut what was left for silage, hoping we did not get forage high in nitrate. Fortunately, Dad had planted some grain sorghum and sorghum-sudan grass which gave some grain and forage. Corn in the granary went to feed the cattle, costing the farm precious cash receipts. After that year I have always loved the rain, even when too much caused flooding, anything was better than the drought. I always scanned the skies then, hoping the next cloud brought relief.

For many Iowa farmers, including my dad and mother, that drought began a long slide toward the loss of the farm. It was not resilient enough, even with the good years. The debt load and the other shocks of 1954 were too much and it was eventually sold. This pattern was repeated though out the Midwest. Should the government have stepped in with loans and other forms of support? Would it have made a difference, or were these farms slated to be taken over by larger farms regardless?

The widespread persistent drought of 1988 rivaled the earlier droughts and moved further east. In 1988 I came back to Iowa to direct the Leopold Center. The countryside was eerily similar to my 1954 experience, but I was insulated from the effects by my secure state-funded position. Again this drought created stress and led to the loss of smaller, less resilient farms. However, the economic costs of the drought were lessened because the country had relatively large grain reserves.

Today, yet another widespread drought threatens farmers and ranchers. Again it started west of Great Plains and Midwest. This drought is now in its second year, and has already become one of the nation’s worst. How long will it last? And do we finally know enough about what causes these extreme weather events to at least predict after the fact what happened? Since we have no grain reserves, prices are at the whim of markets and speculators.

What we do know is that drought brings huge demands on the resiliency of farmers and ranchers. Several states recognize this and have responded with excellent websites and hotlines that can help. Minnesota’s page, for example, is a great resource for the state and the region.

It’s becoming clear that Midwest row-crop and animal agriculture cannot rely on a dysfunctional federal government for long-term relief during persistent droughts. Building resiliency, to be able to withstand drought, floods, market downturns and diseases and return to productivity is a must.

I will explore resilience as I move along in this drought series. I know it is a tall order, but we just have to try.