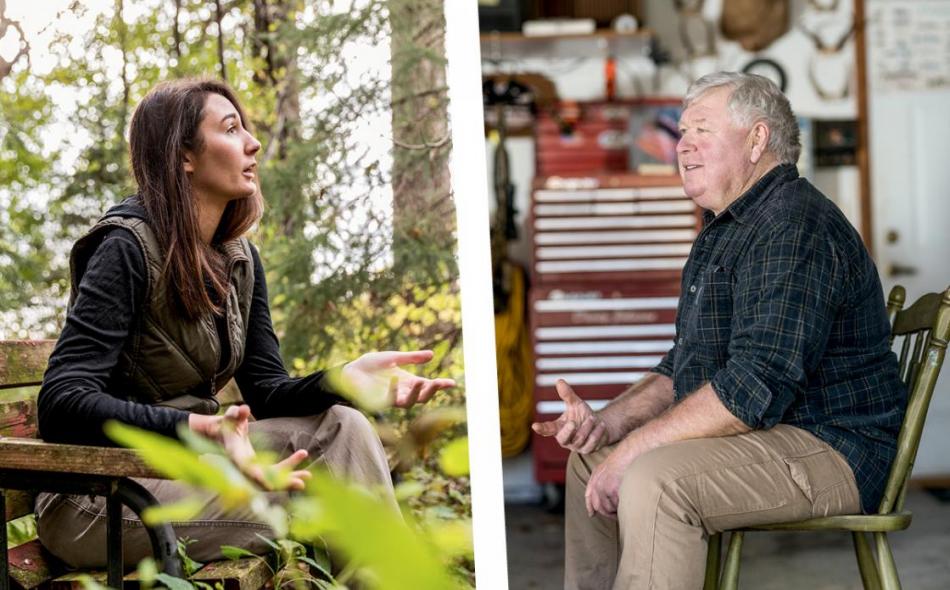 The following was published by Sierra on December 14, 2017, under the title Talking About Climate Change in Trump Country.

FOR 47 YEARS, HARVEY KRAGE LIVED IN a white farmhouse with red shutters on the side of a bluff about 11 miles from the Mississippi River in southeastern Minnesota. He and his family kept ducks in a pair of ponds and drank water from the springhouse in their backyard. For three decades, Krage commuted from the farm through a woodland of red cedar and black maple, past corn and bean fields, to the small city of Winona, where he retreaded massive, heavy construction tires for Goodyear Tire & Rubber Company. Then for another decade, he drove the company's semitrailers, passing the long hours with talk radio, especially the diatribes of right-wing commentator Rush Limbaugh. That's how he first heard about climate change, "about how crazy these scientists were."

As the years went on, the rains came heavier and more often. But his opinion about climate change didn't budge—not even when floods tore through his region in 2007 and about 18 inches of rain drenched his place in just three days. Two and a half feet of water slopped into his basement and lifted his freezer off the floor. In the nearby town of Rushford, every downtown building was trashed with mud. A city councilor there told the Associated Press it was "our Katrina." The Minnesota governor declared a state of emergency.

Over the years, the summer heat became increasingly unbearable, but the rising temperatures didn't spur Krage to change his views about global warming. In 2011, parts of Minnesota broke records for high dew points. The temperature in Winona swelled to 93°F, but it was so muggy that the official heat index put the temperature at 114°. Nor did he think much about climate change in 2013, when another big rain caused mudslides throughout the county. Krage found himself arguing about it with his more liberal adult daughter. "Global warming," he said, "to me, it was a farce."

Then in early 2016, two years after Krage retired, a postcard appeared in his mailbox: an advertisement for a three-day event called the Rural Climate Dialogues. The gathering was sponsored by the Institute for Agriculture and Trade Policy (IATP), a think tank focused on farm policy, and the Jefferson Center, an organization that specializes in facilitating political discussions. The event was by invitation only, and one had to apply to participate. If chosen, Krage would join "a randomly selected, demographically diverse microcosm of Winona County." He remembered thinking, "Hey, why not?" And so Krage was one of a few hundred who turned in an application with basic information, including age (72 at the time), party affiliation (Republican), race (white), and education level (high school diploma).

Click here to read the rest of the article.