The Role of the Land Sector in Ambitious Climate Action 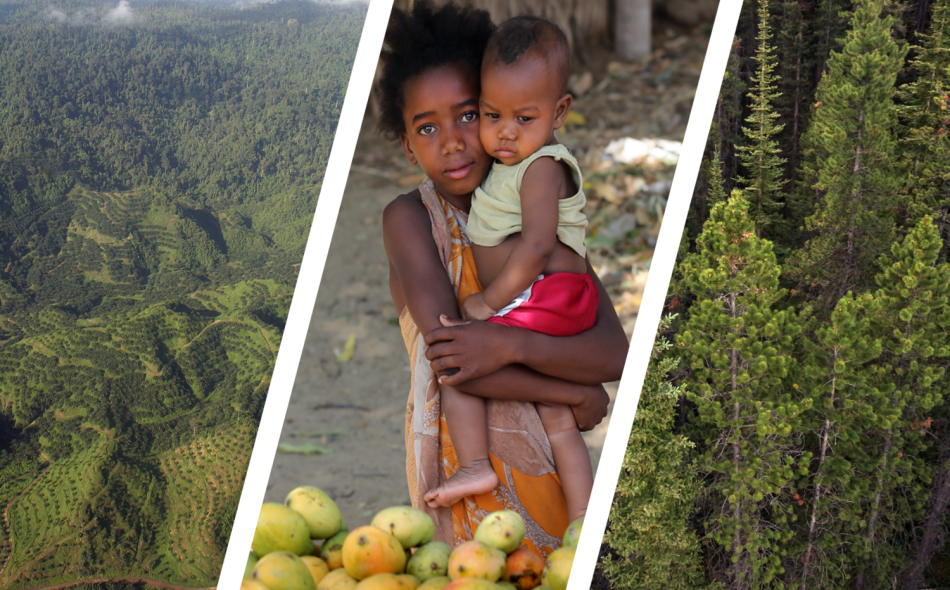 This report provides an alternate response to the UN Framework Convention on Climate Change’s request to the IPCC to analyse impacts of warming to 1.5°C and related greenhouse gas emission pathways. Prepared by representatives of the Climate Land Ambition and Rights Alliance (CLARA), a consortium of advocates, faith-based organizations and scientists concerned with climate mitigation and adaptation, the report responds specifically to the concern that many IPCC pathways rely heavily on untested mitigation approaches such as bioenergy with carbon capture and storage (BECCS). CLARA supports the IPCC’s objective of strengthening the global response to the threat of climate change while meeting sustainable development goals and reducing poverty.

In other words this report asks: What level of climate ambition can be based on approaches that are already available, and that safeguard food security and food sovereignty, land rights, and biodiversity?

Emphasizing climate solutions that put the needs of people and planet first, especially the role that forests and improved agricultural practices can play, this report proposes a series of tactical approaches and quantified carbon sequestration goals to address the intertwined crises of climate change and global biodiversity loss.

A large portion of the remaining global forest estate is in the hands of indigenous peoples and local communities. However, while half of the world’s land is associated with a ‘customary land use’ claim, only 10% is legally under indigenous and community ownership. Securing community land rights represents an effective, efficient and equitable climate action that governments can undertake to protect the world’s forests. Protecting forests while allowing for indigenous and community-based forest management to provide biodiversity, food security, and carbon sequestration benefits is an urgent first step in ending deforestation and restoring forests’ historical role as net forest ‘sink’.

In many areas, indigenous peoples and local communities are standing up to threats from commodity agriculture and mining. ‘Avoided deforestation’ is recognized in the scientific literature as one of the lowest-cost approaches to mitigation, but solutions based on recognizing community land rights while extending indigenous management of degraded forests remain undervalued (Figure 1). 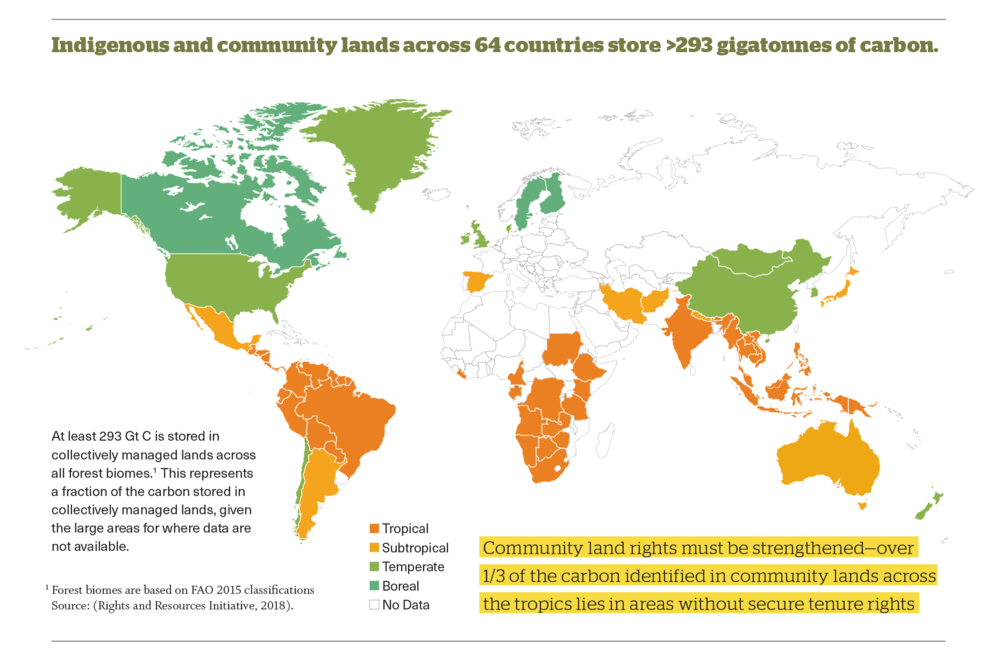 Part 2: Restoring Forests and Other Ecosystems

The report quantifies the carbon mitigation potential of returning half the world’s forests to an undisturbed state, which, along with expanding natural forests, builds ecosystem resilience. Figure 2 stacks these different restoration ‘wedges’ to estimate annual and total forest-restoration carbon sequestration and avoided-emissions potential.

Forest Ecosystem Restoration. Protecting half of the planet’s natural ecosystems would help preserve biodiversity and maintain ecological integrity. Setting aside one-quarter of degraded natural forest cover globally (600 million hectares) would advance this goal. Successful restoration and subsequent protection of these forests would restore primary forest characteristics, increasing the area of primary forests to 50% of the global forest area.

Natural forest expansion. The regeneration and expansion of natural forest cover is critical to replace lost forest area and increase carbon uptake. Forest regeneration congruent with the “Bonn Challenge” goal would require restoring 350 million hectares by 2030. Natural or assisted regeneration of native forests is the most effective intervention from climate and biodiversity perspectives, therefore this analysis distinguishes these strategies from the planting of monoculture tree plantations, which have poor carbon sequestration rates and high risks of reversal. Expanding forest cover as a buffer around remaining primary forests is critical to the strategy of restoring and expanding the global cover of intact primary forests.

Responsible use of forests. Improved management of forests for timber, non-timber forest products, and ecological values is crucial for enhanced carbon sequestration. While allowing full recovery to primary forest of secondary natural forests is the best climate mitigation pathway, lengthening rotation times and reducing harvest rates can produce significant increases in forest carbon stocks and biodiversity in temperate and boreal production forests. In tropical forests, responsible use means no commercial extraction of timber, given that over 50% of biomass in these forests resides in valuable hardwood trees that take centuries to regrow. Commercial wood production should be sourced primarily from improved plantations. Wood production needs to be reduced, made more efficient, and wood utilization should move to longer-lived products. Increased use of forest biomass for energy generation increases net carbon emissions over the next several decades and is thus incompatible with improved management that enhances forest carbon sequestration.

This report uses an agro-ecological frame to characterize climate ambition in agriculture, describing a variety of mutually-reinforcing changes in agriculture production and consumption. Agroecology is used here in its holistic sense, as an alternative to industrial farming. Net emissions from agriculture need to be reduced or eliminated by changes to the production and use of synthetic fertilizers and changes to rice cultivation practices that reduce methane emissions. In bioregions where agroforestry is possible, the introduction of perennial species, orchard crops, and other mixed-use systems can also lead to large per-acre increases in carbon stocks. Meat and dairy production should be integrated at the landscape level, and should promote increased agro-biological diversity of cropping and livestock systems.

In light of population pressures, there is danger that ‘sustainable intensification’ may just increase reliance on industrial farming models that deepen inequality and erode stores of natural capital, contrary to agro-ecological approaches. On the production side, assisting smallholders to adapt to climate change is the most urgent priority that addresses both food security and leads to a transformative pathway for agriculture. Other mitigation gains in agriculture can also come on the demand side through food system and diet change.

See Figure 3 for a summary of agriculture sector emissions reductions from a projected baseline of 11 Gt CO2eq per year in 2050. Agroecology. Quantification of mitigation opportunities is most challenging for this sector. However, re-orienting food production and improving diets through agroecology provides critical health, livelihood, resilience, and food culture benefits that are generally not well represented in discussions of the climate response in agriculture.

Less and better livestock production. Changing the way that animal products (meat and dairy) are produced and consumed provides a large mitigation opportunity. An ‘ecological left-overs approach’ that limits feed production and relies on natural grasslands and food waste to feed livestock also means reducing the total number of livestock, and thus the amount of meat and dairy products consumed. These changes could reduce GHG emissions by 4.5 GtCO2eq per year.

Healthy diets: The land intensity of agriculture can be further reduced by bringing consumption into line with healthy-diet recommendations, such as those from the World Health Organization. Limiting consumption of meat, dairy and overall calorie intake to healthy levels globally (which requires significant dietary changes in rich, developed countries) significantly reduces emissions and releases arable land for food-system change or restoration. Healthy diets could reduce GHG emissions by a further 2.5 GtCO2eq per year from baseline projections in 2050.

Transform food systems. A range of other ‘demand side’ measures, such as reduced food loss and waste, reduced food miles travelled, and reduced use of fossil-fuel-heated greenhouses to artificially extend growing seasons could reduce emissions by a further 0.5 GtCO2e per year.

Agroforestry: As one of the most important agroecological approaches, tree biomass on farms represents an important ‘missing pathway.’ Using conservative assumptions, agroforestry approaches could sequester 1.04 GtCO2/year in above ground carbon across 300 Mha of agricultural land.

Conclusions: Towards a holistic response to climate change

The report shows how major shifts in land use and land management represent ‘missing pathways’ toward the 1.5°C temperature limit goal, that reduce or eliminate the need for reliance on geoengineering approaches such as BECCS. Figure 4 quantifies avoided emissions and mitigation gains that could be achieved from rights, restoration, agroecological, and food-system pathways outlined in the report. 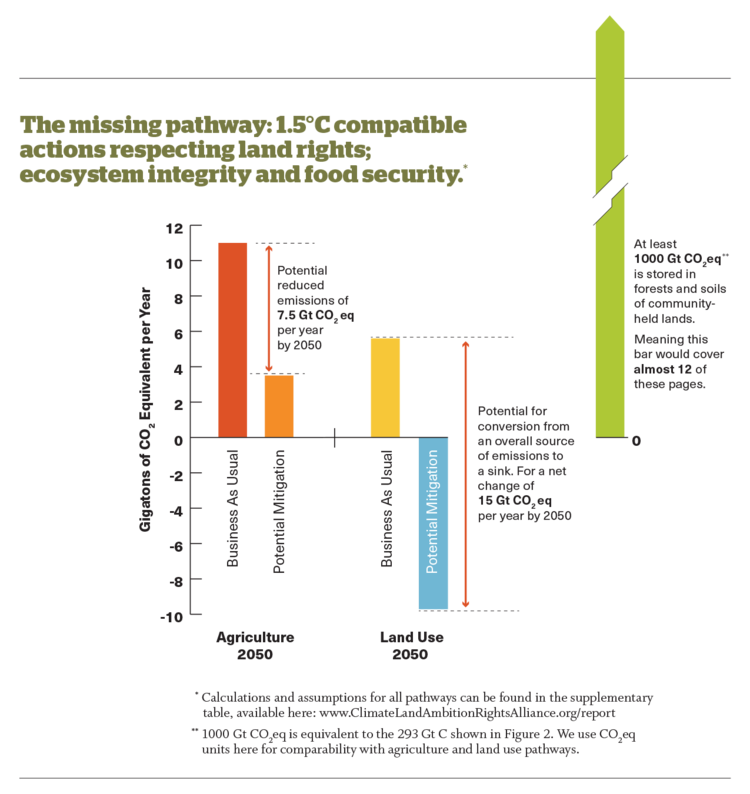 The main conclusions of the report are: 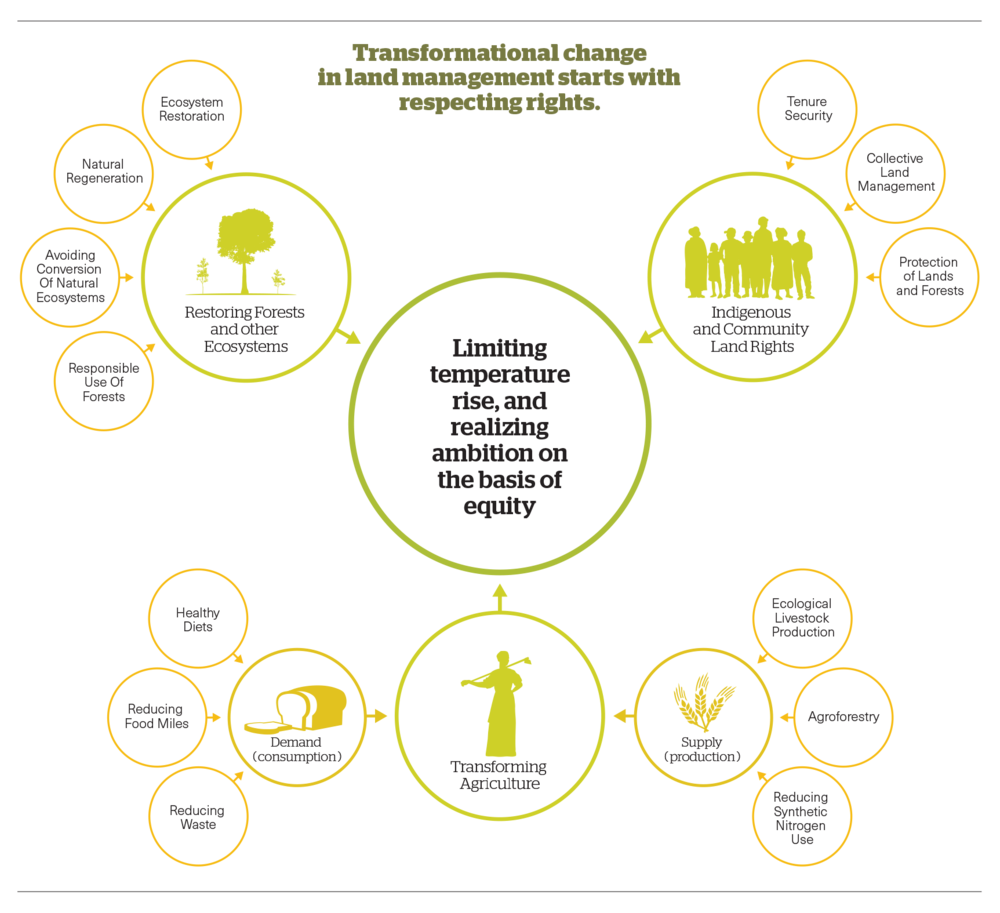