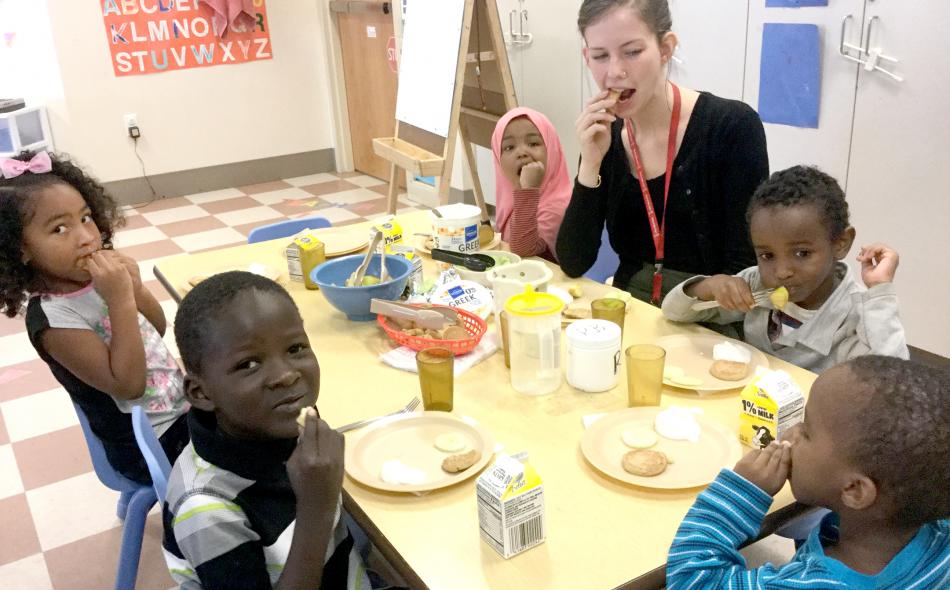 When Haley Miskowiec first started as the Nutrition Services Coordinator at the Reach Up Head Start Program in 2015, she was eager to help the children she served develop positive eating habits. She had the opportunity to connect her passion for childhood nutrition with her interest in local foods when she partnered with the Institute for Agriculture and Trade Policy (IATP) in the fall of 2016 to launch a Farm to Head Start initiative. As a registered dietitian, Haley saw the benefits of Farm to Head Start. Teaching children where their food comes from and giving them multiple opportunities to interact with new foods increases the likelihood that they will try those foods. Establishing healthy eating habits early in life is critical, especially as children become older and can make their own decisions about what to eat. 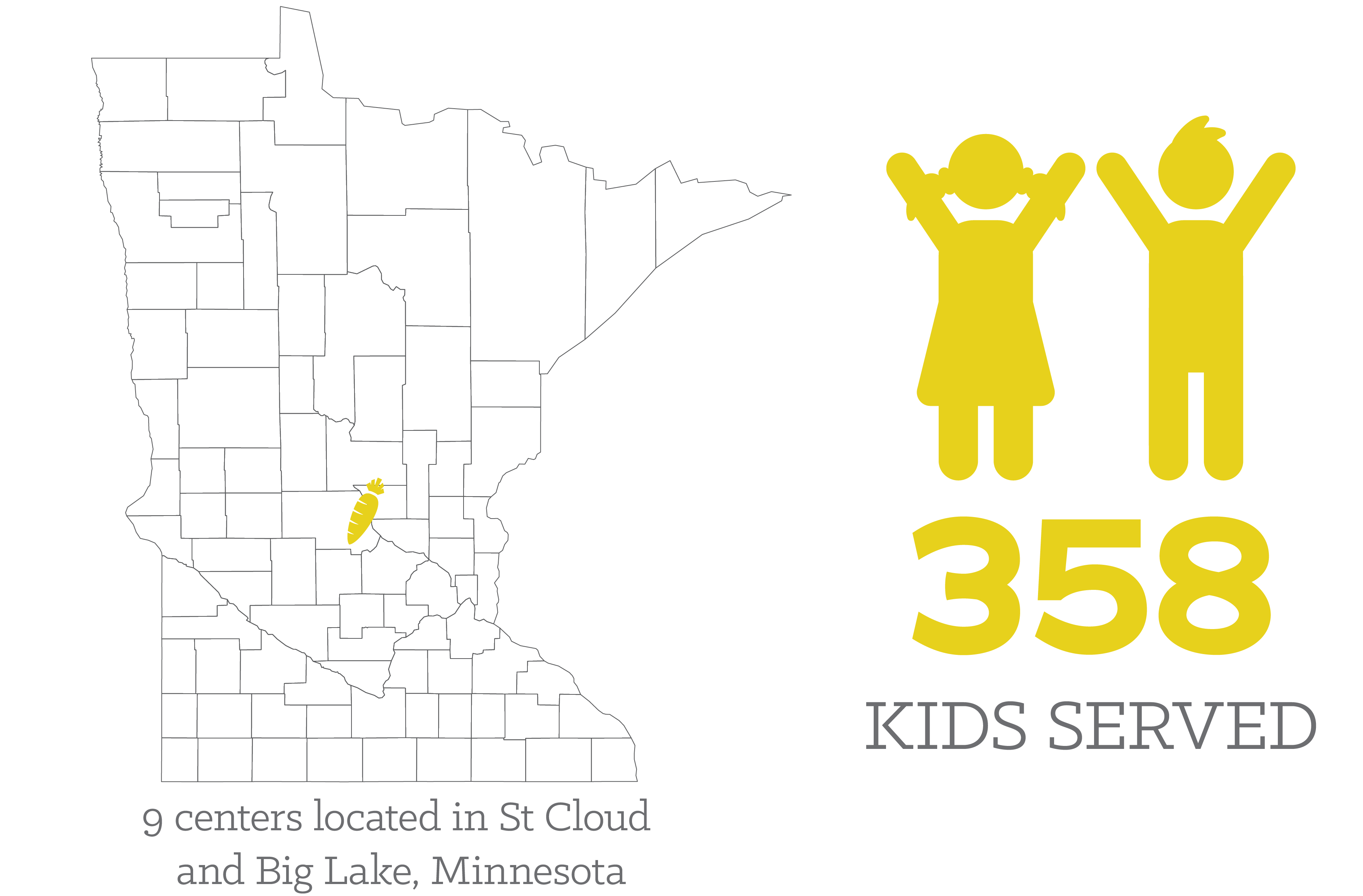 Support of the initiative at all levels

While Haley was primarily responsible for planning and executing the Farm to Head Start initiative, it was the support from her organization’s leadership that allowed her to move forward. Reach Up’s internal structure and culture gave Haley the freedom and autonomy to make decisions about how to run the program. Haley acted as an internal champion and had the authority to make purchasing decisions, schedule staff trainings, plan parent events and outreach, and schedule field trips in partnership with other staff on Reach Up’s Farm to Head Start Leadership Team.

Haley had anticipated that launching Farm to Head Start might be a challenge, but she believed in its benefits for Reach Up’s children, families and community. Her first step was to develop buy-in for the initiative among key staff, particularly in foodservice and education. New programs may be met with resistance if stakeholders view them as an added burden and do not recognize their benefits. Haley understood the importance of sharing her passion for Farm to Head Start and developing support among staff at all levels to the long-term sustainability and success of the initiative. 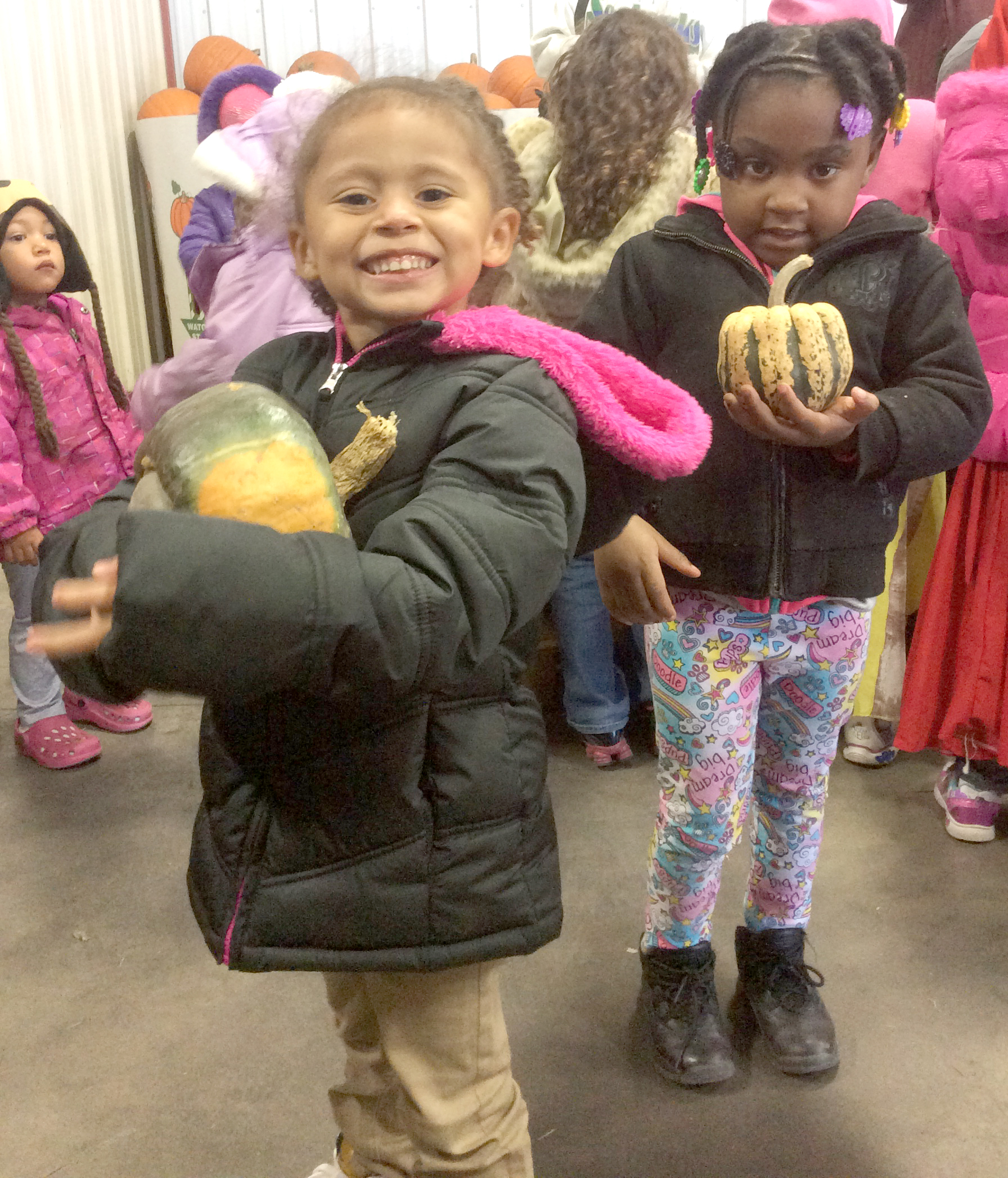 Haley made a concerted effort to ensure the kitchen staff understood the goals of Farm to Head Start and the critical role they play. Developing a sense of ownership among the kitchen staff directly contributed to the success of Reach Up’s Farm to Head Start initiative. Throughout the pilot year, Haley saw firsthand the importance of listening to and supporting the food service staff in their process of incorporating local foods.

St Cloud’s Farm to Head Start initiative started small its first year to allow the staff to adjust to how the food came from the farm (whole, sometimes with a little dirt) versus from the distributor (processed and ready to cook). “By focusing on just the produce, we were able to get the kitchen staff very comfortable with how the food came from the farm so that it didn’t overwhelm them, and we didn’t overdo it,” Haley said.

Haley learned when the food service staff were having trouble with a certain food item, it was vital to support them in figuring out how to make the process smoother. For example, if a certain fruit or vegetable was particularly time-consuming to prepare, Haley and the staff talked about what could be done differently or if additional equipment could help.

You have to have staff who are willing to figure it out. And you have to support the staff when they are figuring it out. Let them know it’s ok if the food isn’t A++ every time. It happens.

Since the initiative’s debut, Haley has observed a growing sense of confidence among Reach Up’s food service staff. “The kitchen staff got more comfortable working with whole foods throughout the program—they started to request ordering extra product to use in other ways outside of the main recipe,” she said. “They started seeing more ways to use the product.” The staff agreed, adding, “We definitely feel more equipped to keep going with the program now. It was the fear of the unknown that made it challenging.”

Teachers and education staff played an equally important role in Farm to Head Start, as they led the children in experiential food- and farming-themed classroom activities. For teachers, Haley took the same approach as with the kitchen staff: Train on Farm to Head Start basics and focus on gaining authentic input and support for the initiative.

One of the things we’ve learned and have switched to a priority is training staff and getting them to be more adventurous in their eating as well. What we see is that we can focus a lot of the things on the kids, but we have to have the teachers on board. So we have to break down their walls to try new foods and things they are not familiar with, so they can encourage the kids to do the same in a classroom setting.

It was important that teachers could easily incorporate food- and farming-themed activities into their daily routines. Reach Up’s existing curriculum, Teaching Strategies, already included a Farm to Early Care component which let teachers streamline it into part of the regular curriculum. 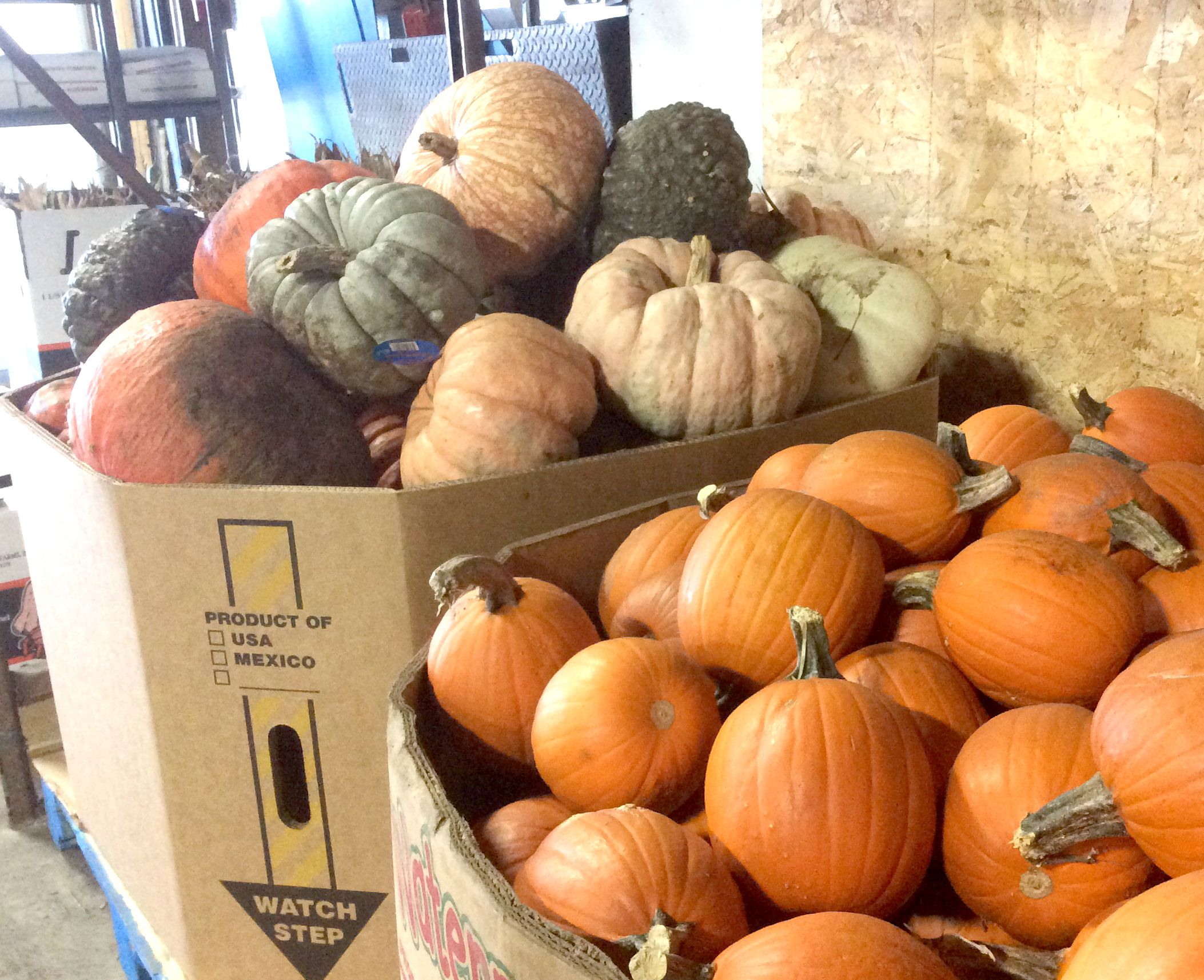 One of the core principles of the Farm to Head Start model is incorporating local foods into children’s meals and snacks. Because there is no single, standardized definition of the word “local,” each Head Start partner decides what that term means to them. Taking advantage of central Minnesota’s abundant food growers, Haley decided to purchase items only from farms within the three counties served by her program: Stearns, Sherburne and Benton. While identifying farmer partners in her area was not difficult, meeting their delivery thresholds was. Because one of her primary goals in launching a Farm to Head Start initiative was developing personal relationships with local growers, Haley decided to drive to the farms and pick up the food herself. She said the biggest challenge with this method was actually getting ahold of farmers who were often out in the fields. By going to the farms and meeting with farmers each week, Haley built strong working relationships with them. She says the direct contact with growers the first year was at the heart of the community building essential to her goals for the Farm to Head Start initiative. “We’ve been able to do multiple other things with them,” she said. A field trip to Stoney Brook Farms in Foley was one of the most popular family engagement events of the year. Not only did the children get to experience a farm for the first time, but it was also the first opportunity for many staff and families to visit a farm, too.

Since the pilot year of 2016, Haley has adjusted her local purchasing strategy, still sourcing mostly from the same farms, but now ordering through food hubs and vendors that can deliver to the Head Start center. While it was ultimately not feasible for her to continue picking up fresh produce each week, Haley was surprised to find that purchasing directly from the farmer gave her a lower price than purchasing the same item—even grown at the same farm—from the distributor, due to the mark ups of processing, storage and delivery. Haley now chooses which local foods to put on the menu based on what is available from the vendors and strategically designs the menu to build enthusiasm among students. The school year begins with a familiar local item—the excitement over sweet corn is contagious—gradually builds to more unfamiliar produce, such as squash and radishes, and finishes with another already well-liked item. This strategy has been successful because the kids wrap up the school year having a positive experience with local produce.

Reach Up’s family engagement includes parenting skills and nutrition education classes for families, including a segment on how dads influence kids’ eating habits in their “Stronger Fathers” course. Haley does recipe demonstrations and taste tests with the parents and is available for one-on-one meetings or to take parents on grocery store tours. In addition to more structured events, parents are always welcome to participate in maintaining the center’s garden.

Reach Up does cooking demonstration activities for families using local ingredients and shares the recipes to recreate at home. 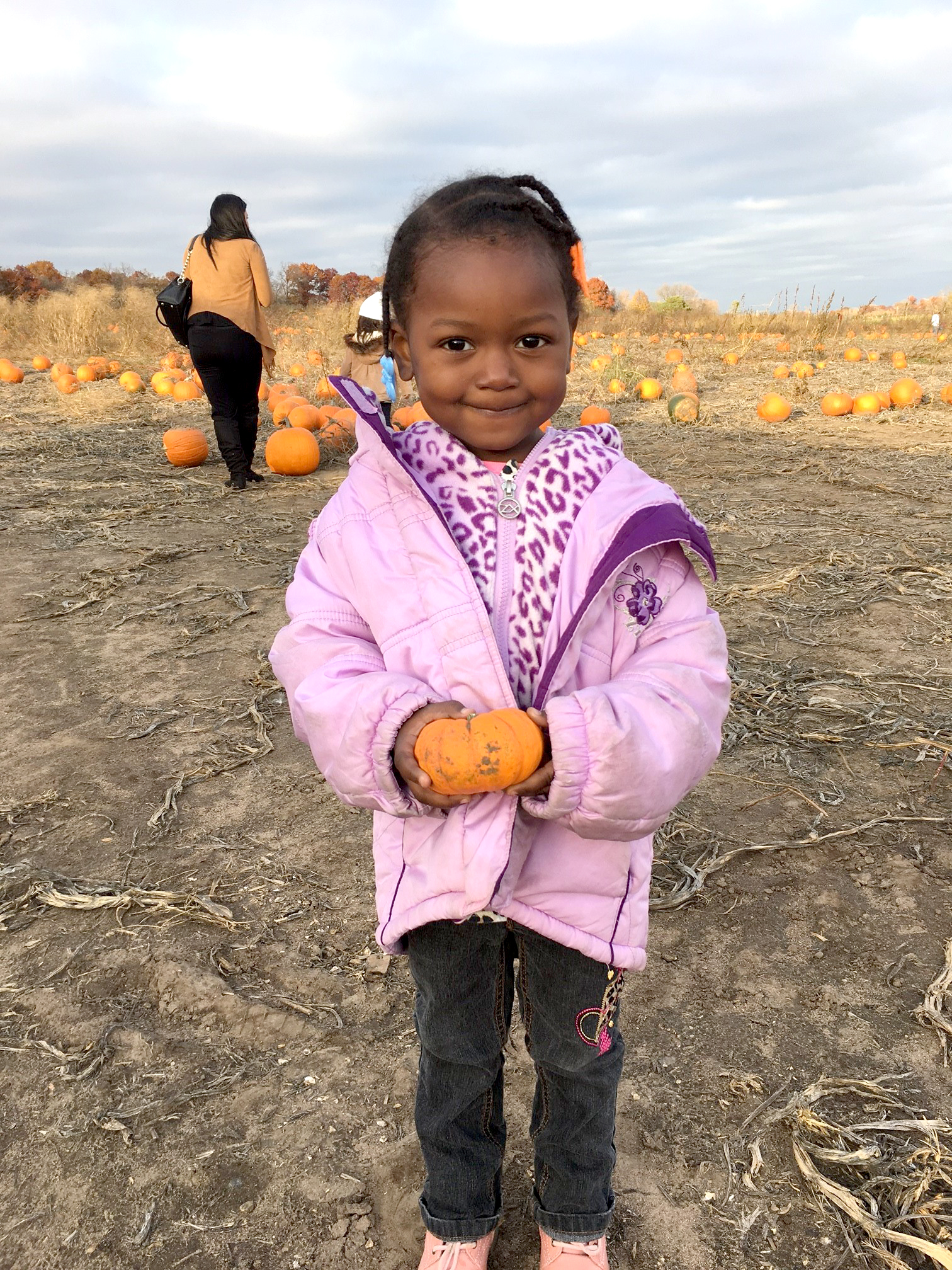 In its pilot year in 2016, Reach Up’s Farm to Head Start initiative served 14,532 servings of local produce, and it has steadily gained momentum since then, informed by Haley’s continued goal of improving and streamlining her methods. Haley herself has become an active member of the Minnesota Farm to Early Care Coalition, and has enjoyed sharing what she has learned with peers around the state.

For other Head Start programs looking to start or expand their own Farm to Head Start initiative, she recommends forming a Farm to Head Start Leadership Team to create an overall vision (for example, how will “local” be defined?) and to share the workload. She adds it’s important to remember to start small, to leave lots of room for flexibility and to add new elements as staff become more comfortable. After the initial year of Farm to Head Start, Reach Up focused on strengthening its gardens. Once these components of their program are strong, they hope to expand Farm to Head Start into their home-based programs. “If we’re not ready for it this year, that’s ok, we’ll do it next year,” said Haley.

Many thanks to Haley Miskowiec, the teachers, administration and food service staff at Reach Up Head Start, local farmer partners and all others who contributed to the success of this Farm to Head Start initiative!

Funding for this project is provided in part by the Center for Prevention at Blue Cross and Blue Shield of Minnesota and the Minnesota Department of Agriculture.

Read the other six case studies.