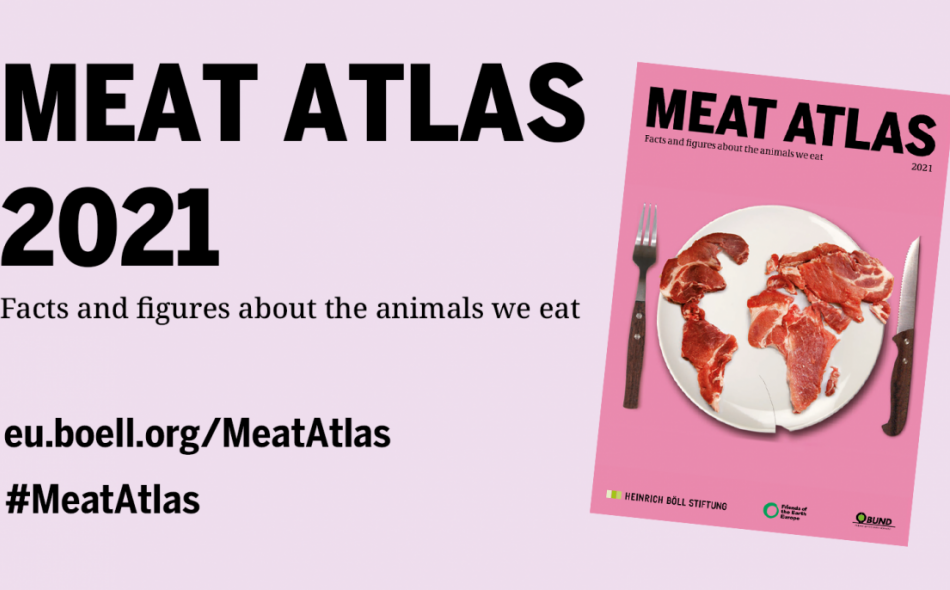 Public launch of the Meat Atlas 2021

The Heinrich-Böll-Stiftung and Friends of the Earth Europe are launching the latest version of the Meat Atlas on Wednesday September 8, 2021 at 8-9:30 a.m. CT. IATP was proud to contribute two articles to this edition of Meat Atlas. Register for the virtual launch here.

Europeans eat an average of 66 kilograms of meat per capita every year, more than twice as much as nutritionists recommend, global consumption is increasing. The persistently high consumption also causes immense social and ecological costs. To keep up with this, industrial animal farming is on the rise and keeps pushing sustainable models out of the market. To raise awareness, provide comprehensive information and foster nuanced debate on the livestock sector, the Heinrich-Böll-Stiftung and Friends of the Earth Europe have compiled updated facts and figures to the Meat Atlas published in 2014.

Many problems make a transition in the livestock sector more urgent than ever: The livestock industry is responsible for up to 21% of global greenhouse-gas emissions and meat production is estimated to increase by 40 million tonnes by 2029. Livestock farming and soybean cultivation are the biggest contributors to deforestation, whose effects include soaring emissions, destruction of indigenous communities’ and small farmers’ livelihoods, and pandemics. The leading producers of fodder crops – the US, Brazil and Argentina – are also among the world’s largest users of pesticides which pose a health threat, contaminate groundwater and harm biodiversity.

In the framework of its European Green Deal, the European Commission proposed a “Farm to Fork Strategy”. While it is the most coherent attempt yet to respond to the fundamental challenges plaguing the food system, much will depend on concrete transposition into policies. In relation to animal farming the Strategy looks into a few main areas – reduce the contribution it has to climate change, biodiversity loss and pollution, use of antibiotics and increase animal welfare.

During the launch, we will explore the following questions: What needs to happen to transform the livestock and shape production and consumption patterns towards sustainability? What instruments exist within the framework of the CAP and the national strategic plans? Are the political proposals in the European Green Deal, especially those outlined in the Biodiversity and Farm-to-Fork Strategies enough to transform the industrial meat model and meat consumption? How to avoid incoherent policies in other fields, such as trade?

- Reactions and comments from:

- Q&A from the audience

Register for the virtual launch event.