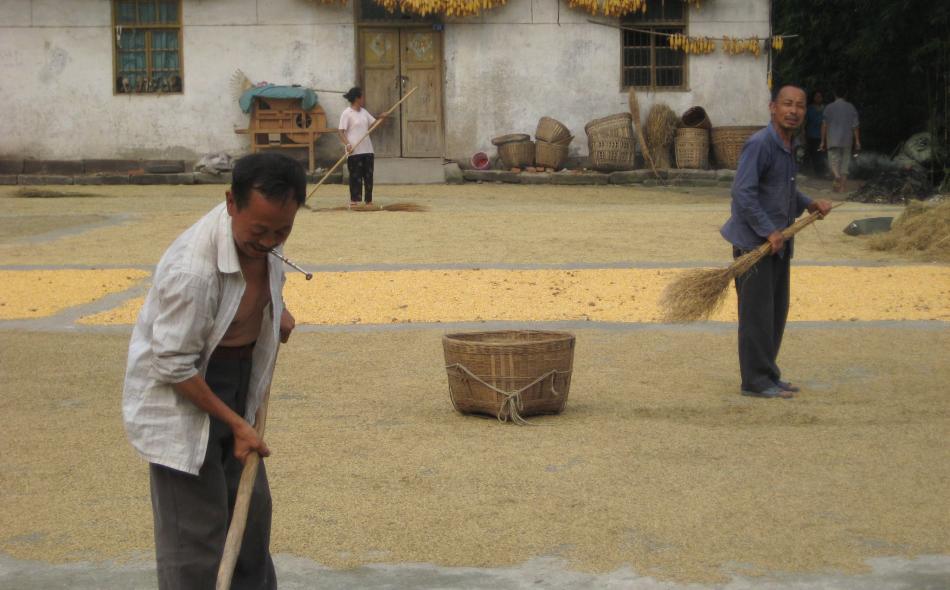 It has been a frustrating week for me, trying to track down Chinese friends during the long National Day holiday to learn more about two recent media reports about new government restrictions on industrial agriculture there.

China's Ministry of Agriculture has announced a forthcoming ban on antibiotics as growth promoters in animal feed. The ban is supported by the academic community, which believes that without antibiotics in animal feed, the health of animals will be better promoted, microbes' resistance to antibiotics will be lowered and food will become safer to eat.

This brief, tantalizing piece (essentially a partial translation of an only slightly longer piece in Chinese) raises as many questions as it answers. For me, the big ones are:

Traditionally, most pig production in China was done on small, diversified farms. Much of the feed was homegrown, and the manure was composted and returned to fields as a highly prized fertilizer. A report by Mindi Schneider that we released earlier this year entitled Feeding China's Pigs documented government support for the trend toward industrialization of pork, in large facilities where feed (loaded with antibiotics) is purchased from outside and manure is a costly waste product. As in many other countries, the price of pork has gone down, but in addition to all its environmental and health impacts, the cheap factory-farmed meat has undercut small producers, who now raise less than a third of China’s pigs.

Will the ban on antibiotics help or hurt these household producers? It is possible that animals in smaller facilities don’t need antibiotics as much as those in large confinement operations, and will therefore fare better than their factory-farmed kin. But in the area of economic policy, China and the U.S. are alike in at least one way: When times get tough, political leaders look out for the interests of the biggest players first. If the government’s commitment to industrial production continues, the pork factories will likely get a bailout. So the actual effect of this ban on China’s farmers is a question mark.

The second Big China ag story this week concerns GMOs. The Chinese Ministry of Agriculture will soon announce a temporary ban on commercialization of genetically engineered rice and wheat, according to a story in the Chinese-language Economic Observer. Translated by Third World Network (TWN).

…there are two reasons for this delay in commercialization of genetically modified (GM) staple food crops: one is that there has been a lot of questioning about the safety of genetic modification from various sides; the other is based on the judgement (sic) that currently in China, GM staple food crop-related research, promotion, regulations, even later-stage business operation, etc. are not yet mature.

This is not a categorical ban on GMOs. Xinhua New Agency reported earlier this summer that four GE crops have been approved for import (cotton, corn, coy and rapeseed) and seven domestically developed plant varieties have been declared safe, but not yet approved for full-scale commercial production. (Yoke Ling Chee of TWN does a good job of explaining the distinctions, and giving the recent history of this issue.)

All the signals are that GE varieties are still widely accepted in Chinese official and academic circles as the silver bullet for increasing yields, and the development of these varieties continues. As meat consumption increases and conventional breeds reach their limits, China’s leaders see themselves between a rock and a hard place, forced to increase imports or raise domestic production any way they can. Taking the former path would mean violating a long-standing food self-sufficiency policy that requires 95 percent of domestic demand for staple grains to be met by domestic production, and would play havoc with global grain markets. (Corn imports are already increasing, which explains why a GE corn variety is exempted from the ban.) And their Old School Green Revolution farming—dependent on massive applications of water, pesticides and chemical fertilizers—is reaching a breaking point, while destroying environmental and human health. Overuse of heavily subsidized chemical fertilizers is so rampant that a recent study suggested corn yields would actually increase if fertilizer applications were cut in half.

At least for now, the few people and groups inside China advocating a more fundamental shift toward agroecological farming are not getting much of a hearing. But virtually everyone recognizes major problems with the status quo: unsafe food, low farmer incomes, environmental damage. And GMOs are as unpopular with consumers in China as anywhere else, and there are some prominent and vocal opponents in the scientific community as well. This issue has generated a lot of internet and media buzz, which tends to serve as a sort of flashy stand-in for giving people any actual political voice. (Hey, sounds familiar!) So this announcement is part genuine precaution, part attempt to calm consumer fears.

But while it’s not an unequivocal victory, it IS a victory! In much of the developing world, after all, Monsanto is drafting national biosafety laws. This decision, along with recent lawsuit inolving the Indian government against Monsanto, and South Korea’s decision to ban antibiotics as animal feed additives, indicate that emerging economies are increasingly willing to stand up to multinational agribusiness (and the U.S.) in order to defend their national food sovereignty.

I will be in China next week talking about price volatility, and following up on the antibiotic and GMO stories: Stay tuned!