The politics of GMO in China 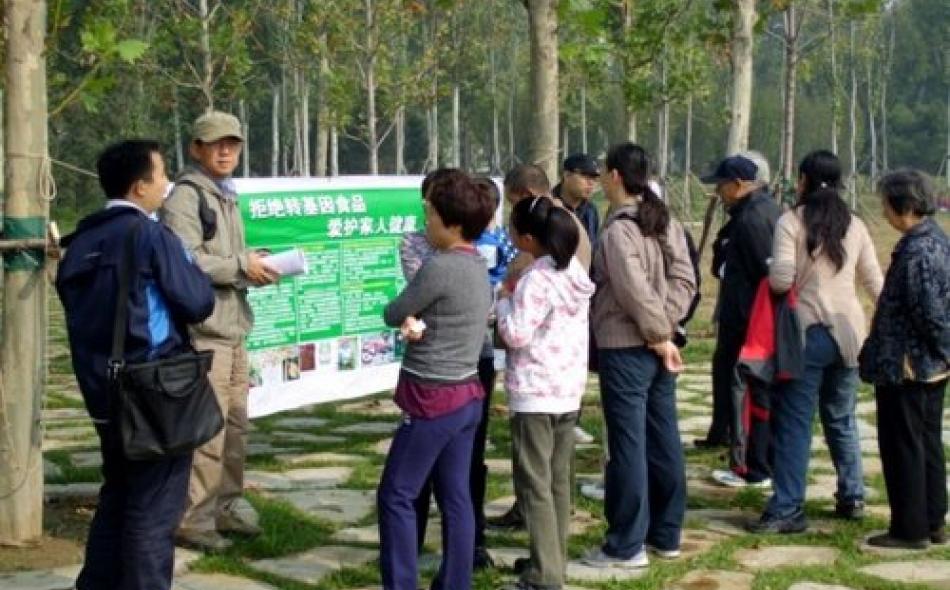 Recently, I wrote about China’s announcement to ban commercialization of some GMO crops for “five to ten years.” This week I went to China to speak at a conference on agricultural policy, and although GMOs were not on the conference agenda, I was able to learn a bit more about the current state of GMO politics in China. Among others, I had a chance to speak with two organizers for Greenpeace China who work on this issue.

Greenpeace has actively campaigned against GE rice research and commercialization in China for years. On several occasions in the past five years, they tested rice and processed foods available on the market in Mainland China and Hong Kong (and even some Chinese-made food products in Europe) and discovered that a not-yet-approved strain of GE rice was entering the food supply. They also found that some breeds of GE rice being developed in China contained genetic material already patented by foreign firms, undermining the argument that by developing their own varieties, China was avoiding dependence on foreign-owned seeds.

For their efforts, Greenpeace have been subjected to a media blackout on more than one occasion (The Information Ministry simply tells all news outlets not to report on their work.)—a sign that they’re doing something right. But they have almost certainly had an impact, if not by directly influencing policy, then by providing ammunition to a passionate homegrown movement of Chinese opposition to GMOs.

China’s anti-GMO activists are an interesting bunch. There are some prominent intellectual voices, such as IATP ally Jiang Gaoming at the Academy of Sciences. Here is one of his English-language pieces on the issue, but he has been sharper in his criticism (and attracted more attention) with his Chinese blog. (For you Chinese readers, see his critique of the answer to Question #31 in 100 Questions About Agricultural GMOs, published by the Ministry of Agriculture Press. The question is, “If insects don’t eat insect resistant GE rice, can people eat it?” and the answer is, “Sure!”)

But vocal opposition is much more widespread than just a few scientists, and tends to be associated with nationalist, often neo-Leftist politics. Utopia, the biggest website for Chinese “netizens” of this political bent, has a special section devoted to attacking GMOs and publicizing anti-GMO protests. These protests are generally not large, but they are very frequent and widespread. There was an “educational activity” about GMOs at a public park in Beijing just before I arrived.  During an international conference on sustainable agriculture that IATP co-organized with People’s University in Beijing in 2010, one session was temporarily interrupted by activists who chanted anti-GMO slogans and unfurled a banner. (This seemed like an odd choice, since GMOs were universally criticized by conference speakers as a false solution to global food security!) Along with concerns one might see anywhere in the world—loss of farmer control of seeds, food safety concerns, lack of genuine yield increases, association with increased pesticide use, etc. etc.—Chinese opponents are especially strident in their criticism of genetic engineering as a “foreign” technology, and genetic engineering of rice especially as an existential threat to Chinese civilization.

China’s anti-GMO activists are not always accurate in their claims (some Chinese friends were rather dismissive of their more conspiratorial charges) but this opposition is big and loud and does not seem to be harassed as much as some of the other dissident movements. I think it’s protected in part by its mantle of cultural nationalism, and in part by the fact that in China food security (and especially rice) is an issue on which there is little room for error, so skepticism about new and unproven technologies is not just tolerated but perhaps shared at high levels.

And why shouldn’t they be skeptical? There is growing evidence that the social, environmental and even agronomic costs of GMOs outweigh thir benefits, most recently articulated in the Global Citizens Report on the State of GMOs. And in the case of rice, China are the world’s champions at raising yields through conventional plant breeding. Just this fall, Professor Yuan Longping, the Father of Hybrid Rice in China, introduced a new, non-GE variety that broke the world yield record,  producing 13.9 tons per hectare! (A friend tells me it also tastes great.) If China’s own scientists can do that without genetic engineering, then why relax the Precautionary Principle for GMOs?

Looking at the bigger picture, I wonder what other shake-ups may be in the offing for China’s agricultural policy and bureaucracy in the next year. Despite the “Three Rural Issues” policies of the current Chinese leadership, which have been decidedly more farmer-friendly than those of Jiang Zemin, China’s farm and food system continues to be plagued by widespread rural unrest over land grabbing, rampant food safety scandals and environmental collapse in rural areas. We can hope that the good news on GMOs (qualified though it may be) is just the beginning.