The “deal” in Durban: What happened on agriculture at the climate talks? 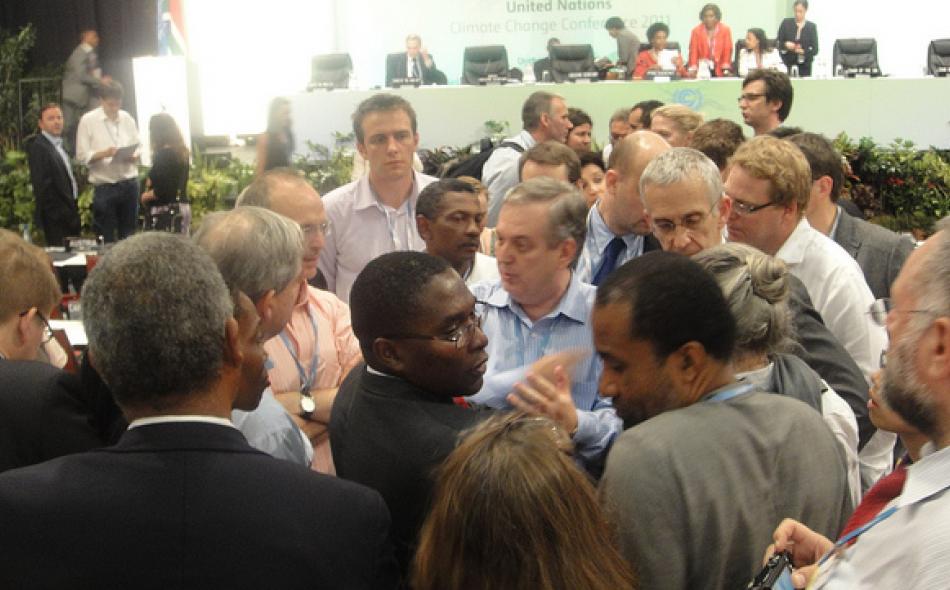 Tension ran high as the climate talks came to a close on December 11.

Used under creative commons license from adopt a negotiator

There is little doubt that agriculture is both affected by and directly affects climate change. Exactly how to address agriculture within the U.N. Framework Convention on Climate Change (UFCCC), however, is not easy to answer. Before Durban, negotiating text had been circulating since before the 2009 Copenhagen climate summit, virtually unchanged for two years.

How could agriculture be so controversial, one might wonder? One of the main sticking points for agreement over the agriculture text was the legal context in which negotiations were set. Agriculture was being considered under a mitigation workstream in the Bali Action Plan called “Cooperative sectoral approaches and sector-specific actions.” The framing constraints imposed on the negotiations by a mitigation context made many countries unhappy. Most developing countries, for example, are much more concerned about impacts of climate change on agricultural production and adaptation challenges, and felt no need to agree on how to cooperate on mitigation within the sector. The two weeks of negotiations in Copenhagen in 2009 were taken up convincing developed countries to insert language on adaptation, food security and small farmers, but in the end no agreement on the complete text was reached.

Paragraphs on trade were also inserted at that time, insisting that nothing agreed to in those talks could be used to create barriers to international trade. This proved the most important issue blocking progress on the agriculture text in these intervening two years, including at negotiations in Cancún in December 2010. Countries such as Argentina and Brazil were adamant that no text would go ahead without those paragraphs; New Zealand, the United States and other developed countries insisted against them. Cancún ended as it began, in deadlock over an essentially unchanged text.

This whole story should beg the question of why developed countries were so keen on an outcome on agriculture to begin with, but no developing countries were part of the clamor for including agriculture, and clearly the U.S. and its allies were doing all they could in Durban to try to get one or two African countries to even show up in the negotiating room and utter the phrase “work program.” Particularly for African countries, agriculture is much more important as an issue under adaptation, not mitigation.

One clear reason is developed country interest in creating market-based mechanisms in the agriculture sector. Developed country agriculture makes significant contributions to global greenhouse gas emissions. Emitters could reduce their emissions directly, at the national level, in which case you don’t need an international mechanism for reductions. Or, emitters could design a sectoral trading or crediting mechanism where emissions are reduced in one part of the world, but paid for, and reductions credited to, emitters in another part of the world. The European Union is keen to develop such a sectoral mechanism in agriculture. New Zealand—with huge emissions from its agriculture sector that it doesn’t necessarily want to reduce—is also looking for a way out of its own obligations. The United States, always a fan of market mechanisms, lent significant weight in the negotiations as convener of the pro-agriculture group of developed countries.

So what finally happened in Durban? The main text desired by the developed countries would have established a “work program,” that is, a series of technical papers, workshops, and ultimately perhaps legal decisions. Such a process would have likely included work to develop and sanction standardized methodologies to count emission reductions or carbon sequestration such as, for example, methods to measure soil carbon sequestration. UNFCCC validation of methodologies could provide credibility and increase investor confidence in the nascent but floundering market in agricultural soil carbon.

But Durban began with positions hardened and there was no change in political landscape to unblock the process towards such a work program. The World Bank (supportive of carbon markets) had tried to contribute to momentum for a work program by sponsoring a series of meetings over the year, including a meeting of African agriculture ministers (seven showed up) in September in Johannesburg, which crafted and issued a ministerial declaration calling for a work program. This effort made little noise in the negotiating room.

The political puppeteers knew that no progress would be made during negotiations, so they arranged to not negotiate the agriculture text at all over the two weeks. Their plan was to push the disagreement to the ministerial level where they hoped they would be able to manufacture their deal behind closed doors. The French environment minister convened a series of consultations with key players and crafted the final compromise text:

So in the end, there was no work program on agriculture established at COP17, merely an exchange of views at the SBSTA. What will happen in the UNFCCC beyond this step is unclear, though the desire on the part of developed countries to establish some sort of trading mechanism in the sector is unlikely to disappear.

What we can expect is a continuation of this conversation on climate change, agriculture, food security and markets in various additional forums in 2012, including at Rio+20 and in the Committee on World Food Security. In effect, there is already a work program on agriculture and climate change in progress, managed by the World Bank, the The CGIAR Research Program on Climate Change, Agriculture and Food Security (CCAFS), and the FAO, and some of its products, such as a roadmap for Greening the Economy with Agriculture, can be expected to be launched at key meetings over the course of the year. In fact, the drivers of the agriculture and climate change agenda don’t really need a decision at the UNFCCC to move their agenda forward.