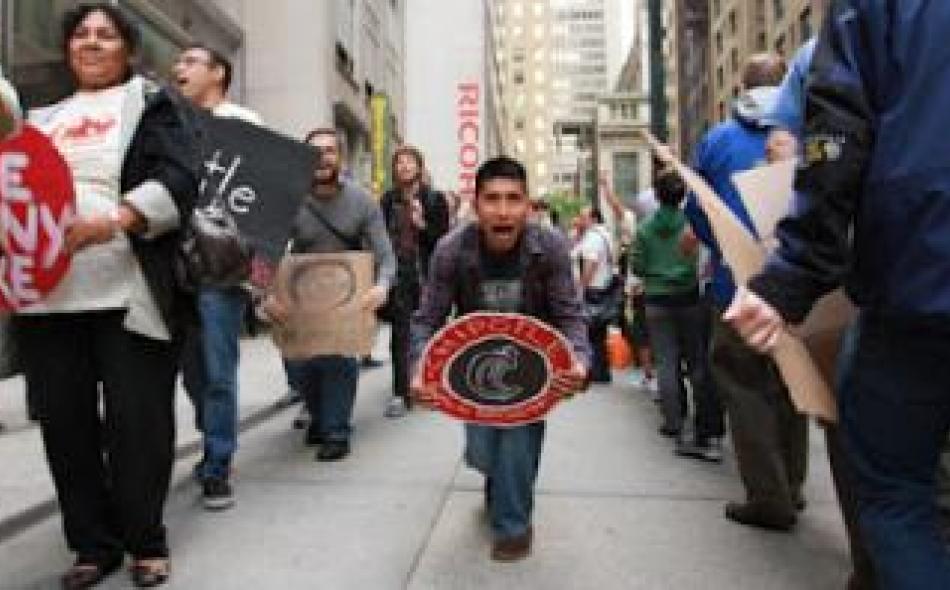 While the food movement gains steam and several hundred good food advocates across the country gear up after the W.K. Kellogg Foundation’s annual Food and Community Gathering, it may be worth our while to stop for a moment and reflect. Perhaps taking a cue from the Occupy Movement’s General Assembly, this year’s gathering was titled Assembly Required,calling on those of us who identify with the struggle for a more humane and just world created through food to come to the table together.

Coincidentally, this is just what food worker justice struggles have been seeking for years. Although focused on what might have traditionally been identified as “labor struggles,” organizations like the Coalition of Immokalee Workers, (CIW) the Food Chain Workers Alliance (FCWA), and Centro de Trabajadores Unidos en La Lucha (CTUL, Center for Workers United in Struggle, in English) all lend texture to the fabric of sustainable food struggles. And in doing so, they confront some of the biggest entities in the food world today.

Some of the companies being targeted for food worker injustice may not be a big surprise—such as the FCWA campaign against Darden (owner of Olive Garden and Red Lobster) to stop discrimination and wage theft at some of its NYC chains, or the recent CTUL campaign to win better wages and protections for workers who clean retail and grocery stores in the Twin Cities area.

But as much as we might like to make clear distinctions between who the “good guys” and the “bad guys” are, some of these struggles are being waged within the very landscape of what many would consider to be the “good food” movement. This includes the CIW’s six-year-long effort to get Chipotle to agree to sign the organization’s Fair Food agreement, which would guarantee basic rights (such as an end to physical abuse on the job and a dignified wage) to the farm workers who supply the corporation with tomatoes. So far, the would-be leader in sustainable food has yet to budge, instead responding with slick PR responses that carefully (or carelessly, depending on your point of view) twist the truth and expose the hypocrisy behind “Food With Integrity.”

Its true: the big tent we’ve begun to assemble for the food movement will be required to win the world we envision. But in doing so, let’s not forget to ask ourselves if we’re willing to let the pursuit of profit quietly divide our struggles. We might instead envision a movement that won’t let its potential leaders forget about the smudges on their records. By holding corporations like Chipotle accountable to the working conditions in the fields, the food movement can better hold them up as an example of sustainability. By allowing Chipotle to brush off the issue, we turn a blind eye.

Since 2001, ten other major corporations have reached Fair Food Standards agreements with grassroots organizations like the CIW, and we cannot allow these historic gains to be set back by a reticent few. If these agreements are possible, then it is certain that corporations like Chipotle, Darden, and others can also step up and ensure that the workers who make their profits possible are treated with dignity. And we, as consumers, allies, and fellow foodie advocates, can help make this happen.

This entry originally posted on the IATP Food and Community Fellows blog.