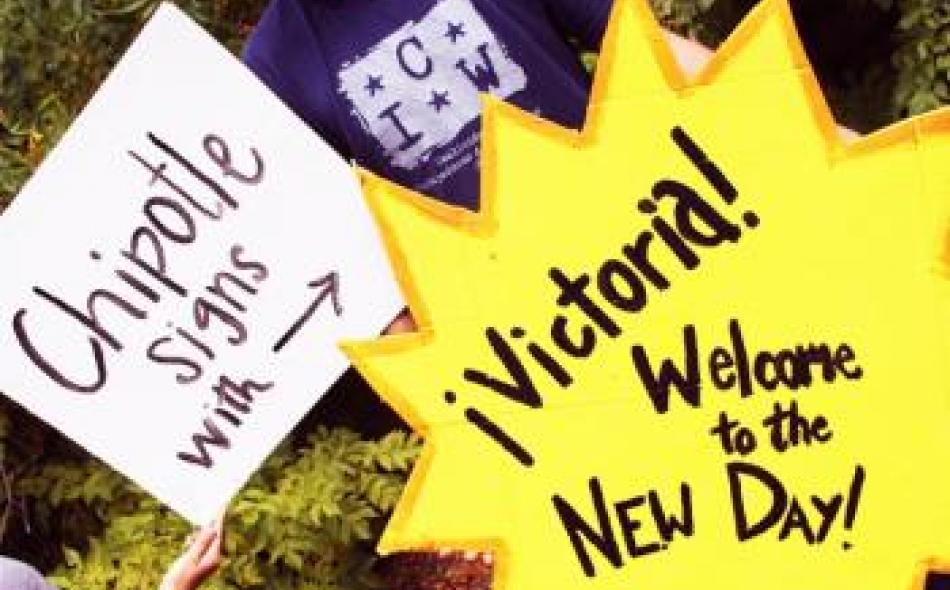 After a six-year struggle, Chipotle Mexican Grill has signed an agreement with the Coalition of Immokalee Workers (CIW) to join the Fair Food Program. This victory came just days before a massive CIW action was to take place at the Chipotle "Cultivate Festival" near its headquarters in Denver, Colorado and represents a historic moment for the Food Justice movement. "After six long years, people all across the country have added their own grain of sand to this growing movement," IATP Food and Community Fellow Kandace Vallejo said in an email about the victory.

The agreement, which will improve wages and working conditions for farmworkers in Florida who pick tomatoes for Chipotle, comes in advance of the winter tomato-growing season, when most of the nation’s tomatoes come from growers in Florida.

The Fair Food Program provides a bonus for tomato pickers to improve wages and binds growers to protocols and a code of conduct that explicitly include a voice for workers in health and safety issues, worker-to-worker education on the new protections under the code, and a complaint resolution procedure which workers can use without fear of retaliation. The Program also provides for independent third party audits to ensure compliance.

“With this agreement, we are laying down a foundation upon which we all—workers, growers and Chipotle—can build a stronger Florida tomato industry for the future,” said Gerardo Reyes of the CIW. “But more than this, today’s news marks a turning point in the sustainable food movement as a whole, whereby, thanks to Chipotle’s leadership, farmworkers are finally recognized as true partners—every bit as vital as farmers, chefs and restaurants—in bringing ‘good food’ to our tables.”

Chipotle is the 11th company to join the CIW’s Fair Food Program, which is designed to create a sustainable tomato industry through respect for the rights and concerns of all involved. The Fair Food Premium paid by participating buyers like Chipotle is used to help participating growers improve wages and working conditions for Florida farmworkers.

On October 10, 2012, the CIW will be the only US-based organization awarded with the Food Sovereignty Prize, “for creating one of the most powerful and inspiring worker-led movements that is transforming not only an industry but the consciousness of a nation.”

This blog entry was originally posted by the IATP Food and Community Fellows program.