Government's seat at the dinner table 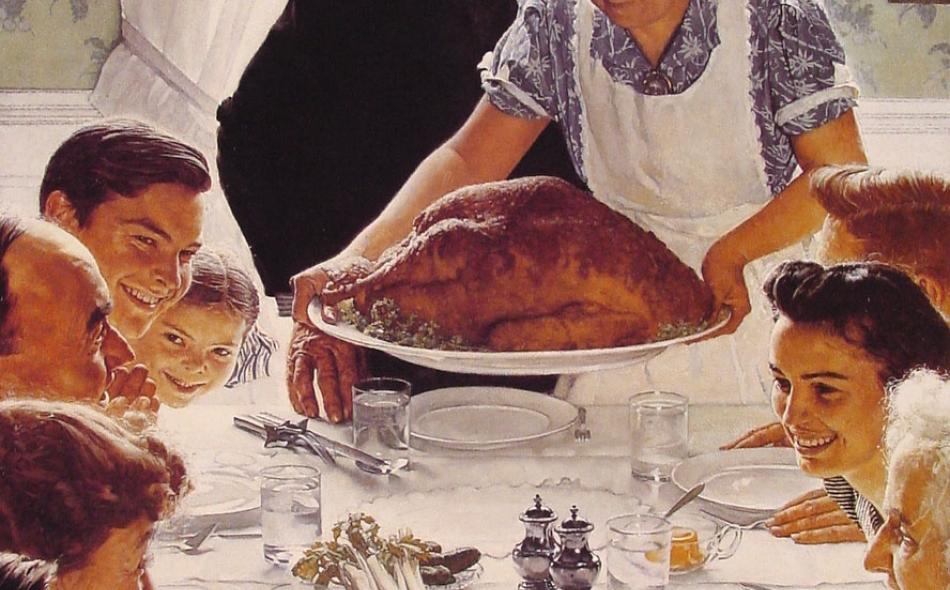 "Freedom from Want," by Norman Rockwell

This piece is an introduction to a new collection of commentaries by the IATP Food and Community Fellows, originally published on www.foodandcommunityfellows.org. Follow the links below for each piece.

The Norman Rockwell painting “Freedom from Want” is a tribute to one of the four freedoms that President Franklin D. Roosevelt declared people ought to enjoy in his 1941 State of the Union speech. For Roosevelt, this freedom meant having “economic understandings which will secure to every nation a healthy peacetime life for its inhabitants—everywhere in the world." His words later influenced the inclusion of the right to an adequate standard of living—which includes a right to food—in the Universal Declaration of Human Rights.

Reading these words 70 years later, we need to recognize that our country of over 300 million people has close to an equal number of images of what "freedom from want" really means. An extended family enjoying an enormous turkey dinner for Thanksgiving is just one idealized perspective from the dominant culture.

With these diverse perspectives come very different ideas for what government’s role should be in achieving a truly just and healthy food system. The past 70 years have brought different actors to our dinner table, most notably agribusiness and food marketers. Given these new dinner companions, how many spaces should be saved for Congress and local government officials?

Many of the IATP Food and Community Fellows argue that corporate interests have been somewhat unruly guests at the table. And unfortunately, we have far too many examples of government being absent from the tables where it is invited and intruding on the tables where it isn’t needed. From international trade agreements to the creation of local food policy councils, however, the clear, resounding proclamation emerging from these commentaries is that participation is required. Whatever your "freedom from want" looks like, we all need to claim our place at the table.

Get engaged and Vote Food!

The Government Should Follow Our Lead on Food
By Jane Black
Food should be the kind of issue on which the government can easily take the lead. But in our hyper-partisan political climate, this just isn't the case.

The Government Can Start With Women and Infants
By Kimberly Seals Allers
Our government remains an active participant in promoting unhealthy food practices for its most vulnerable citizens. Let's start with the first food, breast milk.

Good Policy Means Engaging With Communities
By Kandace Vallejo
There is a productive tension between the belief that policy is a viable mechanism to create change and the belief in innovative grassroots solutions to social problems.

Support Resilient Solutions to Community Food Needs
By Brahm Ahmadi
For a more just and healthy food system, government needs to ensure a balance and parity between government support for large corporations and for small, local businesses.

Nurture Grassroots Food Policy Councils
By Malik Yakini
Governments have to be willing to engage with community-driven efforts to solve problems of racial inequity in our food system.

Make USDA the People's Department
By Cheryl Danley
We need to acknowledge the U.S. agricultural system was built on a foundation of structural racism that has led to the social injustices we face today.

Education is the Answer, for Government as Well as Consumers
By Kelvin Graddick
Healthy eating education efforts are rarely framed in the context of the traditions and culture of the rural black south.

Pass a Farm Bill Now
By Don Bustos
Delaying the passage of this farm bill jeopardizes the fragile policy work done over years by local, state and national groups to make some progress toward a fair, equitable and sustainable agriculture system in this country.

Government Is What We Make Of It
By Nina Kahori Fallenbaum
We shouldn't conclude that historical missteps eliminate the usefulness of government or diminish our need to keep it accountable.

Restrain Corporate Power and Influence in the Food System
By Raj Patel
Perhaps that’s why the most exciting changes in the food system are happening at a municipal and state level. Initiatives like food policy councils are useful first steps in the practice of reimagining how democratic control of the food system might look.

Honor and Restore the Right of the People to Feed Themselves
By Valerie Segrest
For the Coast Salish people of the Pacific Northwest, our traditional food system is inextricably intertwined with our identity, and it’s crucial that government food policies honor that bond.

Would you like more figs with that? Pass a Farm Bill for Farm-to-School
By Rebecca Wiggins-Reinhard
Schools are one major entryway into improving children’s health. Yet, schools have been an outlet for surplus commodities, many of which are designed for a long shelf life, full of sodium and preservatives.