Reports of the global land rush come to Washington 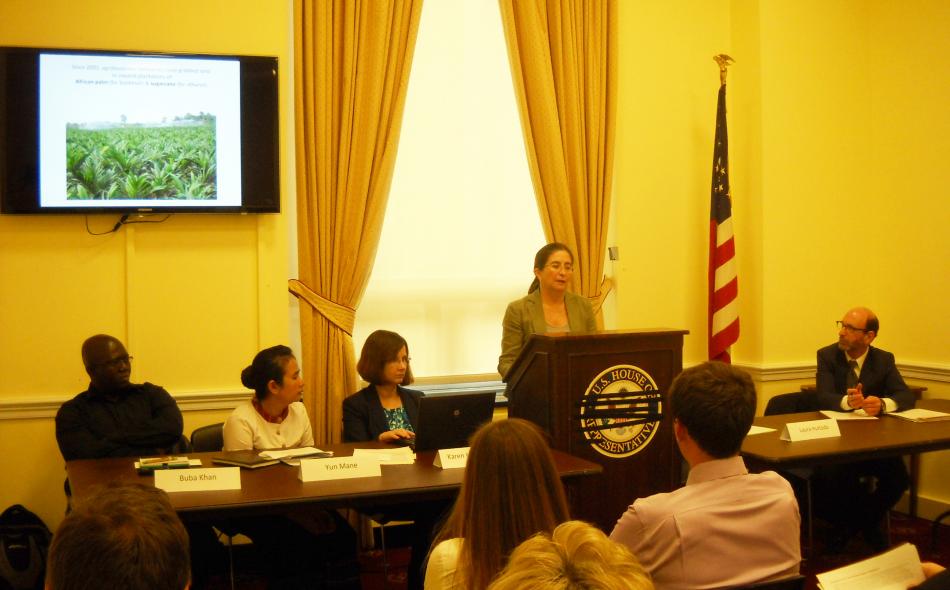 “You can have food in the stores, but will people in the community be able to buy it?” This was the question posed by Buba Khan, of ActionAid in Africa, to attendees at a Congressional briefing IATP co-hosted last week with ActionAid, Oxfam America and the Heinrich Boll Foundation.

Khan was referring to the effects of “land grabs,” a growing global phenomenon spurred by rising demand for natural resources like agricultural land and mining. These land grabs often displace people and communities who rely on the land for their livelihoods, food and water, as well as deep historical and cultural connections.

At the Congressional briefing last week, speakers from Cambodia, Ghana and Guatemala spoke about how land grabs have occurred in their countries, and what role U.N. Voluntary Guidelines on the Responsible Governance of Land Tenure agreed to last year might play in developing new rules to protect local communities from powerful foreign investors.

Yune Mane, of the Cambodian Indigenous Youth Association, told attendees about how the Cambodian government had granted land to outside investors (often Chinese, French or Vietnamese) for giant rubber plantations or mining. As a result, Indigenous people in the country have lost their right to land and access to spiritual areas, affecting their access to food and increasing poverty. In Cambodia, there are actually strong laws protecting Indigenous rights, including the 2001 Land Law and 2002 Forest Law, Mane said, but enforcement of these laws has been poor.

In Guatemala, about 46 percent of smallholder farmers have lost their land in the last 15 years, reducing their ability to feed their families and increasing poverty, according to Laura Hurtado of Oxfam in Guatemala. Hurtado cited the entrance of palm and sugar plantations used for biofuels and food ingredients as being the major driver of land purchases in Guatemala.

Approximately 200 million hectares have been purchased in Africa over the last 10 years, Khan explained. Land is being bought by foreign governments and companies, mostly in secret deals, for food, biofuels, mining, forestry and livestock production. He cited Sun Biofuels’ 99-year lease on land in Tanzania as an example of how communities throughout the continent are losing control of their natural resources.

Richard Gaynor, of the Millenium Challenge Corporation (a quasi-U.S. government program that works with developing countries to reduce poverty and promote economic development), talked about the value of the U.N. Committee on Food Security’s Voluntary Guidelines on land tenure. As an example of how the guidelines have been useful, he pointed to an irrigation project in Senegal, which included two years of community engagement to ensure property rights were documented and respected, local design was included, and it was fully transparent. He believed that these types of participatory approaches with communities, and that follow the principles of the U.N. voluntary guidelines, are essential for the future.

The U.S. government’s role in land grabs has been mixed. The Obama administration has endorsed the CFS voluntary guidelines, but, as we reported earlier this year, the administration’s free trade agenda has strengthened the hand of foreign investors and contributed to land grabs.

Congress has largely been silent about global land grabs. Meanwhile, the rush for control of the world’s natural resources shows no signs of slowing down.