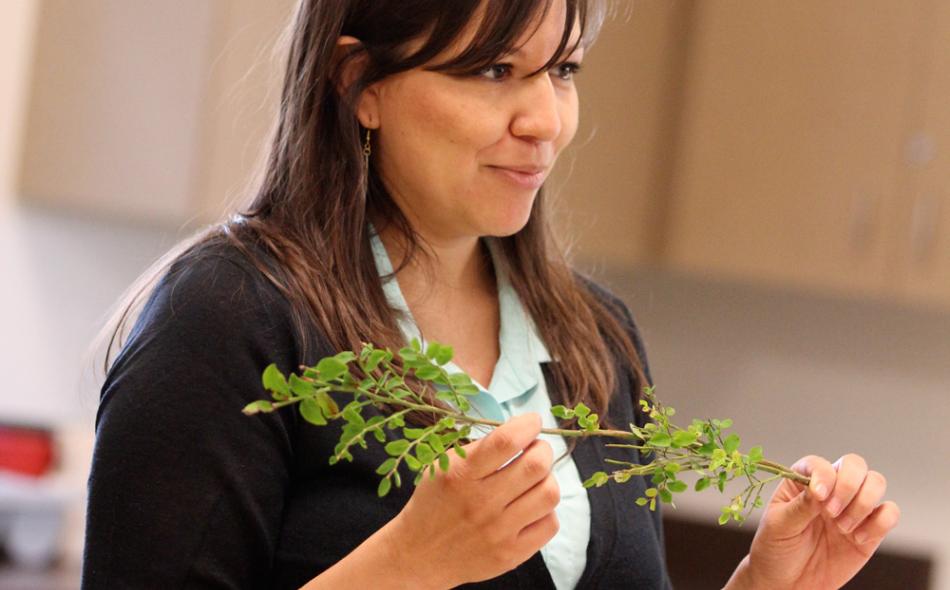 Valerie Segrest talking about huckleberry while teaching the group about making tea.

In late June, alumni from the past eight classes of the IATP Food and Community Fellows program met for the last time against the backdrop of the Snoqualmie Falls outside of Seattle. Almost every class was represented at the event heldand its alumni and to discuss the future of the network within the context of the larger food movement.

Launched in 2001 as the Food and Society Policy Fellows, the program was originally envisioned as a “public policy education team” that would work in support of the vision and goals of this new program at the W.K. Kellogg Foundation and hosted by IATP. The Fellows were innovative changemakers who advocated for food and farming systems that would be just and healthy for all people. The program nurtured the development of 86 alumni, many leaders in their fields, and helped make major contributions to the growing food movement. In late 2012, the W.K. Kellogg Foundation announced that it would no longer be funding the Fellows’ program.

A reception featuring local fruits and beverages and a dinner highlighting Washington cuisine kicked off the event allowing Fellows to share stories, meet alumni from other classes, reconnect and discuss the latest news and ideas in their fields. Discussions included the challenges of modern fishing, mushroom foraging and the finer details of what was served for dinner that evening.

On the second day, the group visited the Muckleshoot Tribe reservation, located between Seattle and Tacoma, to share a traditional lunch and take part in activities with some of the tribal members. Valerie Segrest, a Fellow from the eighth class and a member of the tribe, spoke about traditional methods of making tea and medicine using plants foraged from tribal land, including huckleberry and fireweed. A demonstration of the large open grill and a traditional pit oven illustrated how the local salmon and potatoes were prepared for lunch. A cedar-bark weaving demonstration rounded out the visit.

Many of the Fellows enthusiastically discussed how life-changing the IATP Food and Community Fellows program was for them and their gratefulness for being a part of it. Conversations about the future of the network started right away and continued throughout the entire event. Fellows shared their visions for an alumni network and the challenges and opportunities ahead for such a network. They’re hoping to see the alumni network evolve to help further each individual’s work and the food movement as a whole.

The IATP Food and Community Fellows program may have ended but the energy and work of the individuals involved will continue to further the food movement. This celebratory and planning event captured all that the Fellows have accomplished and helped kick off exciting future plans.