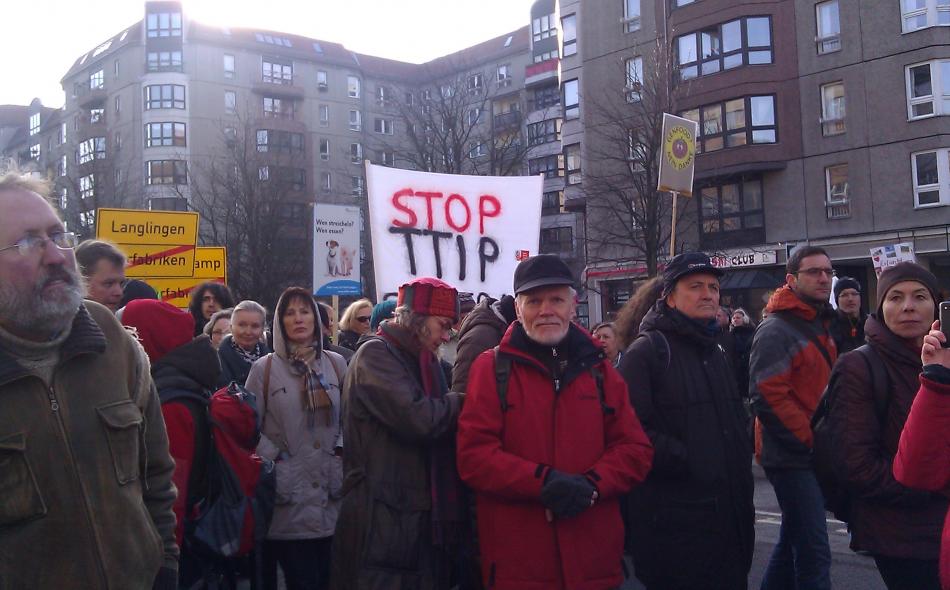 On a slightly chilly morning last Saturday in Berlin, more than 30,000 people marched through the city to raise their voices against industrial agriculture and for good food and good farming. This was the fourth year for the Wir Haben Agrarindustrie Satt (We’re Fed Up with Agribusiness) march, and the biggest so far. The day started off with a breakfast led by family farmers from around Germany and the region. They led the march with a caravan of tractors, followed by slow food, animal rights, environmental, trade, development and other activists in a joyous celebration of food justice and local democracy.

The march was the culmination of a series of events during Green Week. We started with a public forum on agriculture and the Transatlantic Trade and Investment Partnership (“TTIP: No We Can’t!”) organized by Martin Haüsling, a Green Party Member of the European Parliament. The German government held its annual Global Forum for Food and Agriculture, which included informative sessions organized by NGOs, academics and corporations on the future of the food system. All great events, but hard to beat the Snippledisco (Disco Soup), where hundreds of people chopped vegetables deemed not quite good enough for the supermarket to pounding music, at once protesting food waste, preparing soup for the demo the next day and just having a great time.

Our colleagues at ARC2020, a broad coalition pushing for reforms in EU agricultural policies, were among the leaders of the week’s events. ARC (and IATP board member) Hannes Lorenzen guided me through the march explaining the groups organized against GMOs (a hot topic, since the European Commission is considering approval of a new variety of GMO corn), factory farming, and TTIP. We stopped for a while to join Benny Haerlin, also from ARC2020 (and the Future of Farming Foundation) to raise our voices for local seeds, leading hundreds of marchers chanting “Freiheit fur die Vielfalt!” (Freedom for Diversity!).

And at the end of the march, I had the honor of following Slow Foods movement leader Carlo Petrini in a short speech to the crowd. We in the U.S. haven’t yet made the enormous strides of the EU in fixing our broken food system, but we haven’t been sitting still either. I told them of the state level campaigns all across the U.S. to label GMOs and get toxics out of our food and environments, and the Farm to School and other local foods initiatives that bring farmers and consumers together in ways that are fair, healthy and sustainable. And of the waves of activism all across the country to oppose fast track, TTIP and other trade deals that put those fragile gains at risk.

It was an inspiring event, all about rebuilding the food system from the ground up and changing the rules that result in corporate concentration, unfair prices for farmers, and unhealthy diets. A tough act to follow, but wouldn’t it be great to try?

See more videos from the demonstrations and events in Berlin.