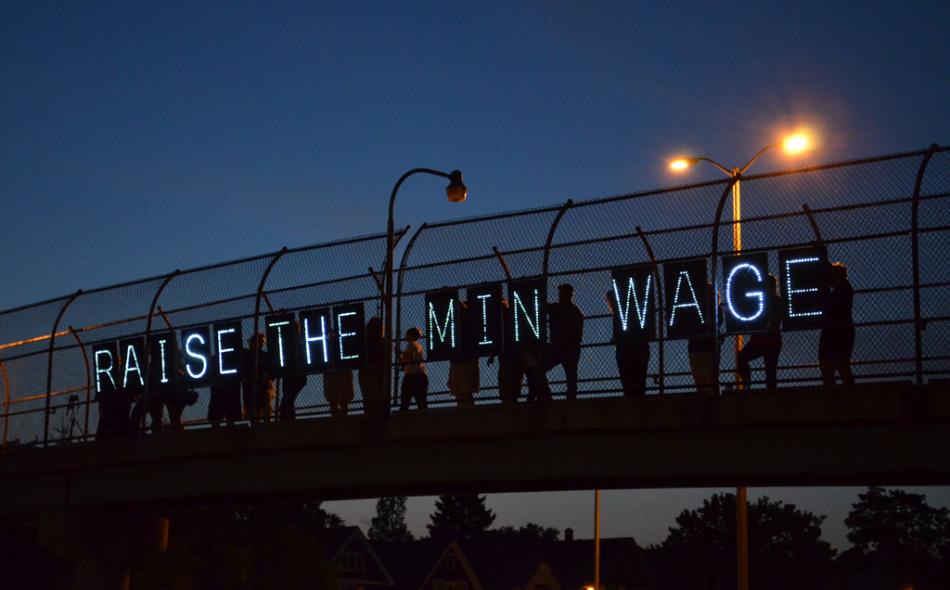 Whether it is in the processing plant or in the supermarket or in the restaurant, food service workers are some of the lowest paid in the country and most impacted by minimum wage laws. Meanwhile, according to a report by the National Employment Law Project, corporations like Wal-Mart, Yum Brands! (Pizza Hut, KFC, Subway) and McDonald’s are among those who benefit the most from low wages.

It’s been five years since the minimum wage was raised. In those same five years, everyday costs like transportation, rent, electricity, child care and food have all risen significantly. Incredibly, the tipped minimum wage has been frozen at $2.13 an hour since 1991. Women represent nearly two-thirds of those making a minimum wage and tipped workers are overwhelmingly women, young and more likely to live in poverty than the national average.

While Congress has been slow to act, many states and cities are forging ahead. Thirty-eight states are considering minimum wage increases in 2014. Five states and the District of Columbia have enacted an increase so far and 21 states already have a minimum wage higher than the national average.

U.S. policy makers of all political stripes have been schizophrenic on income inequality. Despite speechifying on the issue, the Obama Administration continues to aggressively push for free trade agreements that are linked to increasing income inequality. Republicans vehemently oppose a minimum wage increase, and decry government spending, yet raising the minimum wage to $10.10 an hour would decrease food stamp enrollment by between 3.1 to 3.6 million people while decreasing program expenditures by $4.6 billion, according to the Institute for Research on Labor and Employment.

The income inequality gap that has accelerated since the economic crisis is something that affects all of us, particularly the food and agriculture system. Raising the minimum wage won’t solve income inequality but it’s a common sense first step. Let Congress know the time has come to raise the wage by joining more than 100,000 people who have signed this petition organized by the Food Chain Workers Alliance, ROC-United and Welcome Table.