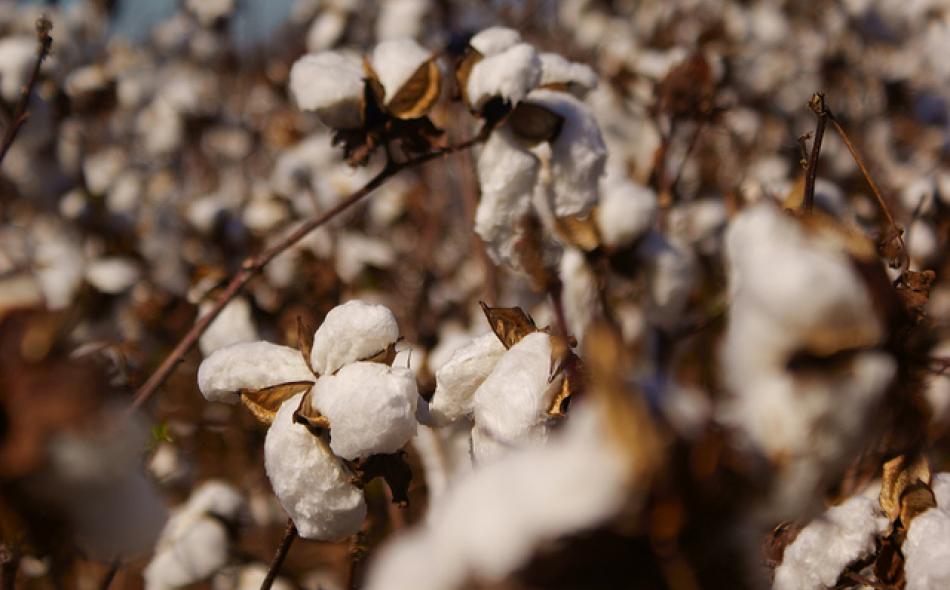 Brazillian cotton on a farm near Aral Moreira, Mato Grosso do Sul, Brazil

The signing ceremony in Washington was timed to ensure minimal Brazilian press coverage, as Brazil focused on the October 5 presidential and sub-federal elections. Brazil won the cotton dispute in 2004. However, the United States tried various tactics to avoid complying with the WTO rule of law, including claiming that a dispute under the existing WTO rules could only be resolved under the terms of new rules in the yet to be concluded Doha Round of WTO negotiations. Following an unsuccessful U.S. appeal, Brazil was authorized by the WTO in November 2009 to levy up to $800 million in annual retaliation, including retaliation outside the agricultural sector.

It useful to memorialize the MoU’s terms of surrender and the shock and awe precedent it sets for any WTO member who is contemplating litigation against the 2014 Farm Bill. Then we can speculate about why Brazil agreed to a settle for a relatively paltry sum and to abandon its rights as a WTO member to dispute the cotton subsidy terms of the 2014 Farm Bill.

First, the United States agreed to pay the Brazilian Cotton Institute (IBA is the acronym in Portuguese) $300 million. (Subscription required.) This one time and final payment includes the $12.25 million monthly payments that the U.S. had agreed in 2010 to pay IBA, but that the U.S. Trade Representative said it had no Congressional authority to disburse as of October 2013. (Subscription required). By reneging on its 2010 agreement, the U.S. apparently created leverage to win this even more favorable end to Brazil’s WTO authorized right to retaliate.

In sum, the U.S. is paying IBA $147 million that it already owed from the unpaid October 2013 to September 2014 retaliation, plus another $153 million. The 2010 retaliation agreement required the United States to pay IBA $147 million annually until the Congress changed the cotton subsidy payments and export/import loan guarantees conditions that were the subject of the trade dispute that Brazil launched in 2002. In February 2014, Brazil requested the formation of a WTO compliance panel to ensure that the provisions affecting cotton in the 2014 Farm Bill would conform to the WTO ruling against U.S. Upland Cotton Subsidies. The request also portended a possible broader battle against the Farm Bill’s crop subsidy program (subscription required), in which taxpayers, not agribusiness, compensate farmers when prices fall below a legislated per crop reference price.

Under the terms of the MoU, Brazil must not only withdraw its current WTO compliance panel request, but also agree to a four-year “Peace Clause” during which it will not litigate the cotton subsidy and loan guarantee program terms of the 2014 Farm Bill until its expiration in September 2018. The United States exported more than an average of 80 percent of all U.S. grown cotton from 2009-2011, even while paying retaliation to Brazil during the last two years of that period. Now it can export an even higher percentage with no worries about further Brazilian cotton litigation. Brazil’s Minister of Agriculture said, however, that Brazil maintains the right to dispute subsidy programs for other crops in the Farm Bill.

Of course, having negotiated this “Peace Clause,” there is no reason to believe that the United States could not negotiate another similar “Peace Clause” against WTO litigation regarding the 2023 Farm Bill and so on. In effect, the United States would achieve a trade policy version of perpetual “peace,” while remaining itself free to launch litigation against the agricultural subsidy programs of other WTO members.

The MoU allows Brazil to spend the $300 million only on a detailed list of permitted activities and Brazil is required to report semi-annually to the United States how it has spent the money that it is receiving in lieu of WTO authorized retaliation. The permitted activities do not include the financing of cotton planting, as IBA producers had demanded. (“U.S. Brazil Poised to Unveil Cotton Deal; Includes $300 Million Payment,” Inside U.S. Trade, subscription required)

Among the permitted activities is cotton research “conducted in collaboration” with the U.S. Department of Agriculture, with U.S. universities and possibly in “partnership with third country institutions.” This latter permitted activity is the only aspect of the MoU that refers, however obliquely, to the WTO’s program to aid four African countries dependent on cotton for export revenues (the so-called C4 countries), but who are in competition with heavily subsidized cotton growers and exporters.

In 2006, IATP analyzed the “WTO Cotton Crisis” in the C-4 countries in the context of the WTO failure to prevent agricultural export dumping and the price dominance of polyester textiles derived from oil, whose massive subsidies and price distortions are not subject to WTO rules. The cotton price and export revenue crisis continues. Cotton prices on the Intercontinental Exchange fell about 27 percent between June and mid-August 2014, and more than any other commodity in 2014 on the Goldman Sachs Commodity Index.

U.S. cotton growers can live with and even prosper under low prices, even at prices below the cost of production, thanks to the 2014 Farm Bill’s Stacked Income Protection Plan and other taxpayer funded subsidies. However, C-4 cotton farmers cannot prosper, or even survive, in such a price environment. IATP has contended for more than a decade that U.S. agricultural export dumping, i.e. trading at below the cost of production, is permitted under WTO rules. Instead of resolving that unfair trading practice, the WTO Agreement on Agriculture (AoA) limits the annual domestic subsidies (Aggregate Measures of Support or AMS) of its members, the statistical basis for Brazil’s dispute with U.S. Upland Cotton Subsidies.

Clearly, the United States has a number of diplomatic weapons that may have influenced Brazil’s decision to capitulate in U.S. Upland Cotton Subsidies. Well calculated threats to counter-retaliate via tariff and non-tariff measures without WTO authorization in both agricultural and non-agricultural sectors; the possibility of attacking the value of Brazilian currency through dark market foreign exchange trading exempted from Dodd-Frank financial reform legislation; intelligence gathered through surveillance of Brazilian officials, including the President of Brazil, as revealed by Edward Snowden: these are among the weapons that could have been used to persuade Brazil that it was in its best interests to take pennies on the dollar of WTO authorized retaliation and give up its rights to litigate U.S. Farm Bill subsidy measures.

More prosaically, however, Brazil’s business interests in the United States, including its globally dominant JBS meatpacking firm, are more lucrative than cotton even when processed as a textile. Surrendering on U.S. Cotton Subsidies may be a price Brazil is willing to pay for unspecified market access opportunities and U.S. regulatory favors for Brazilian industry and finance in the United States.

But that truce among the two trading giants disregards the disastrous impacts of dumping on the African farmers and cotton exporters who continue to confront unfair trade rules negotiated without their participation or consent. The U.S. technical assistance plan for the C-4 African cotton export revenue dependent countries budgeted for $16 million in 2012, i.e. $4 million each or less than a third of the retaliation payments that the U.S. sent to Brazil each month for more than two years. The C-4 countries were third party plaintiffs in Upland Cotton Subsidies, but never saw a dollar of the vastly reduced WTO authorized retaliation.