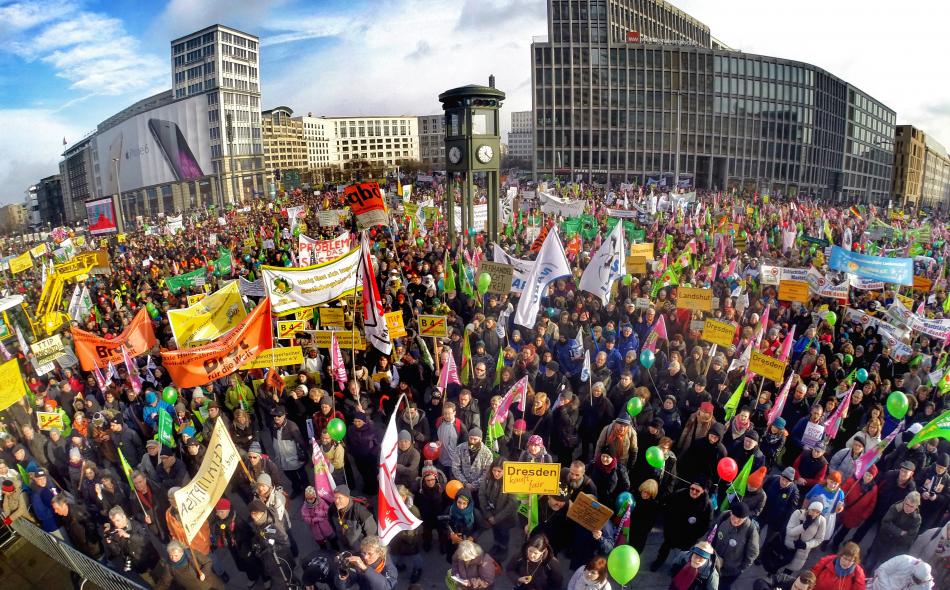 We are hearing more and more news from Europe that the Transatlantic Trade and Investment Partnership (TTIP) is running into stiff head winds, and I had the pleasure of seeing this growing storm of opposition first-hand in Berlin last week. I attended a series of events culminating in the WIR HABEN ES SATT! “We’re Fed Up” march, a massive mobilization of people saying no to industrial agriculture. This year, a special focus was on TTIP and GMOs and demanding new protections for animal welfare. This was the fifth year of the march, and at 50,000 people, the biggest so far.

One of the organizers of the march, ARC2020, described the event: “Farmers and beekeepers, tractors and stiltwalkers, samba bands and chanting citizens of all ages made their colourful way from Potsdamer Platz to the Angela Merkel’s chancellery. Their aim? To say no to a broken industrialised globalised food system and yes to an alternative.”

IATP’s Shefali Sharma spoke at the We’re Fed Up rally following the march, along with Alessa Hartmann from the German organization Power-Shift. Shefali spoke about the reasons people in the U.S. are opposed to free trade agreements. We’ve seen what happens when corporations gain power at the expense of family farmers and local economies. “But,” she added, “the corporations and the Obama administration haven’t accounted for the massive organizing of unions, environmentalists, faith and farm groups to stop fast track and set our food systems in a different direction.”

Alessa pointed out that this agreement is not about U.S. corporations taking over the EU food system, but rather a corporate-driven agenda from both sides of the Atlantic. Citizen action must be transatlantic too. Shefali went on to say, “We have a vision for our agriculture that gives power back to family farmers, workers and consumers of the food system to produce agroecological, ethical and healthy food. We have to stop corporations from capturing our regulations that can make this vision a reality! We have to stop TTIP.”

After the march, at the “Soup and Talk” gathering at the Heinrich Boell Foundation, people met to talk about next steps. I met Walter Haefker, the head of the European Professional Beekeepers Association. IATP and ARC2020 organized a webinar last month to consider the possible threats of TTIP on new rules to limit the use of neonicotonoids, a pesticide linked to bee colony collapse. Walter told me that TTIP is already hurting beekeepers, as the European Commission recently gave in to longstanding U.S. opposition to GMO labeling of honey. Honey, of course, isn’t genetically modified, but consumers want to know if the pollen is from GM plants. TTIP could eliminate European consumers’ right to know that fact, especially for imported honey. We all discussed plans for a global day of action against free trade agreements on April 18.

Right now, U.S. groups are mobilizing to block fast track, a legislative mechanism that would let the administration negotiate trade deals in secret and then present the completed deal to Congress for an up or down vote. We’ll likely hear more about that tonight in President Obama’s State of the Union address, which is expected to hold up this tired and false solution for rebuilding our economies. In the EU, much of the center of attention on trade is on investment. Those are key campaigns, and with this kind of massive mobilization, there is potential to pave the way for a different kind of food system on both sides of the Atlantic.