Greece: No to austerity, yes to democracy 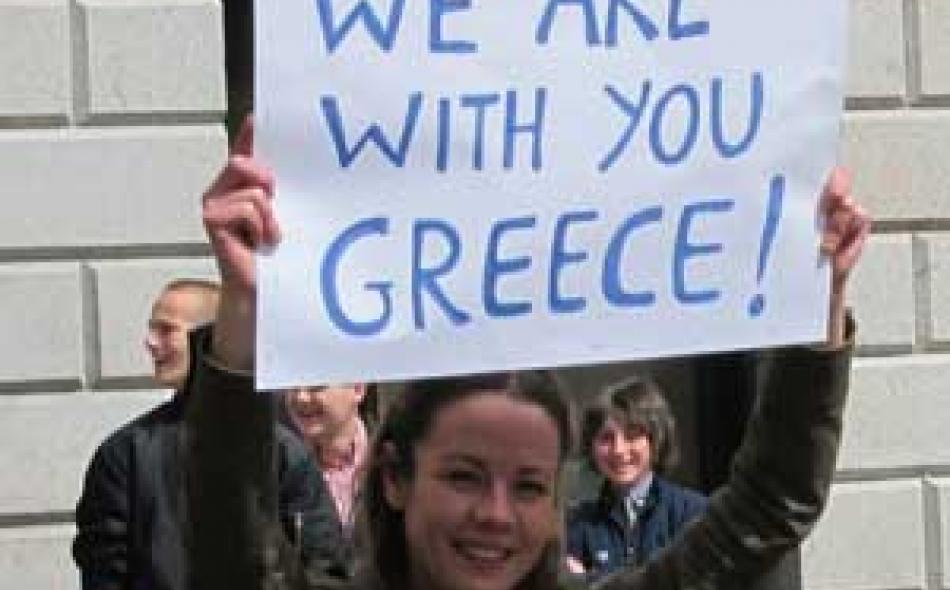 The people of Greece are at a critical moment as the country teeters on the verge of financial default. This is a clear case of the people against global banks and financial institutions. The Institute for Agriculture and Trade Policy urges all of our friends and allies to stand together with the Greek people and say no to the banks.

Greece is getting the kind enhanced financial torture from the European Union that the poor and working class received from Obama in the 2008 financial meltdown. Banks were bailed out and the people left to make do. The slow recovery in the U.S. has helped us to forget the days when ninety year old grandmothers, like Addie Polk in Akron, Ohio, were killing themselves in the face of bankruptcy and foreclosure. But in Greece, a country similarly brought to its knees by uncontrolled banks and corrupt politicians, the majority of its citizens have yet to experience any relief.

Years of austerity imposed on the Greek people have failed to solve the problems confronting the birthplace of democracy. Five months ago, the Greek people elected a progressive party called Syriza to say no to the austerity policies of the IMF and European Union. The Greek government has called for a referendum on Sunday, July 5th, when the people of Greece can say whether or not they want to submit to more unemployment, wage cuts, destruction of pensions, regressive taxes, and deregulation.

It is the International Monetary Fund, on behalf of the global elite, that is driving the austerity agenda against the Greek people. With the U.S. controlling almost 17% of the votes in the IMF, if President Obama wanted, he could lend a hand to the Greek people in this dark moment. He has done it before for others. When the big credit insurance agency, AIG, was going under, the President stepped up and provided a bailout. The AIG bailout included $36 billion from U.S. taxpayers for French and German banks, the same banks that have their feet on the necks of the Greek people.

Time is of the essence. Many of us are still reeling from the passage of Fast Track, but need to stand with the people of Greece who have had to bear the brunt of this latest assault by the global banking titans. We are asking you to send a message to President Obama and the U.S. Treasury to use their votes in the International Monetary Fund to press for a just and democratic solution to the Greek crisis.