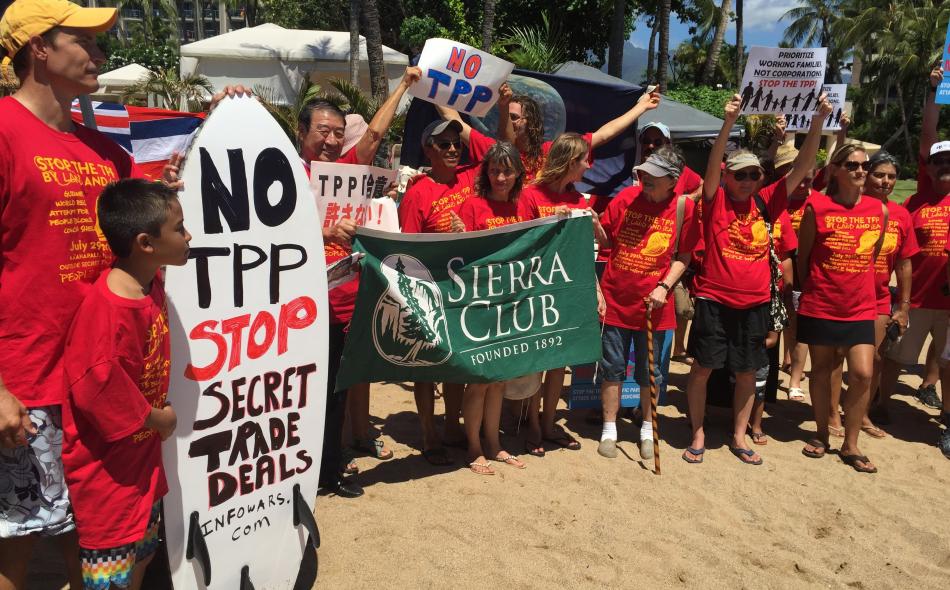 At the end of July, trade negotiators and ministers representing 12 Pacific Rim countries failed to reach agreements on the Trans-Pacific Partnership (TPP), leaving the negotiations hanging. Ensconced behind closed doors at the Westin Resort and Spa in Ka’anapali Maui for over a week, representatives were apparently less unified than the hundreds of protestors representing human rights, environmental interests and Native Hawaiians who gathered outside on the Ka’anapali beach. Those activists collectively broke the Guinness World Record for the number of participants in a simultaneous conch shell blowing, a massive kahea (call) to “Stop the TPP by Land & by Sea.”

Protestors fear that continued prioritizing of corporate interests in global trade treaties will derail the ability of Hawaiians to determine the health of their communities and environment.

In a press release issued at the start of the talks, Kaleikoa Ka‘eo, professor of Hawaiian Studies at the University of Hawaii stated, “The TPP is a threat to our sovereignty as Native Hawaiians, and as human beings. This secret trade agreement would allow corporations to control decisions about how we live without any accountability to us, the people of this land.”

Lack of corporate accountability for public health and the environment is not a new topic in Hawaii, a state that is recognized as ground zero for some of the most controversial agribusiness behavior. Since the collapse of the Hawaiian sugar cane industry in the 1990s, the world’s leading biotech companies—Monsanto, Syngenta, DuPont Pioneer, Dow and BASF—have descended on the state. Drawn to Hawaii for the year-round growing season, agribusiness has designated the islands as the premier location for the development of GMO and pharmaceutical crops. The Hawai’i GMO Justice Coalition estimates that GMO companies own or lease 40,000 – 60,000 acres in Hawaii for the development and testing of GE seed breeds – an industry that is worth $243 million. Of the 90 million acres of GMO corn grown last year on the U.S. mainland, almost all of it has Hawaiian ancestry.1

Public health concerns, fear of environmental consequences, and a lack of satisfactory regulation have prompted Hawaiians to create local laws that regulate the activities of biotech giants on the island. At the end of 2013, both Kauai County and Hawaii County passed local ordinances that attempted to mitigate the impact of the development of GM crops on local health and the environment.  Hawaii County Ordinance 13-121 banned biotech companies from expanding their operations to the Big Island, and prohibited cultivation of GM crops beyond papaya. Kauai’s Ordinance 960 required that Dow, Syngenta, BASF and DuPont Pioneer—who test and develop seed varieties on about 15,000 acres in Kauai County2—disclose their use of pesticides and GE crops, and establish pesticide-free buffer zones between fields and public areas, schools, hospitals and waterways. In 2014 a Maui County initiative created a temporary ban on GM crop production until the county could conduct its own environmental impact study.

These county laws sparked massive debates across the state about community rights to public health, and although the actions had public support, they were relatively short-lived. Within months DuPont, Pioneer and Syngenta filed a complaint in federal court challenging Ordinance 960, saying that their pesticide usage (which is ten times greater the national average for restricted-use pesticides),3 and development of GM plant breeds “present no unreasonable risks to the environment or public health,” and furthermore that any disclosure requirements of the use of pesticides and GM crops was “burdensome” and would “compromise Plantiff’s confidential commercial information and unnecessarily expose Plantiffs to risk of corporate espionage, vandalism and environmental terrorism.”4 Hawaii County’s ordinance was similarly challenged by the Biotechnology Industry Organization, as well as a number of grower associations in the county.5 Finally, the Maui County GM ban was challenged by Dow and Monsanto, which according to Honolulu Civil Beat, collectively raised nearly $8 million to challenge the initiative, while advocates of the ban have spent less than $83,000.

Eventually all three county actions were overturned by the U.S. District Court of Honolulu, which ruled that the ordinances are preempted by state and federal law. These disputes raise important questions about local democracy and community self-determination, and also illustrate the reasons for concern over the trade agreements that could broaden corporate control over local food systems. With increased ability to rely on “burdensome regulation” and the harmonization of standards across the Atlantic, multinationals will be able to advance a deregulatory agenda. State legislative measures designed to strengthen local economies will be at risk across the country.

Local policy innovators are fighting to create landmark state programs that promote a new vision for Hawaiian agriculture, or rather an old one, by investing in local agriculture to build sustainable and resilient systems of food production. In 2005 Hawaii enacted a measure that initiated the development of a modern sustainability plan for the island. The successor of the Hawai’i State Plan, Hawai’i 2050 is a state sustainability initiative that outlines goals and achievement indicators for the future of the island. The plan prioritizes “kanaka maoli,” Native Hawaiian tradition, while protecting the environment, natural resources, and promoting local food systems. The development of a stronger sustainability ethic, combined with grassroots efforts to promote local food and awareness of GMOs has prompted an upswing in sustainability-oriented policy, including:

Act No. 2013-55 Amends the Hawaii State Planning Act objectives and policies for the economy to support the purchase and consumption of locally grown food and food products, by residents, businesses and governmental bodies; provides for an effective promotion, marketing and distribution system.

At least 10 other bills are pending that work to regulate the growth and sale of GMO crops in the State.

Laws of this kind, that have created renewable energy standards and local food procurement programs, as well as others under consideration to limit or label the use of GMOs in food, create nutrition disclosure standards, and regulate state-grown labeling, could be jeopardized by TPP rules that deem them to be “unnecessary” barriers to trade. Hawaii’s internal struggle with biotech multinationals is rooted in the same concern of the protestors on Kaanapali beach who fear the prioritization of global commitments over the local interests. The bottom line is that these trade agreements, which promise transparency and regulatory protections, in fact have the potential to devastate local economies’ and rural communities’ democratic efforts to promote and protect safe and sustainable food initiatives.

IATP will be publishing a series of fact sheets that outline different high-risk areas of state legislation that may be undermined by TPP and TTIP.