The CETA Vote: Will the European Parliament learn from BREXIT and Trump? 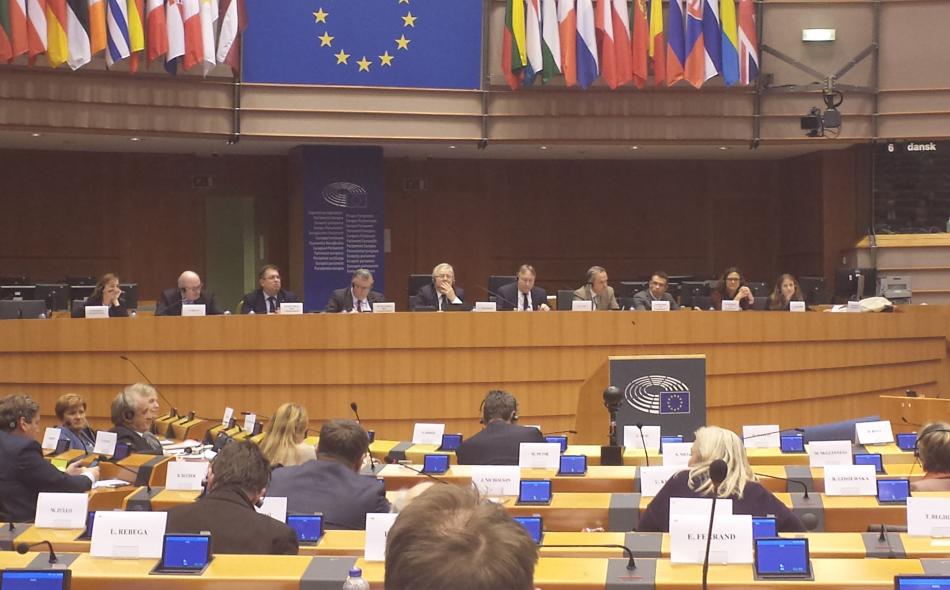 Our tour across Europe on Selling Off the Farm Corporate Meat’s Takeover Through TTIP and its links to the EU-Canada Comprehensive Economic and Trade Agreement (CETA) launched on November 29 at the European Parliament. IATP’s Senior Advisor, Sharon Treat, Waldemar Fortuna from the Polish organization, IGO and I met with several members of the European Parliament (MEPs), including coordinators of different political parties that will decide CETAs fate  in early February.

In the last two years, there has been an unprecedented awakening by ordinary citizens across Europe about the damage that free trade agreements do to policy making in the public interest. People have begun to understand that treaties, such as CETA and the Transatlantic Trade and Investment Partnership (TTIP), give transnational corporations even more power to expand and consolidate than they already possess. Many citizens have begun to challenge key elements of these agreements—such as the provisions that allow these corporations to sue governments for enacting public policies that might dampen their profits.

We set out to highlight key concerns that our research revealed about how agreements such as TTIP (and CETA) undermine their jobs as Parliamentarians, particularly when it comes to issues Europeans really care about like cloning, GMOs, and how meat is produced and processed. It became evident quite quickly that while many agreed or hesitatingly admitted that perhaps TTIP went too far in that realm, they were more than relieved to be able to say that CETA was no problem at all.

While politics in many of their countries involves serious crises in the agriculture sector—crashing dairy prices, rising input costs, a struggling beef production sector, the phasing out of small family farms—many of them believed that the competition with Canada would be beneficial to European farmers. Some Eastern European MEPs felt that joining the EU had transformed their economies in a positive direction, so certainly further opening up to free trade deals with industrialized countries will also be beneficial.

Never mind that CETA contains many of the same provisions that TTIP would, or that the Canadian meat market is not really “Canadian,” but rather North American. One of the clear outcomes of the North American Free Trade Agreement (NAFTA) has been the integration of the North American meat and feed industries. As a result, the meat industry can shuttle animals between the U.S., Mexico and Canada to cut costs of production and still market products as made in Canada or the U.S. That is until the U.S. implemented Country of Origin Labeling (COOL) for meat that required processors to state where the animal was born, raised and slaughtered. Ironically, Canada and Mexico, on behalf of the North American Meat Industry, put an end to this much desired consumer demand. They brought a challenge to the World Trade Organization, complaining that the U.S. law goes against free trade, and they won. The congressional lackeys of the meat industry in the U.S. were only too happy to repeal the law.

The European Parliamentarians have failed to understand this dynamic, that a free trade deal with Canada on agriculture, particularly meat, is also a deal with the United States—because these companies are neither American or Canadian. They are both. And what this means is that CETA, like TTIP, will hasten a very different agriculture system than what most European farmers and consumers want.

JBS and Cargill together control 90 percent of beef processing in Canada. And perhaps by 2019, JBS will be headquartered in Ireland. It is the world’s largest meat processor and also one that has aggressively bought out major brands in the U.S. and worldwide. Though currently headquartered in Brazil, having received substantial support from Brazil’s national development bank BNDS to become a “national champion,” the company had plans to move to Ireland this year, but BNDS shot this down recently. However, JBS’s shareholder agreement with BNDS ends in 2019 after which the company would be free to relocate to Europe.

The disconnect between these Parliamentarians and the voters they represent couldn’t be more stark—and I was reminded of Donald Trump’s election as President.  How badly the Democrats had miscalculated the disenfranchisement of Americans from their democracy, how angry they are at corporate control of that country—that they are willing to elect someone, even a corporate tycoon, who says that he will end corporate control, create jobs and end free trade deals that hurt American citizens. I am afraid for the European Parliament and for the European Project, because as long as they continue to ignore the protests and petitions and rightful critiques of these free trade deals, they are likely to repeat the same mistake that has, in part, led to Brexit and Trump.