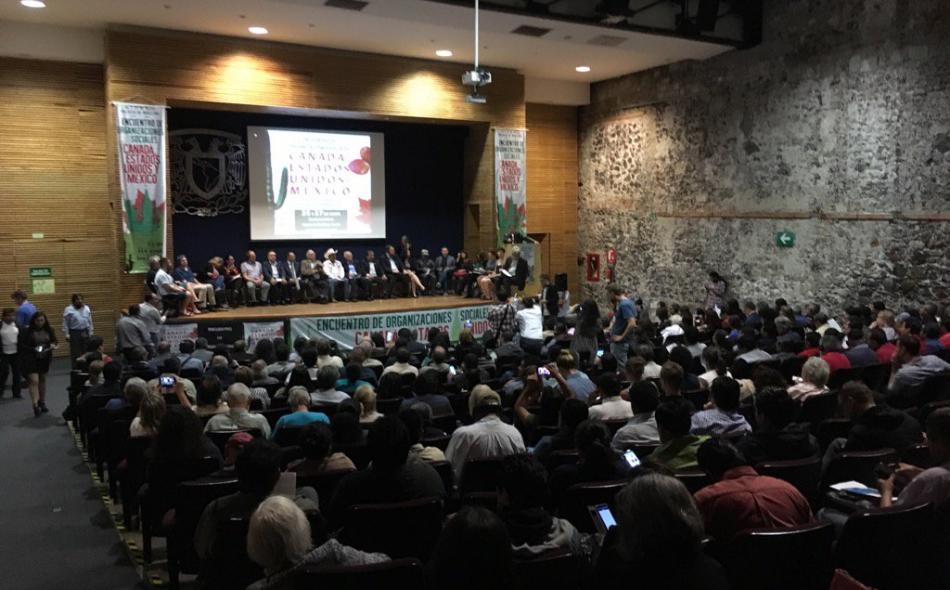 Hundreds of activists and academics, union members and farmers, environmentalists and educators, came together last weekend in Mexico City for a major trinational conference on the North American Free Trade Agreement (NAFTA). The meeting was held in a historic building very near the Zocalo, the central plaza where literally millions of demonstrators have marched over the years to protest privatization, inequality and corporate control over the Mexican economy. Those issues were echoed over and over again as participants from the U.S, Mexico and Canada identified common goals to replace NAFTA with a better approach to economic integration.

Unlike the Trump Administration, which views trade as a crude trade balance competition between countries, it was striking that no one at this meeting said this was a battle among the United States, Mexico and Canada. Instead, people talked about the many ways NAFTA has woven our three economies together and the role of multinational corporations in driving, and benefitting, from that process. Bruce Campbell from the Canadian Centre for Policy Alternatives explained that, “NAFTA is a key strand in a web of mutually reinforcing policies that hurt people in all three countries.”

Much of the current wave of pro-NAFTA propaganda from the corporate sector (especially agribusinesses) claims that pulling on that thread would cause the North American economy to unravel in ways that would hurt consumers and businesses. Those assertions ignore the fact that the underlying multilateral trade rules at the World Trade Organization would still be in place, and, more importantly, that there are many clear and consistent proposals in all three countries for a different kind of integration that would serve to raise wages and living standards, strengthen food and farm systems,  protect the environment and honor international commitments like the Paris Climate accords. Alberto Arroyo from the Universidad Autónoma Metropolitana put it best, “Ni NAFTA, ni caos, sí hay opciones” (Neither NAFTA nor chaos, there are options).

Of course, the wrong choices could well worsen many of the existing problems in NAFTA, especially if they bring in ideas from the failed Trans Pacific Partnership (TPP). TPP proposals to include commitments on education in provisions on services, for example, could increase pressure to privatize public education.  Proposed rules on digital trade could undermine rights to freedom of expression and privacy. These concerns highlight the dangers of so-called modernization of the trade deal. But they also mean that new constituencies are joining with the labor, farm, environmental and many other civil society groups already focused on the trade talks.

It’s impossible to separate Trump’s agenda on NAFTA from his xenophobic and racist proposals to build a wall between the U.S. and Mexico. Conference participants repeatedly rejected that agenda, and part of the work moving forward is to build new bonds of solidarity. Zorayda Avila from Alianza Americas, a national network of migrant community groups based in Chicago, stressed the ties that exist among workers and communities in Mexico and the United States and emphasized that no human being is “illegal”.

The Farm Bill is another thread that needs to be pulled to get to better outcomes for peoples in the three countries. The rules under the Farm Bill work in tandem with NAFTA and other trade agreements, compelling farmers to produce more and more for agribusiness to trade in foreign markets, even as prices and incomes tumble. The benefits of export oriented agriculture tend to accrue to the largest actors, particularly the agribusinesses most directly involved in international markets. While farmers’ planting decisions or poultry contracts are locked in seasonally or even longer, agribusinesses are set up to react to changes in markets at lightning speed. Those companies profit when prices rise or when they fall, as long as they are successfully predicting the direction of change.

Over the last several decades, IATP has documented the extent of export dumping of US farm goods (sales at below the cost of production), most recently in a factsheet on who wins and who loses from dumping of corn. As of 2015, we estimate that corn is sold at 12 percent below the cost of production, to the detriment of farmers around the world. At the same time, U.S. farmers are confronting four straight years of falling incomes. The National Farmers Union’s Barbara Patterson insisted at the NAFTA meeting that, “We need trade policy that works for farmers, not commodities.”

In the end, it would be much better to set aside the tangled mess that is NAFTA and work toward a different kind of agreement that starts from goals of raising living standards in all three countries. In a final declaration published in Spanish, English and French, the participants insisted that “North American civil society organizations will not accept a toxic NAFTA and will cooperate across borders to monitor, mobilize, educate and advocate to demand these objectives are achieved.” That is the challenge that lies ahead.