The end of the WTO as we know it? One can only hope. 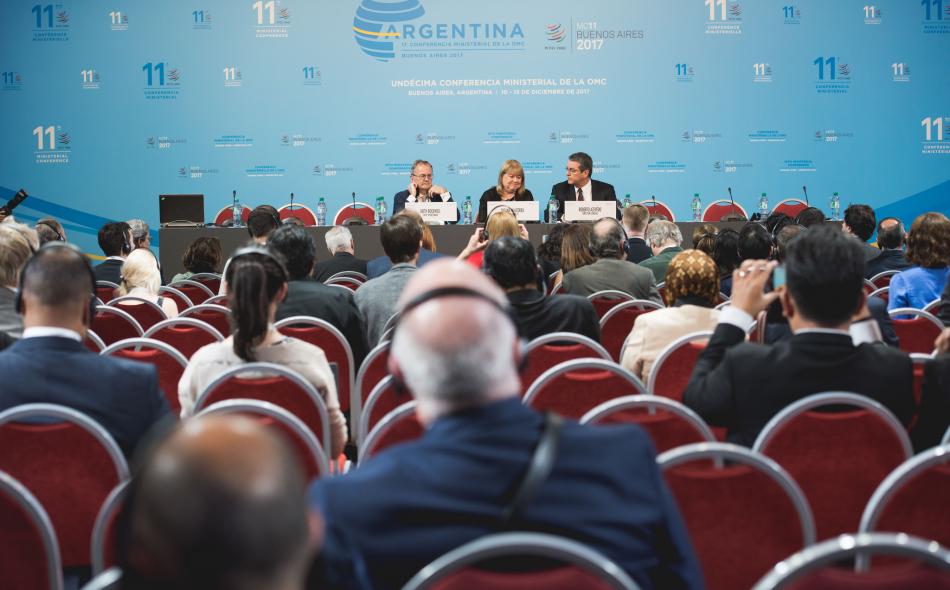 It was somehow fitting that the only rain to mar perfect late spring days of the 11th WTO Ministerial Conference in Buenos Aires last week fell as the meeting ended in failure. The purpose of a ministerial is to provide direction for the coming two years of trade negotiations; that is, to sign any agreements reached and to provide a working agenda for the biennium ahead. It is a necessary part of the WTO’s governance system—the moment when the public servants give way to the politicians; the moment the WTO is most likely to come to the attention of national media. This time, governments have nothing to show for their last two years of work and nothing much to offer to help make the biennium ahead more productive.

The failure to reach decisions in Buenos Aires was not a WTO Ministerial first: Seattle in 1999 collapsed a little too literally in flames, while in Cancun in 2003, the meeting ended early in anger when developing countries stalked out, furious at the U.S. and E.U. presumption that they were still in control of the agenda. Unprecedented or not, failure is not good for an organization, especially one with not a lot to show for its 20 years of existence and not inconsiderable use of limited public finance. Next year is the 10th anniversary since the WTO last significantly advanced the negotiations on its work plan, known as the Doha Agenda. WTO members never adopted those advances and are nowhere near adopting them now. In Buenos Aires, the very blandest of Ministerial Declarations (reduced to a kind of notice that a meeting took place) proved too bland for countries like India that were demanding resolution to substantive issues, especially public stockholding of food. Meanwhile, the United States Trade Representative had nothing to offer but his government’s refusal to talk substance. An entirely predictable, but, nonetheless, painful standoff was the result. Not with a bang—with hardly even a whimper—the headlines announced, “The end of the WTO as we know it”.

Truth to tell, we can only hope so. Change in the international trading system is long overdue.

The most common reaction from governments and business associations to President Donald Trump’s trade policy is to lament the loss of U.S. leadership in the promotion of trade liberalization. The critics have a point: There is little to celebrate in the current U.S. leadership. Yet, the problem has been coming for a while, and the issue is not quite as they describe it. Already, President Barack Obama’s Administration treated the WTO with disdain, choosing to focus its energy on so-called “mega-regional” agreements, in particular, the Trans-Pacific Partnership. Under President Trump, that disdain has given way to something more insidious: A deep dislike of multilateralism itself, coupled with a profound disregard for the niceties of negotiations. The U.S. is poorly served by this bellicose version of international cooperation.

The U.S. is a rich country and an important actor in international markets. It is also losing its once dominant role. U.S. trade continues to grow, but overall global trade has grown much more, leaving the U.S. with diminishing shares in many emerging markets. U.S. behavior now makes cooperation in the face of common challenges less likely; other governments are looking for ways to work around, rather than with, the fading super-power.

Developing countries are losing from the paralyzed status quo, too. Holding, rather desperately, to the Doha Agenda as the only basis they respect for negotiations, they cannot stop the surge of interest in other issues as time goes on. The Doha Agenda includes issues that matter to developing countries. But they need a new approach. The Doha Agenda, itself, is a messy patchwork of unfinished business carried over from the Uruguay Round Agreements that were finalized in 1994. That agenda dates back to the 1980s, and to a starrier-eyed infatuation with trade liberalization. It does not offer enough to today’s decision-makers.

The world needs a WTO as we have not yet known it—a WTO focused not on trade liberalization for its own sake, but as an inter-governmental decision-making body that seeks to understand and respond to trade’s role in realizing important shared goals, whether limiting the damage caused by climate change, tackling inequality, or investing in sustainable practices across the whole economy.

Too many governments support an agenda clearly written by the businesses already committed to global markets. They want to harmonize standards, limit taxation, and smooth the workings of their value chains. That want greater and greater interference in the domestic economic (and legal) space of countries, apparently oblivious to the hostile political reaction they have provoked. Of course, exporters are a legitimate voice in trade deliberations; they just cannot be the only voice. Governments have much broader obligations than the promotion of export sales. The WTO gets no legitimacy from being an organization dedicated to increasing trade flows and the profits of trading companies. Its legitimacy rests on its ability to ensure a fair, rules-based system in which all members feel heard and respected.

The time has come for trade rules that do not stop governments from domestic experiments with fairer and more sustainable economies, but rather encourage them, while protecting other countries from negative outcomes.

What would a meaningful agenda for trade rules look like? Take just two examples:

III. Can the WTO adapt and evolve?

Two signs that adapting the WTO to 21st century demands will not come easy were evident in Buenos Aires. First, there was the hostility to the Gender and Trade Declaration shown by many of the civil society organizations gathered at the Ministerial. The Declaration itself is innocuous—a long overdue recognition, arguably, that the trade liberalization agenda pursued so assiduously by governments over the past 30 years has had uneven and discriminatory effects, in too many cases reinforcing the disadvantages women already face in economic life. What angered many women’s organizations was the suggestion that governments would use the Declaration in the existing trade negotiating mix to push issues of interest to developed countries, continuing the push for deregulation and economic integration that has made programs to counter gender-based disadvantages harder to finance and implement.

An article from Third World Network includes the following quote: “The notion that trade is gender neutral, and free trade good for women, simply doesn’t stand up to the evidence” commented Sophie Hardefeldt, senior adviser at Trade Justice Movement and former manager of the Australian Women Against Violence Alliance. “The problem is that non-binding measures like WTO declarations and the inclusion of gender chapters in trade agreements might make for nice news stories, but they won’t address the myriad ways our free trade system exploits women, particularly women of colour.” An agenda for gender and trade is long overdue but it will require a lot more confidence-building than governments apparently realize.

The second sign is not dissimilar in its effect. Many governments went to Buenos Aires hoping to finally agree an outcome on 12 years of negotiations to end the use of certain subsidies in the fisheries sector. Initially, the proposal was a ban on subsidies that contributed to “overcapacity and overfishing” but, over time, this evolved into a discussion of subsidies that go into “IUU” (illegal, unreported, and unregulated) fishing, and developing countries grew increasingly concerned. Not just the handful of developing countries that subsidize fishing fleets to a significant level, but also much poorer developing countries for whom fisheries is a sector of significant economic importance. They feared they were being asked, yet again, to give up policy space they might need to develop an important sector. Once again, a relatively straightforward proposal. But, in the end, a simple agreement to stop subsidizing an activity that is jeopardizing the future of the industry for everyone turned into an apparently insoluble fight over development.

These signs are not the end of the story. But the lack of public confidence in the WTO, and the lack of trust among WTO member states, could end the organization altogether. The world is not well served by a vacuum where rule-making for trade should happen. I remain committed to the idea that the WTO’s transformation is better than its demise. But pushing an agenda that focuses only on the wishes of existing transnational business is no more helpful than building walls along the border. India has promised to host a gathering of developing countries in February to discuss a shared trade agenda. There is plenty of work to be done.