After the Trump administration announced plans to withdraw from the Paris Climate Accord, the governors of 18 states and Puerto Rico formed the U.S. Climate Alliance (Illinois and New Mexico joined in January). Together, these states represent more than 40 percent of the U.S. population, 50 percent of U.S. GDP, and would be the third largest economy in the world. This coalition has pledged to reduce greenhouse gas (GHG) emissions 26-28 percent below 2005 levels by 2025.

Each state has set its own climate goals and, while there is no official registry for specific action related to the pledges, alliance member states meet yearly to chart progress. The first of these meetings took place in the Fall of 2018, when the states shared advancements, and issued their first report on initiatives in the following areas:

The Natural and Working Lands initiative recognizes the potential of the natural environment (e.g. forests and wetlands) and working lands (e.g. agriculture) to “protect and enhance carbon sequestration.” Natural and working lands could sequester an estimated 110 million metric tons of carbon dioxide equivalent (Mt CO2e) by 2025. 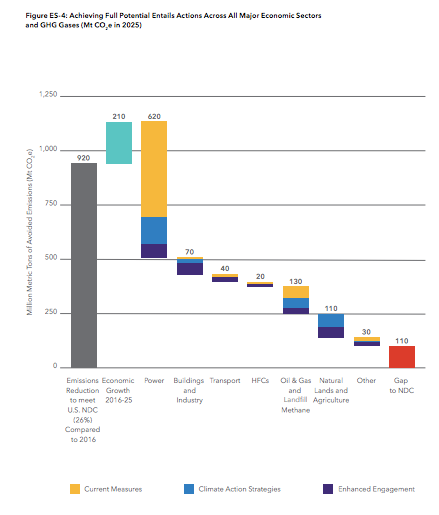 In ag, it's adaptation first

Climate change initiatives can take one of two forms: Mitigation strategies designed to reduce GHG emissions or adaptation strategies that respond to actual or expected consequences of an altered climate.

While the alliance recognizes the potential of land use in meeting its goals, mentions of agriculture initiatives as mitigation tools are sparse in the most current Climate Alliance Annual report. Instead, though the working lands initiatives vary widely from state to state in agriculture, adapting to climate change has taken priority. This approach is understandable given the importance and position of agriculture in the U.S. economy. Farms alone account for over $130 billion and 2.6 million jobs across the country. Agriculture also supports a huge swath of rural livelihoods. The USDA determined that 444 counties in the U.S. are farming-dependent. The statistically higher poverty rates of these rural areas, combined with the projected impacts of climate change on agriculture, make these regions more vulnerable to the effects of rising atmospheric GHGs and less able to adapt without some form of assistance.

The idea of using natural and working lands as a mitigation tool has started gaining traction with new evidence that farmlands can be low-carbon, carbon-neutral or even carbon-negative spaces. There is even emerging research on more climate-friendly methods of raising livestock. If properly managed, these agricultural methods present an important opportunity for states to make strides in meeting their emissions reduction goals while at the same time helping farmers and reaping cascading spillover benefits of healthier farming practices, such as cleaner water.

Hawaii and California have codified GHG reduction into law. California has reinvested about $600 million from its cap-and-trade program into their natural and working lands initiatives. The California Department of Food and Agriculture’s Healthy Soils program and the Sustainable Agricultural Lands Conservation Program through the Strategic Growth Council and Department of Conservation are part of the state’s efforts to sequester 15-20 Mt CO2 in the state’s farms, forests and other lands by 2030.

Hawaii became the first state to legally commit to the principles and goals of the Paris Climate Accord with laws passed in 2017 and then in 2018. Recognizing the potential of agriculture as a tool for mitigation, Hawaii established the Carbon Farming Task Force (later renamed the Greenhouse Gas Sequestration Task Force) to advise on agriculturally focused climate mitigation and adaptation strategies.

Mitigation and adaptation are not mutually exclusive

Many mitigative actions have adaptive benefits. For instance, practices that support soil health, (like cover crops or no-till) help keep topsoil carbon sequestered in the ground. But this practice also protects against drought—an increasing climate change-related concern—by increasing water-holding capacity. Soil health practices can further benefit farmers and the community by reducing erosion, thereby keeping nutrients in the soil, and reducing the need for fertilizer inputs, which, in turn, improves water quality.

Because a relatively small investment yields multiple benefits, states should encourage these practices for both environmental and economic reasons. States have employed this type of strategy with farmers in the past: In the 1990s, New York City decided that rather than building a $6 billion water filtration plant that would cost $250 million per year to maintain, they would instead invest in preserving the watershed that fed the city’s reservoirs at a cost of roughly $170 million per year. By paying farmers and landowners in the watershed to adopt practices to protect water quality, they protected the drinking water of the city’s nine million residents, reduced the costs, and helped upstate farmers transition to more environmentally friendly practices.

The Climate Alliance Natural and Working Lands Initiative could be structured to have multiple benefits:

As federal environmental programs are increasingly weakened or in jeopardy, states need to step up and protect systems that help both farmers and the environment. The inclusion of natural and working lands as an initiative in the Climate Alliance goals is a major step, but it is up to the individual states to now put concrete action behind this broader initiative.