Resiliency, agriculture and the 2012 drought 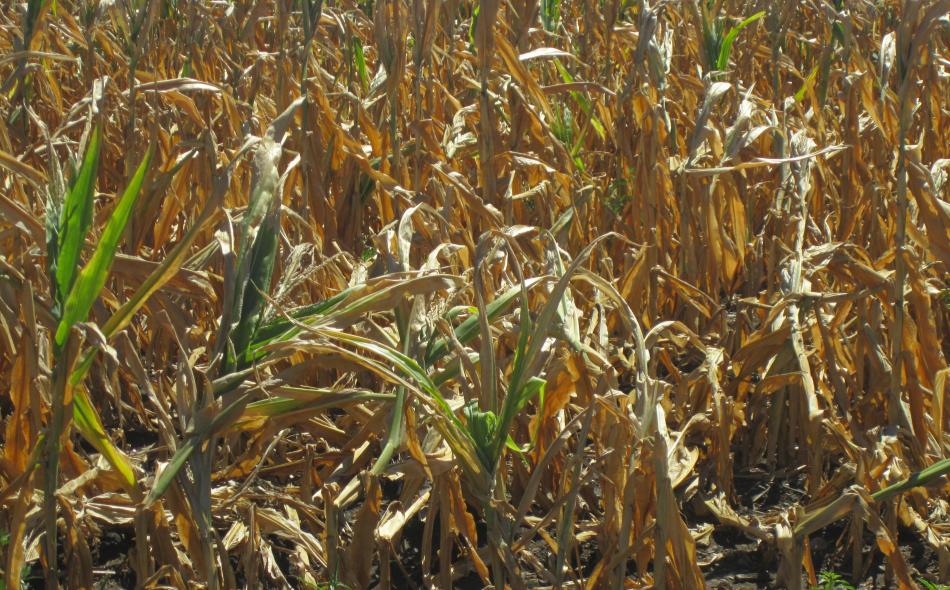 In the first blog in this series, I discussed how drought has affected me. As I walked through a Central Iowa corn field near Ames this summer, I surveyed another corn crop destroyed by the heat and dry conditions, (see photo) I wondered if this farm could survive.

I thought back to the farm I grew up on and how in the long run it did not survive. That is, it did not have “resilience” to withstand weather onslaughts, unfavorable markets and aggressive bankers.

So what the heck is resilience? An old term, but coming back into its own, at least in academic circles. And it is a good one for the times, perhaps for the rest of our rocky future.

And rocky it will be. Climate change, population pressures, decline of resources, both physical and financial, the list goes on. But first resilience.

Dr. William Reese at the University of British Columbia, in his challenging paper “Thinking Resilience” defines resilience as “the capacity of a system to withstand disturbances while still retaining its fundamental structure, function and internal feedbacks” (see also Resilience Thinking: Sustaining Ecosystems and People in a Changing World. Walker, B., and Salt, D. Island Press, N.Y. NY. 2006.)

Fancy words, but what does it mean? Reese uses a good analogy, the brittleness of a system. Can the system spring back like the ability of a car’s shock absorbers to smooth out a pothole (those of you who to drive the streets of Minneapolis can appreciate that ability).

Our modern agriculture is full of these potholes. The universal failure of pesticides (even with genetic engineering) which, over time, drives resistance of the very pests they want to control, and causes even greater crop losses than before. Or even bigger, the failure of long-term solutions to food production in the face of further increases in population and resource demand.

The field I stood in most likely has had all of the latest technologies: fertilizer placed by GIS precision planter, $300 a bag of multi stack genetically engineered seed corn, with Bt for rootworms and corn borers, and Roundup-Ready for weed control, tiling for drainage, treatment with glyphosate herbicide and of course it would have been harvested with a GIS controlled 16 row $300,00 harvester. Counting land costs, it will cost $866 per acre to grow assuming no harvest costs; yes, you read right, $866, more than your typical fast food worker might clear in a month! (Iowa’s minimum wage is $7.25/hr.)

The perception is that government and crop insurance will cover a farmer’s loss in the case of a crop failure. This is not correct. Given the many parts of the crop insurance program, the possibility that Congress will modify the program to make it more like previous crop disaster programs. But even if crop farmers are covered, animal farmers and ethanol producers will face economic crises because of the corn costs, which could rise toward an unheard-of $9.00 per bushel. Will the federal government, in a time of belt tightening, cover the disaster?  It is likely that the farming community will feel a financial loss that will take years to recover from.

Probably the big farm I visited will survive to live another day. What about the small, diversified farmer who even with several enterprises, will not have enough water for the CSA or grass for the dairy cows? Through no fault of their own, they will not be resilient enough to make it, especially if they have debts.

This is how brittle our world has become. Science, which works to make agriculture more efficient and productive, fails in the face of major disasters. Free trade will not save us, nothing to trade at world competitive prices. The variability in our natural ecosystems, which should be appreciated and managed, instead is ignored as we try to keep the system in its optimal configuration (e.g.,175-250 bushels/acre, completely mechanized, to feed into efficient hog or poultry confinements or ethanol distilleries).

Of major concern is that food production per capita is declining in spite of huge costs for inputs (and huge profits for the providers of inputs). And to make matters more complicated, our political and educational systems are showing the signs of brittleness and lack of resiliency. Congress stalemates and states are in the red. The once upon a time “land grant” universities now are operating largely to serve the profits of corporations, offering little in the way of solutions for resiliency, but more and more on ways to continue on the same broken treadmill.

Now that sustainability as a concept seems to be co-opted as a green wash term, we need to revisit the concept of resilience. This year’s drought is a good place to start. The next blog will visit the causes of climate change, and especially the role of human activity in accelerating what could be a major turning point in the world’s history.